Donald Trump Jr.
stated on October 29, 2020 in a Fox News appearance:
The number of coronavirus deaths is “almost nothing.”

Donald Trump Jr. speaks to a group of young Republicans at Dream City Church in Phoenix on June 23, 2020. (AP/Vucci)

Donald Trump Jr. falsely claimed that the number of coronavirus deaths had plummeted to "almost nothing," dismissing the impact of the pandemic on a day in which the U.S. reported a record-breaking number of new cases and roughly 1,000 more deaths.

"The reality is this: If you look, I put it up on my Instagram a couple days ago, because I went through the CDC data, because I kept hearing about new infections," Trump said, referring to the Centers for Disease Control and Prevention. "But I was like, ‘Well, why aren’t they talking about deaths?’ Oh, oh, because the number is almost nothing."

Jr. claims Coronavirus death numbers are down to “almost nothing” pic.twitter.com/NGMDLYkdsD

"If you look at that, look at my Instagram, it’s gone to almost nothing," he added.

Experts rejected Trump’s false claim about COVID-19 deaths. It came on the same day that the U.S. reported a record number of new cases and around 1,000 deaths due to the virus, according to Johns Hopkins University, the COVID Tracking Project and other sources.

"There is no other way to slice these data — 1,000 deaths per day is most assuredly not ‘nothing,’" said Brooke Nichols, an assistant professor of global health at Boston University.

She called the claim "particularly absurd" and "extraordinarily cruel" to those who have recently lost loved ones to the virus.

The death rate has declined since the spring. Some explanations that have come up in our reporting include doctors understanding the disease better and masks becoming more common.

But Amesh Adalja, a senior scholar at the Johns Hopkins Center for Health Security, said the recent daily death tallies can "by no measure" be considered "almost nothing."

The Trump administration’s coronavirus testing czar, Adm. Brett Giroir, said Oct. 28 that with the recent upticks in cases and hospitalizations, "we are starting to see the increase in deaths."

RELATED: No, fight against coronavirus isn't rounding the corner, as Donald Trump said

As the calendar turns to November, the U.S. has had more than 229,000 COVID-19 deaths, the most in the world, according to Johns Hopkins University. That’s nearly 20% of the world’s total, in a country with about 4% of the global population.

Data from Johns Hopkins University and the World Health Organization shows the U.S. has also reported more deaths on a per capita basis than a number of other similar countries.

"These are deaths that we wouldn’t normally expect," said Mary Jo Trepka, a professor and the chair of the epidemiology department at Florida International University. 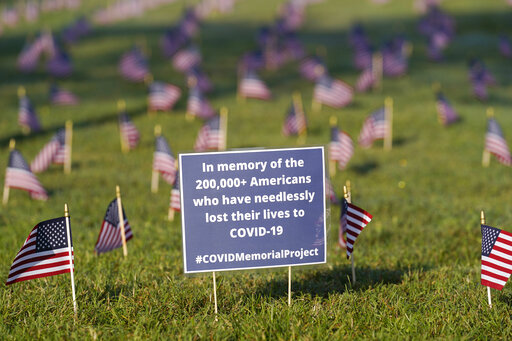 RELATED: COVID-19 by the numbers: A status report

Trump’s Instagram post shows a chart that is labeled Oct. 26. The image says that data comes from the CDC, and it includes a link that directs to the agency’s provisional death count data.

Alexis C. Madrigal, a reporter with the Atlantic who helped launch the COVID Tracking Project, noted on Twitter that Trump appeared to have made "a common misinterpretation" of what the provisional death counts are able to show.

The provisional death counts lag by a few weeks, because they are based on death certificates that take time to report and process. The CDC says its provisional death counts "may differ from other published sources." The agency says the data is "incomplete" and "will likely not include all deaths that occurred during a given time period, especially for the more recent time periods."

For those reasons, experts told PolitiFact that the provisional counts shouldn’t be used to draw conclusions about the impact of the virus in the most recent weeks.

"There’s such a delay in terms of the classification of deaths that of course it’s going to look like there’s hardly any deaths over the last couple of weeks," Trepka said.

"You can’t say anything definitive about provisional data when we know there are likely to be revisions," Adalja added.

The more telling figures, Trepka said, are the excess death estimates over time.

Scientists have warned that colder weather and state reopenings could bring a staggering death toll in the winter, as the continued coronavirus threat overlaps with the flu season.

"If things do not change, if they continue on the course we’re on, there’s going to be a whole lot of pain in this country with regard to additional cases and hospitalizations and deaths," said Dr. Anthony Fauci, the nation’s top infectious disease expert, in an Oct. 28 interview with CNBC.

Trump said the number of coronavirus deaths is "almost nothing."

Experts rejected the claim, which came on a day when the U.S. reported roughly 1,000 new coronavirus deaths. The country leads the world with over 229,000 total COVID-19 deaths.

With those numbers, it’s ridiculous to say deaths are down to "almost nothing."

Trump pointed viewers to a post on his Instagram account that appeared to show provisional death counts from the CDC. But his post left out a key CDC disclaimer, which said that such provisional counts are incomplete due to lags in reporting death certificate results. The result was a gross misrepresentation of where the trend lines are heading.

Phone interview with Mary Jo Trepka, professor and chair of the department of epidemiology at Florida International University, Oct. 30, 2020