A made-up CNN headline claims one of the largest street gangs in the country is helping put out the dozens of wildfires raging on the West Coast.

Why? Because the fires turned the sky red.

"Heartwarming: Members of Crip gang volunteer to fight wildfires after sky turns red," reads a screenshot of the headline, which was published Sept. 12 on Instagram.

"These crip gang members suit up to help fight wildfires," sayss a caption under a related photo, which shows purported gang members alongside firefighters. "Due to their ongoing feud with the bloods, they despise all things red; after the sky in their area turned red, they put (down) the guns and picked up the hoses." 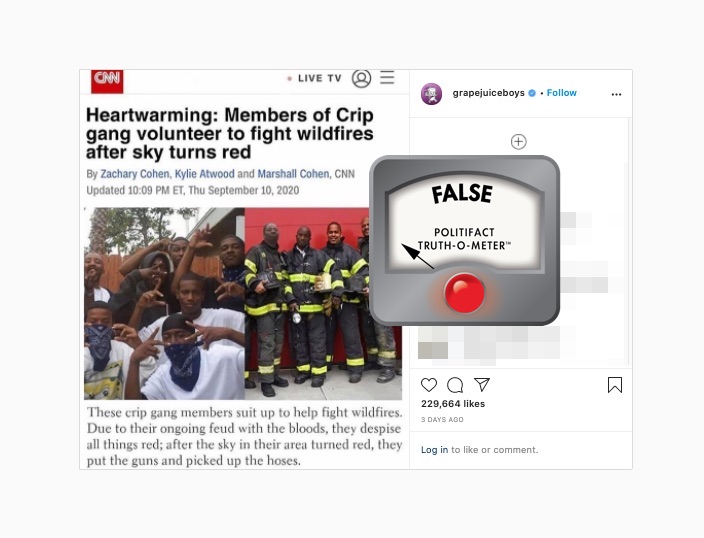 This post was flagged as part of Facebook’s efforts to combat false news and misinformation on its News Feed. (Read more about our partnership with Facebook, which owns Instagram.) It has more than 229,000 likes.

The Crips is a Los Angeles gang that has been associated with several illegal activities, such as drug dealing, theft and murder. They have a rivalry with a gang called the Bloods, whose members wear red accessories to identify themselves. The Crips, meanwhile, tend to wear blue or black.

It is not true that the Crips were inspired by their disdain for red to fight the West Coast wildfires, which have killed at least 36 people across three states.

The fabricated headline was published by Grape Juice Boys — a well-known meme account with more than 3 million followers on Instagram. Other fact-checkers have debunked it.

To avid Instagram users, it may seem obvious that a post from Grape Juice Boys would be satirical. But some users who shared the made-up CNN headline expressed doubt about its authenticity, so we took a closer look.

The meme was originally published on a website called iFunny, a collection of comical images, memes and videos. It was created by doctoring a real article that CNN published Sept. 10.

That article is about United States sanctions on a Ukrainian lawmaker — not gang members putting out wildfires.

"It is not a screenshot from CNN. It’s been fabricated," said Emily Kohn, senior director of communications for CNN.

Lead Stories, "Fact Check: Members Of Crip Gang Did NOT Volunteer To Fight Wildfires Because The Sky Is Red," Sept. 12, 2020