Instagram posts
stated on September 22, 2020 in an image:
Quotes Sen. Mitt Romney as saying: “The Merrick Garland decision wasn’t unfair & the notion that someone has to pay the price to make up for it is wrong.”

Sen. Mitt Romney, R-Utah, leaves the Senate Chamber after a procedural vote, at the Capitol in Washington on Sept. 21, 2020. (AP)

As Senate Republicans prepare to vote on a Supreme Court nominee to fill the vacancy left by Justice Ruth Bader Ginsburg, social media posts are putting words in the mouth of one of the chamber’s more moderate members.

In 2016, Republican senators blocked the appointment of Judge Merrick Garland, whom former President Barack Obama nominated that March, to the Supreme Court because it was too close to the election. Now flash forward to 2020.

After Ginsburg died Sept. 18, Senate Majority Leader Mitch McConnell, R-Ky., said President Donald Trump’s nominee — which he is expected to announce Sept. 26 — "will receive a vote on the floor of the United States Senate." A Sept. 22 Instagram post says Sen. Mitt Romney, R-Utah, has weighed in on that decision. 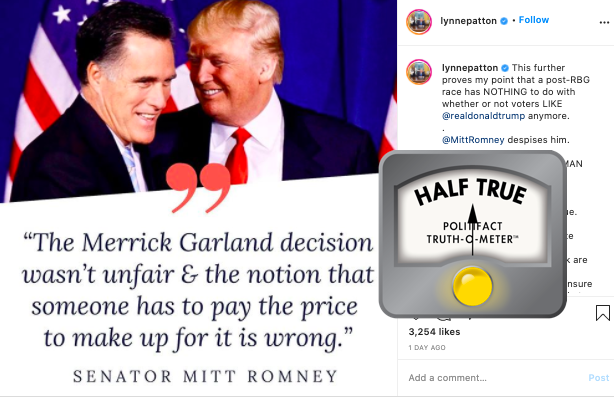 "The Merrick Garland decision wasn’t unfair & the notion that someone has to pay the price to make up for it is wrong," says a quote attributed to Romney in the post.

"This further proves my point that a post-RBG race has NOTHING to do with whether or not voters LIKE @realdonaldtrump anymore," wrote Lynne Patton, a longtime Donald Trump associate who works in the Department of Housing and Urban Development, in a caption.

The post was flagged as part of Facebook’s efforts to combat false news and misinformation on its News Feed. (Read more about our partnership with Facebook, which owns Instagram.)

Romney was the only Republican who voted in favor of convicting Trump of abuse of power in a February impeachment vote and has been reported as a potential swing vote in the Senate. So we wanted to check whether he actually said the quote cited in the Instagram post.

The post is a paraphrase of comments that Romney made Sept. 22 after releasing a statement saying he’s in favor of voting on a nominee to fill the Supreme Court vacancy before Election Day.

Here’s what Romney said in an interview with reporters when asked about the decision to block Garland’s nomination in 2016:

"I wasn't there. I think there's some perception on the part of some writers and others that gee, what happened with Merrick Garland was unfair. I don't agree with that. I don't know whether you think it was a good decision or not but it wasn't unfair because it was consistent with history, it was consistent with precedent. It was consistent with the Constitution. So the idea that the Merrick Garland decision was unfair and therefore it has to be made up by doing something, which also wouldn't make a lot of sense — which is saying to President Trump, ‘You can't get your nominee either’ — that just doesn't follow for me.

Romney did say the decision to block Garland’s appointment to the Supreme Court "wasn’t unfair" and that he doesn’t agree with the notion that Republicans should abstain from confirming a new justice before Nov. 3. But he did not say the quote attributed to him in the Instagram post.