In this Jan. 27, 2021 file photo, President Joe Biden speaks in the State Dining Room of the White House in Washington. (AP)

Facebook has some good news for anyone with student loans: President Joe Biden has already canceled them. Or did he?

In a Feb. 2 post, one user wrote that her student loan debt had mysteriously vanished.

"Wow, just checked my Credit Karma and Biden really did wipe away my student loans $20k worth of debt," the user wrote. "God is good!"

This post was flagged as part of Facebook’s efforts to combat false news and misinformation on its News Feed. (Read more about our partnership with Facebook.) A few other Facebook users shared in the celebration, so we wanted to check this post out. 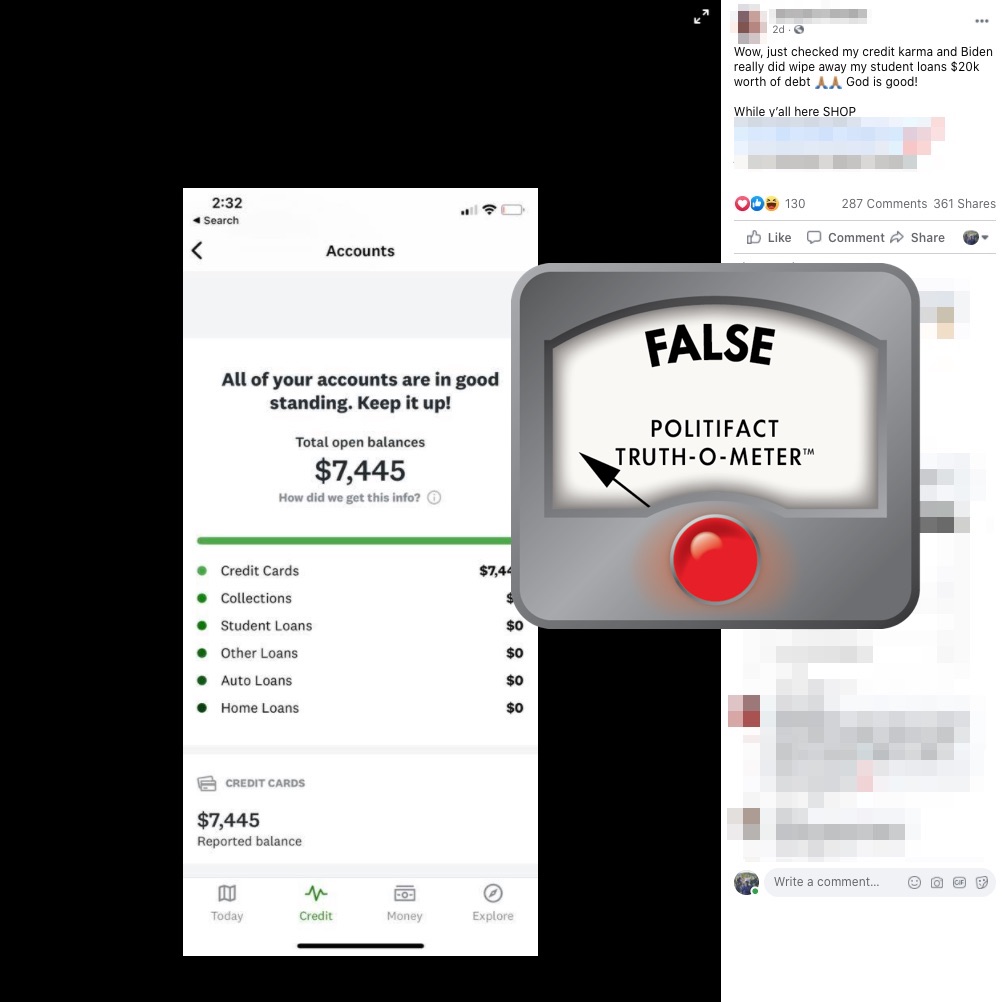 During his presidential campaign, Biden promised to make federal student loan payments more affordable for Americans — particularly people with low incomes and public servants. But those plans have not yet come to fruition, and Biden hasn’t said he’d cancel student loans for everyone.

Biden has extended a pause on federal student loan payments, but none of the executive orders he has signed so far follow through on his campaign promises. In December, he said it’s "pretty questionable" whether he’d have the power to forgive up to $50,000 of debt via executive order.

Congress has not passed legislation canceling student loan debt, either.

On Jan. 20, the day of Biden’s inauguration, the president introduced a $1.9 trillion coronavirus relief package. Among its provisions are $1,400 stimulus checks for most Americans, an unemployment insurance supplement of $400 per week and an increase in the federal minimum wage.

Student loan debt forgiveness is not mentioned in the plan. Neither loan forgiveness nor a payment pause were included in the December relief package.

We can’t speak to what may have happened to the Facebook user’s student loan debt, but the post that credits Biden for wiping it away is inaccurate. We rate it False.

CNBC, "New coronavirus stimulus bill does not include student loan relief—mandatory payments are set to resume in February 2021," Dec. 21, 2020

JoeBiden.com, THE BIDEN PLAN TO BUILD BACK BETTER BY ADVANCING RACIAL EQUITY ACROSS THE AMERICAN ECONOMY

The Washington Post, "Opinion: Trump is trashing the government on his way out. Biden is confident he can fix it." Dec. 23, 2020