Tucker Carlson
stated on February 22, 2021 in a TV segment:
"There's no evidence that white supremacists were responsible for what happened on Jan. 6. That's a lie.”

Rioters gather outside the Capitol in Washington on Jan. 6, 2021. (AP/Ceneta)

Fox News host Tucker Carlson downplayed the involvement of racially motivated extremist groups in the Jan. 6 attack on the U.S. Capitol, falsely suggesting that the mob of pro-Trump rioters who violently stormed the building did not include white supremacists.

"There's no evidence that white supremacists were responsible for what happened on Jan. 6. That's a lie," Carlson said Feb. 22 on his TV show. "And contrary to what you've been hearing, there's also no evidence this was a, quote, 'armed insurrection.'"

During the segment, Carlson, whose primetime show is among the most-watched cable news programs, interviewed the author of a blog post that argued the riot did not amount to an armed insurrection. PolitiFact previously rated that claim Pants on Fire.

For this fact-check, we’ll focus on Carlson’s claim about white supremacists.

Carlson was responding to attorney general nominee Merrick Garland’s pledge at his confirmation hearing to supervise the prosecution of "white supremacists and others" involved in the riot.

Experts on extremism have described white supremacists as a top domestic terrorist threat, and so has FBI director Christopher Wray. In 2019, Carlson called white supremacy a hoax.

Many participants at the Capitol riot were not known white supremacists, and with investigations ongoing, it’s difficult to say how responsible any one person or group was for what happened.

But court documents, public records and documentary evidence have shown that several people with known ties to white supremacist groups were involved in the attack, and that many symbols of white supremacy were displayed.

"White supremacists and rebranded alt-right rioters were assuredly there, but there was also a wide variety of other insurrectionists present who share a set of unifying grievances with hardened bigots, who do not necessarily buy into full-blown white supremacy," said Brian Levin director of the Center for the Study of Hate & Extremism at California State University, San Bernardino.

On Feb. 23, in a Senate hearing on the Capitol’s security failures, Sen. Amy Klobuchar, D-Minn., asked the acting D.C. police chief, the former Capitol Police chief and the former House and Senate sergeants-at-arms if the attack "involved white supremacist and extremist groups."

All the officials replied: "Yes."

Fox News did not respond to a request for comment.

Substantial evidence shows extremist groups, including people who have publicly expressed support for white supremacist ideals, were among those in the crowd.

The New York Times reported Feb. 21 that while most of the rioters were supporters of former President Donald Trump, members of right-wing extremist groups played an outsize role in the riot and were charged with some of the most serious crimes, including conspiracy charges, which indicate a level of planning and coordination.

Of the more than 230 people charged so far, 31 were known to have ties to a militant extremist group, the Times found. That tracks with what Oren Segal, the vice president of the Anti-Defamation League’s Center on Extremism, told PolitiFact.

"The emerging snapshot of the insurrectionists shows a range of right-wing extremists united by their fury with the perceived large-scale betrayal by ‘unprincipled’ legislators," Segal said.

Extremist figures at the Capitol included members of the Proud Boys, a far-right organization that celebrates Western culture and male superiority. The group gained notoriety after Trump said in a debate that the group should "stand back and stand by."

The group has rejected claims that it promotes white supremacy. But Michael Jensen, a senior researcher with the National Consortium for the Study of Terrorism and Responses to Terrorism at the University of Maryland, said some members have known ties to other white supremacist groups or have publicly expressed white supremacist views.

A Wall Street Journal video investigation found that Proud Boys members were "at the forefront" of many of the key moments during the Jan. 6 seige. 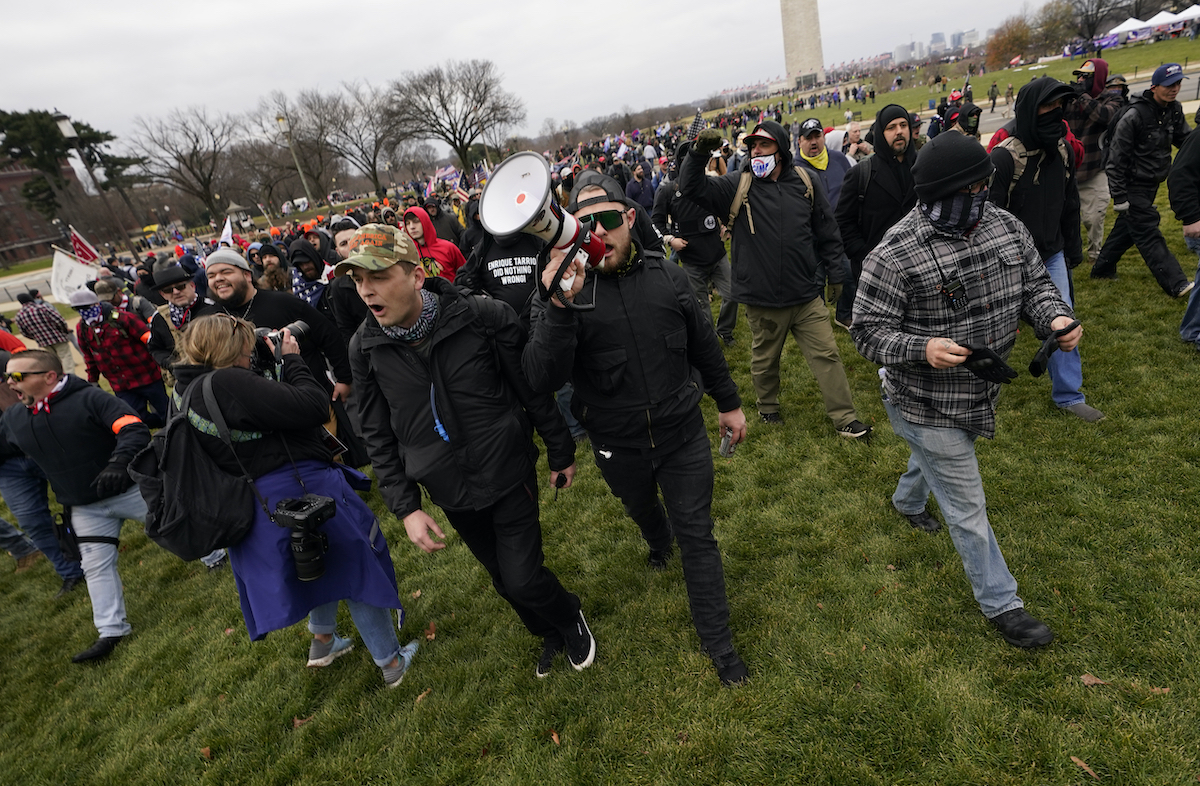 Ethan Nordean, with a bullhorn, leads members of the far-right group Proud Boys in marching before the riot at the U.S. Capitol on Jan. 6, 2021. Nordean, 30, has described himself as a leader of the Seattle chapter of the Proud Boys. (AP)

Other figures at the riot had explicit white supremacist ties. Some were associated, for example, with the Groypers, a white supremacist group defined by a loose network of people who support the far-right activist and podcaster Nick Fuentes, or the Nationalist Socialist Club, a neo-Nazi group, Segal said. Others, such as far-right media personality Tim Gionet, or Baked Alaska, have expressed white supremacist views but are unaffiliated with any specific group.

The ADL identified 212 of what it believes were about 800 people who breached the Capitol, Segal said. Among those identified, Segal said the ADL has counted 17 Proud Boys, six people associated with an anti-government militant group known as the Oath Keepers, and 10 people with ties to the Groypers or other white supremacist groups.

"They were certainly present at the Capitol on Jan. 6, and several participated in storming the building," Jensen said, pointing to people like Gionet and Bryan Betancur, a self-professed white supremacist who was seen wearing a Proud Boys shirt and posing with a Confederate flag.

The presence of white supremacists was also marked by prominently displayed symbols, including some that are "overtly racist" and others that are coded or co-opted but resonate among followers of far-right extremist groups, said Levin.

One man, Robert Packer, was seen in a "Camp Auschwitz" T-shirt, a reference to a complex of concentration camps used during the Holocaust. Others waved Confederate flags, flashed "white power" symbols, showcased "Pepe the frog" imagery and more, Levin said. 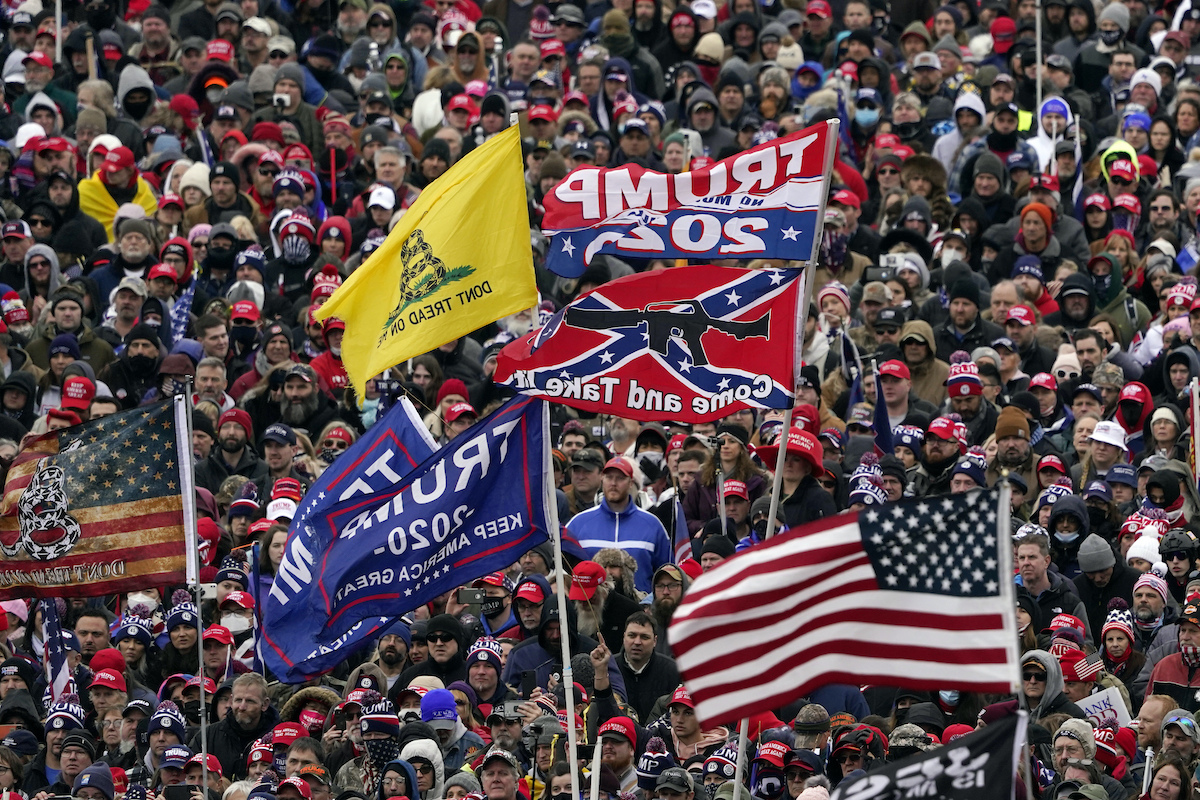 Supporters listen as President Donald Trump speaks during a rally in Washington on Jan. 6, 2021, shortly before rioters stormed the U.S. Capitol. (AP)

Rioters also erected a hanging gallows, which Levin said is a symbol for white supremacists and other alt-right figures signaling a day when "government leaders and minorities are hanged."

The Washington Post combed through footage from the riot and identified many such symbols showing support for white supremacy and other far-right causes and groups.

Carlson said, "There's no evidence that white supremacists were responsible for what happened on Jan. 6. That's a lie."

Not all of the rioters at the Capitol were extremists or white supremacists. But several people with known ties to white supremacist groups were involved, including some people now facing conspiracy charges. Symbols of white supremacy were also prominently on display.

The New York Times, "Arrested in Capitol Riot: Organized Militants and a Horde of Radicals," Feb. 4, 2021

PolitiFact, "In context: Donald Trump’s ‘stand back and stand by’ debate comments on white supremacists," Sept. 30, 2020

Email interview with Oren Segal, vice president of the Center on Extremism at the Anti-Defamation League, Feb. 23, 2021

Email interview with Michael Jensen, a senior researcher with the National Consortium for the Study of Terrorism and Responses to Terrorism at the University of Maryland, Feb. 23, 2021

Email interview with Brian Levin, director of the Center for the Study of Hate & Extremism at California State University, San Bernardino, Feb. 23, 2021