Some social media users on Twitter and other platforms raised alarms over a video that they claimed shows a recruiter pitching college women on contributing pornography for OnlyFans, an internet subscription platform popular for hosting adult content.

The original video was posted Feb. 9 to Instagram by a social media influencer who goes by the name Bendadonnn, and who has hundreds of thousands of followers on the platform. He did not respond to a request for comment sent via Instagram direct message.

The 45-second video shows him wearing a shirt that says "OnlyFans Recruiter" while distributing brochures and urging the students at Florida International University in Miami to consider contributing adult content to OnlyFans. He tells women passing by that the company could be their stepping stone to "financial freedom."

The man is not a real OnlyFans recruiter, however; his video appeared to be created as a joke.

The caption on his Instagram post featured 20 laughing-face emojis. The comments under it included comments from several professional athletes, including Los Angeles Rams wide receiver Odell Beckham Jr., applauding Bendadonnn for his "acting." And on Twitter days later, Bendadonnn wrote that the video "pissed em off" and was "impeccable acting."

But that didn’t stop some social media users from reposting his video as though it depicted a real OnlyFans recruiter who was running a table at a sponsored campus event.

The tweet was viewed hundreds of thousands of times and shared widely, including by one host of the conservative website the Daily Wire, who wrote that the recruiter was "creepy." 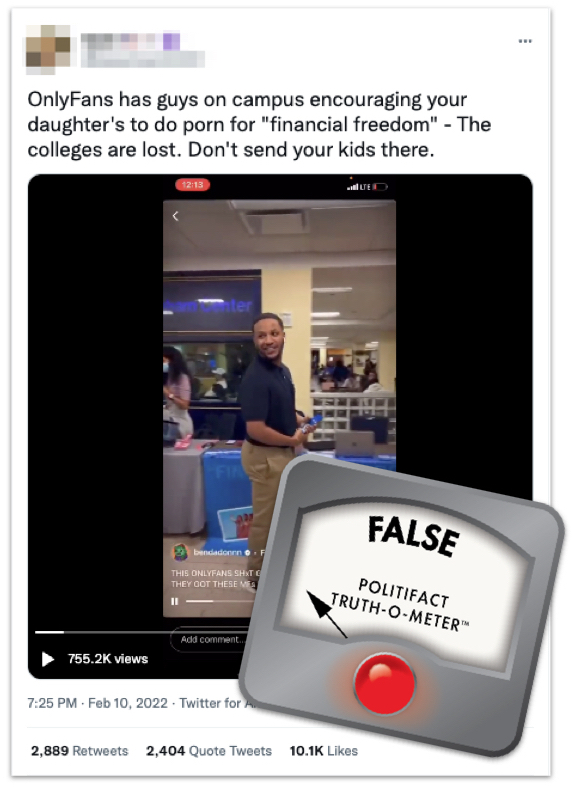 A Feb. 10 tweet falsely cast an Instagram video as an authentic portrayal of an OnlyFans recruiter on a college campus.

Similar posts on other platforms were flagged as part of Facebook’s efforts to combat false news and misinformation on its News Feed. (Read more about our partnership with Facebook.)

In separate statements to PolitiFact, spokespeople for Florida International University and OnlyFans confirmed that Bendadonnn isn’t affiliated with either the university or the company.

"Last week, a person claiming to represent a private business recorded a video in the Graham Center," said Maydel Santana, the university spokesperson. "The individual’s use of the space was in violation of our campus policies, and he was quickly asked to leave campus. This person is not a representative of FIU and their actions do not reflect the values of our community."

In its statement, OnlyFans said: "OnlyFans is not affiliated with this individual and he is not employed by nor does he represent the company in any way. These actions are not sanctioned by OnlyFans and fall outside our acceptable use policy, which prohibits impersonating OnlyFans or one of its employees."