Tweets
stated on March 13, 2022 in tweets:
A Ukrainian combat medic who died in February was seen in a video Ukraine President Volodymyr Zelensky posted of his visit to see wounded soldiers.

Russia’s state-controlled media outlet Russia Today cast doubt on the authenticity of Ukraine President Volodymyr Zelensky’s recent military hospital visit, suggesting without evidence that a video he posted with wounded soldiers may have been pre-recorded or staged.

Zelensky posted the video of his visit on Telegram on March 13, along with photos on his official government website. Shortly after, Russia Today, Russian commentator Maria Dubovikova and other social media users falsely claimed that a woman who accompanied him was actually a combat medic who had been killed at the beginning of Russia’s invasion.

"Zelensky published a video in which he allegedly visited a hospital with wounded soldiers of the Armed Forces of Ukraine today," states the translated version of a March 13 post from RT’s Russian-language Twitter account. "But the footage showed a doctor, Inna Derusova, who died on Feb. 26."

"Attentive people mentioned a problem w/ today’s video of Zelenskiy visiting a hospital," Dubovikova wrote in one of two related tweets, which no longer appear on her page. "There is physician Inna Derusova in the video, but she is dead since Feb. 26."

She added: "Thus the video is far from being even recent."

These posts echo viral internet rumors that baselessly claim the war is staged, scripted or exaggerated with crisis actors.

The claim at the heart of the posts is wrong. BBC disinformation journalist Shayan Sardarizadeh, the Atlantic Council’s Digital Forensic Research Lab, and fact-checking organizations from Spain and Ukraine each verified the identity of the woman in the video.

PolitiFact could not confirm exactly where or when the video of Zelensky’s hospital visit was filmed. But the video does not show Derusova, a combat medic who died in a February artillery attack, and who was honored posthumously with a Hero of Ukraine title. Instead, the woman shown beside Zelensky in the video is Tetiana Ostashchenko. She is a military doctor and the commander of the medical forces for the Ukrainian Armed Forces. 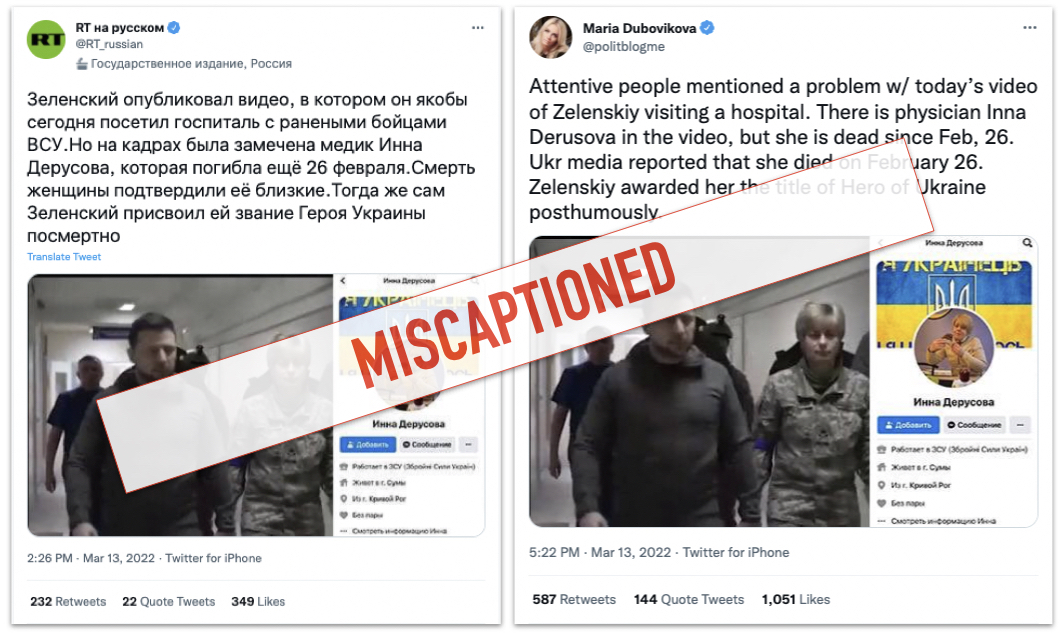 The false rumor about Zelensky’s visit spread to blog sites, pro-Trump forums, YouTube, Telegram and Instagram. They were flagged as part of Facebook’s efforts to combat false news and misinformation on its News Feed. (Read more about our partnership with Facebook.)