What is Congress doing besides impeachment?

President Donald Trump and his Republican allies have charged that House Democrats are putting impeachment ahead of their legislative duties.

House Speaker Nancy Pelosi, D-Calif., says it is the other way around. She wrote in a recent letter to colleagues that Senate Majority Leader Mitch McConnell, R-Ky., has "scores of critical bills sitting on his desk."

With impeachment grabbing the headlines, we decided to look at what else has been passing in Congress this fall. The short answer is not much, not even on bipartisan priorities.

In her letter, Pelosi listed three votes she intends to hold soon and eight bills that are stalled in the Senate. Her spokesman, Drew Hammill, also cited 17 other major bills and resolutions that the House has passed or agreed to since launching its impeachment inquiry.

House members have passed or agreed to 389 bills and 151 resolutions since January, when Democrats took control. But McConnell has left many untouched in the GOP-led Senate, having vowed to block their progressive policies as the "grim reaper" to their bills on issues such as election security and background checks.

The Senate, for its part, has passed or agreed to 132 bills and 284 resolutions since January, with 80 bills originating in its chamber. McConnell, whose office did not respond to our inquiry, has said his priorities include funding the government, approving Trump’s North American trade deal and confirming judicial nominees. 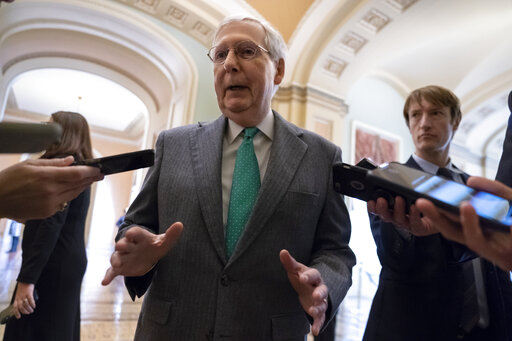 Senate Majority Leader Mitch McConnell, R-Ky., speaks to reporters outside the chamber at the Capitol in Washington on Nov. 6, 2019. (AP/Applewhite)

"There’s still a lot more work that needs to be done and can be done in the second session," meaning the second and final year of this Congress’ term, said Franz Wuerfmannsdobler, a senior adviser at the Bipartisan Policy Center.

For starters, Congress is staring down the possibility of another government shutdown. The government is being funded at last year’s spending levels under a short-term spending bill that is set to expire Nov. 21.

If Congress cannot agree on a year-long budget by that deadline, they will have to buy more time with another short-term spending bill, or else the government will shut down.

The House has passed 10 of the 12 appropriations bills that Congress must pass each year to fund the government’s agencies, according to the nonpartisan Committee for a Responsible Federal Budget. The Senate has passed four of the required 12.

A short-term solution could extend last year’s budget into December or early next year, Wuerfmannsdobler said.

But Trump could be a wild card in the negotiations as he faces impeachment and pushes to fulfill his campaign promise of building a border wall.

"That is definitely the unknown here, if (Trump) sees an advantage to shutting it down again," Wuerfmannsdobler said. "There’s probably bipartisan support for keeping the extension, but you just have to look back to last year to see that it’s very uncertain at this point."

Disagreement over funding for a border wall also played a role in the last government shutdown, which spanned 35 days and was the longest in U.S. history.

Both parties have also pushed for legislation to lower prescription drug prices, but they have not agreed on a specific course of action.

House Democrats are moving forward with a major bill that they renamed in honor of the late Rep. Elijah Cummings of Maryland, who died in October. The House bill aims to lower prescription drug prices for seniors by letting Medicare negotiate directly with drugmakers and setting a new maximum out-of-pocket price for Medicare patients.

According to a preliminary analysis from the nonpartisan Congressional Budget Office, the bill would reduce federal spending on Medicare by approximately $345 billion over 10 years, with most savings resulting from a provision requiring manufacturers of certain drugs to negotiate prices with the federal government based on average prices internationally.

The CBO also estimated that drug manufacturers would lose money and scale back spending on research, which could result in eight to 15 fewer new drugs being introduced over 10 years.

In the Senate, a bipartisan bill from Sen. Chuck Grassley, R-Iowa, would require drug companies to pay rebates to Medicare if they raise prices beyond the inflation rate, and create a maximum out-of-pocket price for Medicare patients. But it would not let Medicare negotiate prices.

Trump tweeted support for both bills in September. But the next month, he called Pelosi’s efforts "camouflage" for impeachment. The Associated Press reported that the White House now considers the House version "unworkable," meaning Congress could be at an impasse.

Nancy Pelosi just said that she is interested in lowering prescription drug prices & working on the desperately needed USMCA. She is incapable of working on either. It is just camouflage for trying to win an election through impeachment. The Do Nothing Democrats are stuck in mud!

Still, the House Ways and Means Committee approved the House version on Oct. 22. Hammill said Pelosi will likely schedule a full vote for November or December.

Matthew Fiedler, a health economist at the Brookings Institution, said he is "doubtful" that any meaningful drug pricing legislation will pass in the near future, since the White House opposes the House bill and many Democrats view the Senate alternative as a "half measure."

Fielder said the House bill makes much more fundamental changes that would lead to larger reductions in drug prices than the Senate bill. But both versions would reduce federal spending on prescription drugs, lower prices and lead to more overall usage.

Stacie Dusetzina, professor of health policy at Vanderbilt University, said that high public interest makes her hopeful for a solution.

"Medicare beneficiaries, in particular those who have very high spending today, would see some important changes in what they pay for their drugs," she said.

Both Pelosi and McConnell have listed the U.S.-Mexico-Canada Agreement, the trade deal Trump negotiated last year to replace the North American Free Trade Agreement, as a legislative priority.

The USMCA was signed by Trump but awaits congressional approval. It was expected to take effect at the start of 2020. 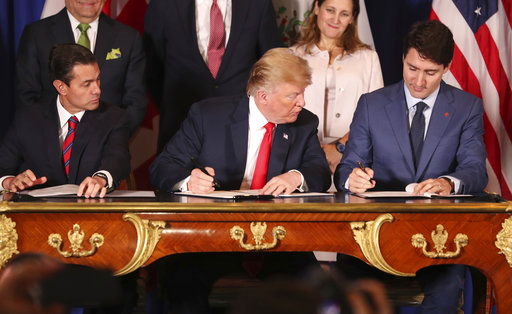 The deal would expand the United States’ reach into Canada’s milk and pharmaceutical markets, strengthen labor and environmental rights, broaden protections over intellectual property, and take steps to increase the share of North American parts used in making cars.

"This is the Trump administration’s renegotiation of NAFTA," said Edward Alden, a senior fellow at the Council on Foreign Relations.

The timeline for approval will likely depend on negotiations over the agreement, but Alden said it is "not terribly urgent" because NAFTA will remain in effect until the USMCA gets ratified.

"The Democrats have historically been extremely divided on trade in general and NAFTA in particular," he said, so Pelosi will have to decide whether it’s "worth dividing the party." She has said Democrats want to secure stronger worker and environmental protections in the deal.

"Pelosi has said that there ought to be a path to yes," he added. "I’m just not clear at the end of the day there is."

Another priority for Pelosi and House Democrats is the Voting Rights Advancement Act of 2019, a House bill to restore provisions from the Voting Rights Act of 1965 that the Supreme Court struck down in 2013. A companion bill exists in the Senate.

The case, Shelby County vs. Holder, invalidated provisions in the 1965 act that required states and local governments with histories of voter suppression to get federal preclearance before changing their voting laws. The House bill would re-implement similar requirements.

The bill was reported out of committee Oct. 23, and Hammill said it should be brought to a full vote this month. But Senate Republicans are not expected to move on it, in part because of a provision requiring automatic preclearance of voter ID laws, according to Bloomberg Law.

House bills stuck in the Senate

In addition to the trade deal and bills on drug pricing and voting rights, Hammill said the SHIELD Act passed Oct. 23 and the Protect Against Conflict by Turkey Act passed Oct. 29 have been priorities for House Democrats. We counted nearly 300 House bills that are stuck in the Senate.

The SHIELD Act would require political campaigns to report foreign election interference, while the PACT Act would put sanctions on Turkey related to its military invasion of northern Syria.

Beyond that, Pelosi’s letter cited eight of the House bills McConnell has stalled in the Senate:

• The For The People Act would make Election Day a federal holiday, expand voter registration, restrict the removal of voters from voter rolls, and create programs to encourage small-dollar political donations.

• The Bipartisan Background Checks Act would ban the private transfer of firearms without a licensed background check.

• The Paycheck Fairness Act would strengthen penalties for employers that discriminate on the basis of gender.

• The VAWA Reauthorization Act would reauthorize the 1994 Violence Against Women Act, which protects victims on domestic violence, for five years.

• The Climate Action Now Act would prohibit the use of federal money to withdraw the United States from the Paris Agreement on climate change.

• The Equality Act would protect LGBTQ people from discrimination in housing, the workplace and public accommodations.

• The Dream and Promise Act would grant certain young undocumented immigrants who came to the United States as children a path to permanent residency status.

• The Raise the Wage Act would bring the minimum wage to $15 per hour after six years.

Senate bills stuck in the House

Of the 80 bills that started in the Senate and passed, we counted 58 that the House has not also passed, although many of those have been sent to various committees for consideration.

McConnell’s office did not respond to our request for examples of Senate priorities the House is blocking. One major Senate proposal Pelosi refused to consider was the Strengthening America’s Security in the Middle East Act, which Republicans introduced in January.

The bill would allow local and state governments to penalize companies for boycotting Israel, extend support to Jordan and slap more sanctions on supporters of the Syrian government. Democrats in both chambers dismissed the bill on free speech grounds, but the House later passed a far less sweeping resolution to condemn the boycott-Israel movement.

House Speaker Nancy Pelosi, "Dear Colleague on Legislating For The People in the New Phase of the Impeachment Inquiry," Nov. 2, 2019

Congress.gov, "Opposing efforts to delegitimize the State of Israel and the Global Boycott, Divestment, and Sanctions Movement targeting Israel," March 21, 2019

Senate Majority Leader Mitch McConnell, "While Democrats Obsess Over Impeachment, Critical Congressional Business To Boost Our Economy And Support Our Troops Is Falling By The Wayside," Nov. 5, 2019

The New York Times, "Tariff Threats Aside, the Senate Is Where Action Goes to Die," June 6, 2019

PolitiFact, "Fact-checking Donald Trump's claim that drug prices are going down," May 22, 2019