Top U.S. diplomat in Ukraine William Taylor, left, and Career Foreign Service officer George Kent are sworn in prior to testifying before the House Intelligence Committee on Capitol Hill in Washington on Nov. 13, 2019. (AP)

This story was updated.

The first public presidential impeachment hearings in two decades opened with Intelligence Committee chairman Rep. Adam Schiff, D-Calif., saying the hearings would attempt to answer a key question: "Whether President Trump sought to condition official acts, such as a White House meeting or U.S. military assistance, on Ukraine’s willingness to assist with two political investigations that would help his re-election campaign?"

The ranking Republican on the Intelligence Committee Rep. Devin Nunes, R-Calif., dismissed the inquiry as a "low-rent Ukrainian sequel" to the investigation of links between Russia and the 2016 Trump campaign. Nunes painted a picture of Democrats lurching from one effort to topple Trump to the next.

Democrats focused on details of the delay in aid. Republicans noted that the aid ultimately flowed and challenged the motives of Democrats.

Here is some of the back and forth, fact-checked. 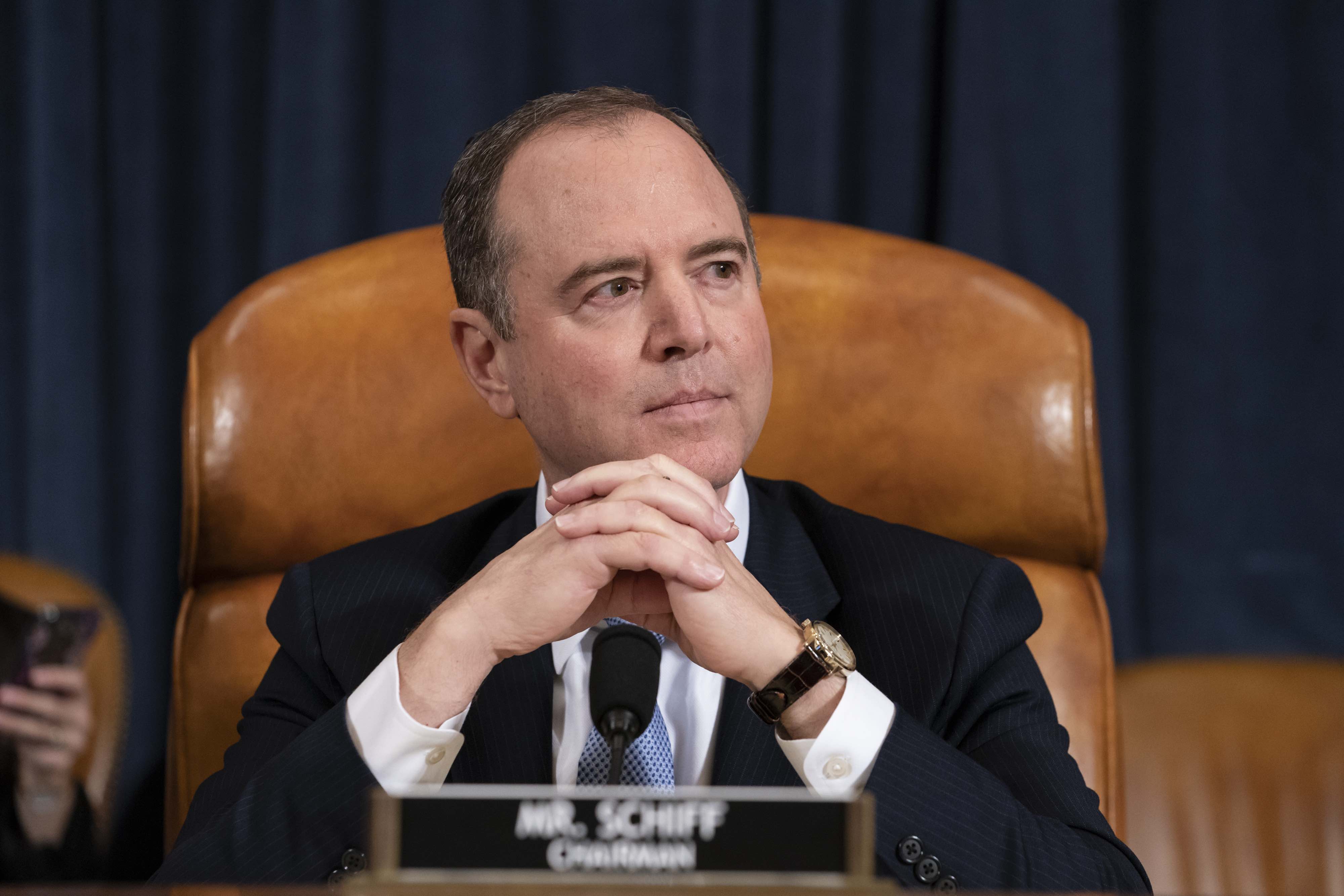 Intelligence Chairman Adam Schiff, D-Calif.: "I do not know the identity of the whistleblower."

Wanting to draw attention to the whistleblower whose account launched an impeachment inquiry, U.S. Rep. Jim Jordan, R-Ohio, asked Schiff when the committee would vote on having the whistleblower appear in a closed-door session.

"You are the only member who knows who that individual is," Jordan said. "Your staff is the only staff of any member of Congress that's had a chance to talk with that individual."

Schiff replied: "As the gentleman knows, that's a false statement. I do not know the identity of the whistleblower. I'm determined to make sure that identity is protected."

Schiff's staff was contacted by the whistleblower. It's possible Schiff himself might not know the person's identity, but it's reasonable to think his team knows.

The New York Times reported Oct. 2 that shortly before filing a whistleblower report, a CIA officer approached a House staffer. The staffer told the whistleblower to get a lawyer and meet with the Inspector General for the intelligence community.

"Like other whistle-blowers have done before and since under Republican and Democratic-controlled committees, the whistleblower contacted the committee for guidance on how to report possible wrongdoing within the jurisdiction of the intelligence community," said Patrick Boland, a spokesman for Schiff, told the newspaper.

The New York Times reported the House staffer did not share the identity of the CIA officer with Schiff.

We rated Schiff’s earlier claim that his committee had no contact with the whistleblower as False.

Nunes’ statement inaccurately downplays military aid given to Ukraine under Obama to fight Russian aggression. While the Obama administration refused to provide lethal weapons in 2014, it did provide extensive military and security aid.

Obama rejected a request from Ukrainian President Petro Poroshenko for lethal aid that included Javelin anti-tank missiles. (Trump later approved the sale of them.) U.S. officials were concerned that providing the Javelins to Ukraine would escalate their conflict with Russia, which had invaded Crimea.

The help didn’t stop: Between 2014 and 2016, the United States committed more than $600 million in security assistance to Ukraine. Under Obama, the federal government started the Ukraine Security Assistance Initiative, which sent other kinds of U.S. military equipment to the country. From 2016 to 2019, Congress appropriated $850 million.

In their Nov. 13 testimony, diplomats George Kent and William Taylor compared the U.S. aid to Ukraine with foreign help that U.S. revolutionaries needed to defeat the British in the country’s earliest days.

This inaccurate talking point has been regularly repeated. Like Nunes, Trump has referred to the aid from Obama as "pillows and sheets." Former Ukraine President Poroshenko had used similar language in 2014, and so did the late Sen. John McCain in 2015. 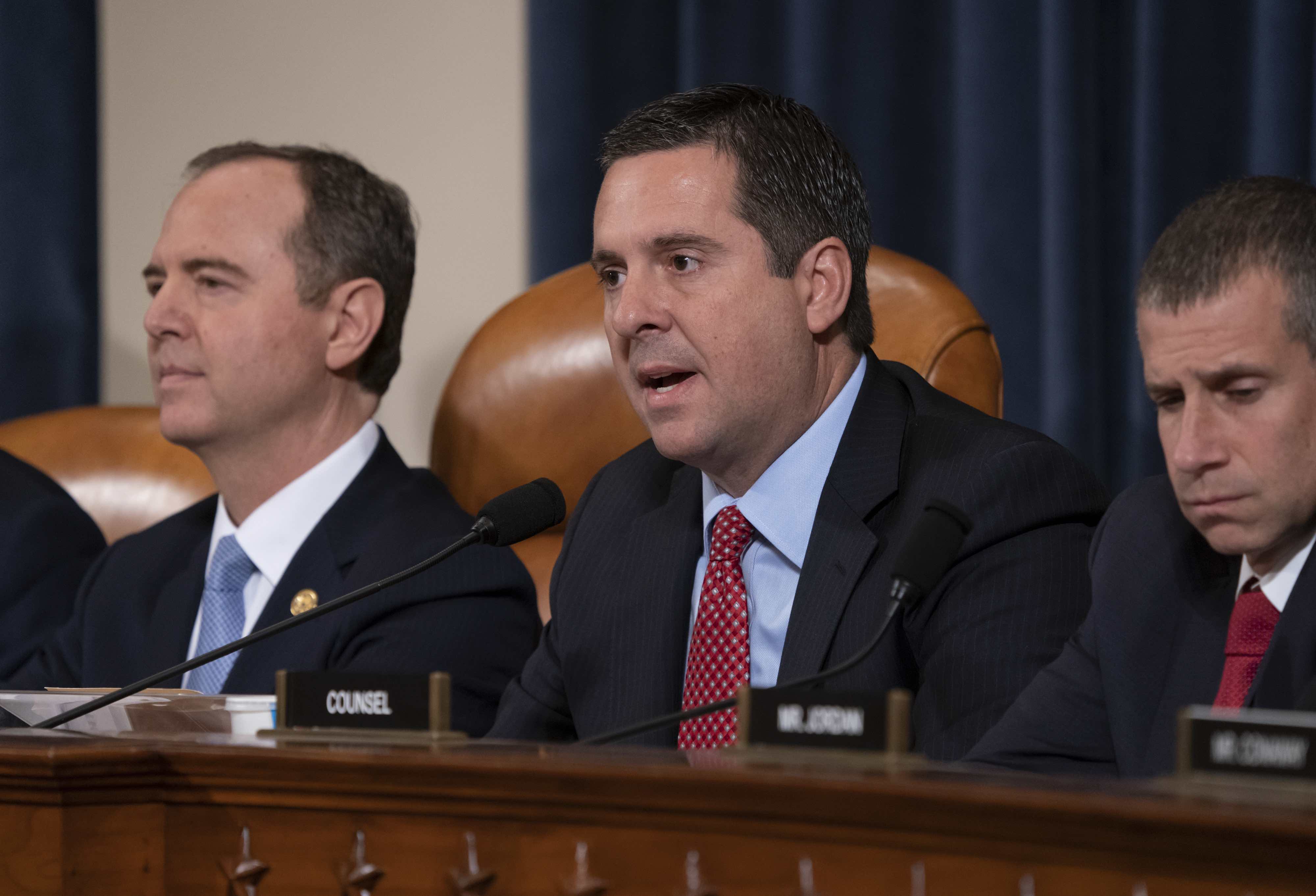 Rep. Devin Nunes: Democrats tried "to obtain nude pictures of Trump from Russian pranksters who pretended to be Ukrainian officials."

Russian pranksters did record a call with Schiff in April 2017, and they did say there were nude photos of Trump with a Russian model. They said they had recorded calls of the model and her friend talking about sharing the photos with the Russian government.

In the call with the pranksters, Schiff asked about the audio recordings, but not nude photos. He also said he intended to involve the FBI.

RELATED: Did you know, now through Dec. 31, any new donation to PolitiFact will be tripled? For a nonprofit like us, this is a big deal and will help us deliver the kind of important fact-checking you’ve come to expect, every day. Give today and triple the impact of your donation.

"We would welcome a chance to get copies of those recordings, so we will try to work with the FBI to figure out along with your staff how we can get copies of those," Schiff according to the video the pranksters posted on YouTube. "I think it's probably best to provide these materials to both our committee and to the FBI, so we'll make arrangements between my staff and yours on how to facilitate that."

In 2018, the Daily Mail asked Schiff’s office about the call. A spokesman told the newspaper Schiff’s people contacted the FBI about the call, before it took place.

"We were aware that it was likely bogus and had already alerted appropriate law enforcement personnel, as well as after the call," the spokesperson told the paper.

Rumors that the Russians have compromising information on Trump goes back to the earliest reporting on Russian interference in the 2016 campaign. The Steele dossier, an independent investigator’s file first commissioned by Republicans and then by Democrats, included unsubstantiated accounts that the Russians could embarrass Trump if they wanted.

Rep. Devin Nunes: "In this committee’s last public hearing, Democrats recited a fictitious version of the call instead of reading the actual transcript. Democrats depicted the president saying, ‘I want you to make up dirt on my political opponent, understand? Lots of it, on this and on that.’ The transcript did not show President Trump saying anything remotely like that."

Schiff did present a dramatized version of the call between Trump and Zelensky during congressional testimony Sept. 26.

But that misses a key point: Schiff explicitly said that he was trying to describe "the essence" of Trump’s message, "shorn of its rambling character and in not so many words." Schiff never said he was reading the president’s remarks in full, nor did he pretend to. Here’s more on what Schiff got right and wrong in his retelling.

Rep. Devin Nunes: "The Democrats downplay, ignore or outright deny the many indications that Ukrainians actually did meddle in the election, a shocking about-face for people who for three years agreed that foreign election meddling was an intolerable crime that threatened the heart of our democracy."

Nunes’ comments exaggerate Ukraine’s involvement in 2016. They are similar to a Sept. 29 claim made by Trump lawyer Rudy Giuliani that Democrats "were colluding with the Ukrainians" in 2016. Nunes went on to talk about how a former Democratic National Committee staffer worked with Ukrainian officials to "dig up dirt on the Trump campaign," which she "passed on to the DNC and the Hillary Clinton campaign."

Some Ukrainians did want Clinton elected because they perceived her as more anti-Russia than Trump. Politico reported that government officials tried to boost Clinton’s chances of winning the election by publicly questioning Trump’s fitness for office and working with DNC contractor Alexandra Chalupa to dig up dirt about Trump and his advisers.

Did you hear something from the impeachment hearings that needs a fact-check? Email [email protected]