President Donald Trump with members of the president's coronavirus task force speaks during a news conference in the Brady Press Briefing Room of the White House on Feb. 26, 2020, in Washington. (AP)

During a Feb. 26 press conference on the coronavirus, President Donald Trump took an unexpected question.

"Have you seen evidence that the (Centers for Disease Control and Prevention) is trying to hurt you?" a reporter asked.

"No, I don’t think the CDC is at all, no. They’ve been working really well together. They really are, they’re professional," he said. "I think they’re beyond that. They want this to go away, they want to do it with as little disruption, and they don’t want to lose life."

The answer set him apart from some vocal radio and online supporters who say the CDC and others are exaggerating or fabricating the threat of the 2019 coronavirus. The virus has infected more than 81,000 people in 37 countries.

Some Facebook users have claimed that the coronavirus outbreak is a potential "false flag" operation run by Democrats and the media to hurt Trump’s re-election campaign. Others point to the fact that Dr. Nancy Messonnier, head of the CDC’s National Center for Immunization and Respiratory Diseases, is the sister of former Deputy Attorney General Rod Rosenstein as evidence of a conspiracy to hurt Trump. 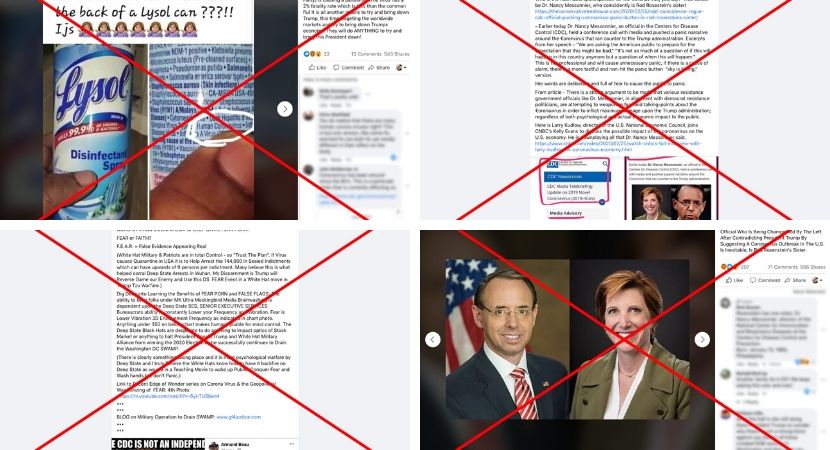 One factor driving the thinking could be the CDC’s difference in tone from the president. In a call with reporters Feb. 25, Messonnier said the coronavirus poses an imminent threat to the United States, where there are 60 confirmed cases.

"It’s not a question of if but rather a question of when, and how many people in this country will have severe illness," she said.

But there’s no evidence to support the assertion that the CDC is exaggerating or fabricating the threat of the coronavirus, officially known as COVID-19.

We reached out to the CDC for comment, but we haven’t heard back.

The source of one conspiracy theory is Rush Limbaugh, a conservative radio talk show host with a history of false statements.

In a Feb. 24 show, he said the coronavirus "is being weaponized as yet another element to bring down Donald Trump." Conservative blogs and Fox News host Laura Ingraham have amplified similar claims.

"I think the survival rate is 98%," Limbaugh said on his show. "It’s a respiratory system virus. It probably is a ChiCom laboratory experiment that is in the process of being weaponized. All superpower nations weaponize bioweapons."

We previously reported that assertions that the coronavirus is a Chinese "bioweapon" are unproven. 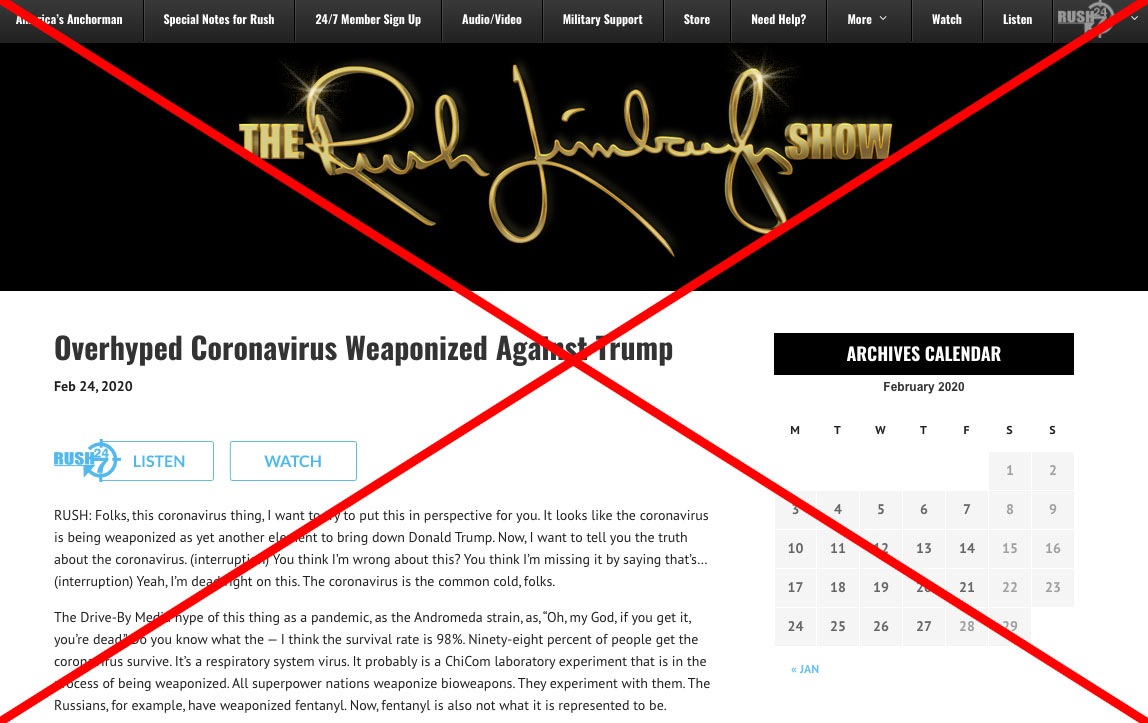 (Screenshot from the Rush Limbaugh Show)

On the same show, the radio host falsely claimed that the virus "is the common cold." And the next day, he said the media "thinks this is the new Russia, this is going to get Trump, they’re gleeful, they’re happy."

How would the coronavirus ruin Trump’s re-election chances? Limbaugh pointed to economic fallout.

Trump has enjoyed a growing stock market, and he’s campaigning for re-election on a strong economy.

But the coronavirus threatens that economic growth, and the president’s supporters see an underlying conspiracy coordinated by Democrats and the media. On Feb. 27, stocks continued to fall as investors feared a slowdown of business activity and corporate earnings amid a potential U.S. coronavirus outbreak and a slowdown in China.

The president himself has fed into the narrative. In a Feb. 26 tweet, Trump said MSNBC and CNN "are doing everything possible to make the Caronavirus (sic) look as bad as possible, including panicking markets, if possible."

We reached out to Limbaugh for comment, but we haven’t heard back.

Another popular conspiracy theory about the CDC’s response to the 2019 coronavirus traces back to the investigation of Russian meddling in the 2016 election.

An article published Feb. 26 on a conservative blog points out that Messonnier, the CDC official who has said the coronavirus poses a serious threat to the United States, is Rosenstein’s sister. Messonnier has been working in public health since 1995 and has served in a variety of leadership positions across the CDC.

"Rod Rosenstein as we all know definitely worked to undermine the Trump administration, which is oddly exactly what his sister is doing by undermining the more logical and calm message the president’s team has issued on the virus," the article reads.

During his press conference, Trump did appear to downplay the risk posed by the coronavirus in contrast to Messonnier the previous day.

Rosenstein served as deputy attorney general from April 2017 to May 2019. He appointed Robert Mueller as the special counsel to investigate potential ties between Trump’s 2016 campaign and Russia.

Mueller’s investigation did not find that the Trump campaign colluded with Russia to boost his chances of winning the White House. But Trump and his supporters have criticized the report as a hoax.

Coronavirus poses threat to US

The virus has spread rapidly since its outbreak in China in December, and there are 60 cases in the United States.

The World Health Organization has declared the coronavirus an international public health emergency. 2,762 people have died as a result of the virus, the vast majority in China. On Feb. 26, the CDC reported the first U.S. case of the coronavirus in a patient who had not traveled to or come in contact with someone from regions hit by the outbreak.

During his Feb. 24 show, Limbaugh said the 2019 coronavirus has a survival rate of 98%. That’s more or less accurate; a Chinese study of 44,672 confirmed cases of the virus found a fatality rate of 2.3%, mostly among older adults.

But a 2.3% fatality rate doesn’t mean the threat of the 2019 coronavirus is small or nonexistent.

That rate would be on par with the 1918 Spanish flu, which the WHO estimates killed between 2-3% of people who contracted it. The CDC says it was "the most severe pandemic in recent history," killing at least 50 million worldwide with about 675,000 in the United States.

There have been significant medical advancements since the Spanish flu outbreak, and there’s still much researchers don’t know about the clinical severity of the 2019 coronavirus. But to say that the CDC, the media or a political party have exaggerated or fabricated its threat isn’t supported by evidence.

PolitiFact, "No, the economy didn't suddenly get strong under Donald Trump," Feb. 6, 2020

The Wall Street Journal, "Dow Industrials On Pace For Correction as Virus Fears Show No Signs of Easing," Feb. 27, 2020