In this March 26, 2021, file photo, a member of the Philadelphia Fire Department prepares a dose of the Johnson & Johnson COVID-19 vaccine at a vaccination site setup at a Salvation Army location in Philadelphia. (AP)

If you’re not one of the 120 million Americans who have already received at least one dose of a coronavirus vaccine, you may be wondering: Is the shot worth it? And is it safe?

You’re not alone. A March poll found that 13% of Americans say they will "definitely not" get vaccinated, with Republicans and white evangelical Christians leading the pack. The most common reason given: The vaccines are too new and not enough is known about them.

The Food and Drug Administration has authorized three coronavirus vaccines for emergency use in the United States: one from Pfizer-BioNTech, one from Moderna and one from Janssen, a pharmaceutical company owned by Johnson & Johnson. All three were tested on tens of thousands of clinical trial participants and determined to be safe and effective at preventing severe COVID-19 cases. Still, concerns linger over how the vaccines were created and what side effects they could cause.

So PolitiFact took a look at the science to answer some common questions — and fact-check some common misconceptions — about the coronavirus vaccines. Have a question we didn’t answer below? Send it to [email protected].

I’ve heard the side effects are terrible. Are they that bad?

There are several potential side effects associated with all three vaccines approved for emergency use in the U.S. None are worse than COVID-19 itself.

Pain, redness and swelling are possible at the injection site. Fatigue, muscle pain, fever, chills, headache and nausea are also possible side effects. The Centers for Disease Control and Prevention says these effects usually start within a day or two of receiving the vaccine and should go away in a few days — similar to the flu vaccine.

What about Bell’s Palsy and blood clotting?

Some participants in coronavirus vaccine clinical trials developed Bell’s Palsy, a form of temporary facial paralysis. However, there’s no evidence that the vaccine was to blame; in the Pfizer trial, for example, the FDA wrote that the incidents "do not represent a frequency above that expected in the general population."

The connection between one COVID-19 vaccine and blood clotting is murkier.

On April 13, federal officials called for a pause in the use of the Johnson & Johnson vaccines after six women developed a rare blood clotting disorder within three weeks of vaccination. The CDC and the FDA said in a joint statement that the reaction appeared to be "extremely rare" and that the pause was recommended "out of an abundance of caution." Nearly 7 million Americans have received the vaccine.

RELATED: I got the Johnson & Johnson vaccine. Am I going to be OK?

Federal officials including Dr. Anthony Fauci, the nation's top infectious disease expert, said people should be fine if they received the vaccine several weeks ago and have not experienced severe reactions. Those that got the shot more recently should watch for symptoms but know that the risk is very low.

Do vaccines contribute to infertility?

You may have seen that claim attributed to the "head of Pfizer research" online. That sounds like a credible source, but it’s not — the claim is wrong.

Tens of thousands of people participated in clinical trials for coronavirus vaccines developed by Pfizer-BioNTech, Moderna and Johnson & Johnson. Infertility is not listed as a side effect for any of them, and experts say there’s no evidence to suggest the vaccines could reduce your natural fertility.

I read that pregnant women should not get them.

The coronavirus vaccines approved for emergency use in the U.S. were not tested specifically for their effects on pregnant women. While more data is needed, scientists say the vaccines are likely safe based on how they work in the body.

According to the CDC, pregnant women are more at risk for a severe COVID-19 illness than non-pregnant people, meaning they have a greater need for protection from the virus. The CDC and several reproductive-health organizations say the vaccines should be offered to eligible pregnant and breastfeeding women. There is no evidence of an uptick in miscarriages due to the vaccines.

I read that there are thousands of deaths from the vaccine — it’s in a government database.

The Vaccine Adverse Events Reporting System is a federally run database that records health issues that occur after vaccinations. There are reports of deaths following COVID-19 vaccination, but that doesn’t mean the vaccine caused or contributed to those deaths.

The CDC and the FDA, which both maintain the VAERS database, say the reports may be "incomplete, inaccurate, coincidental, or unverifiable." The system allows almost anyone — from doctors and nurses to patients and parents — to report medical issues following a vaccine. Public health officials interpret VAERS data to detect potential vaccine side effects, but the reporting system alone does not establish cause and effect.

How can I trust something that is an experiment? Wasn’t it developed super fast?

The novel coronavirus emerged in December 2019 and the first vaccine was approved a year later. That may seem fast, but the science behind the coronavirus vaccines is years in the making.

The Pfizer and Moderna vaccines, for example, stem from research that began in the early 1990s. Scientists learned from previous clinical trials, as well as work on Severe Acute Respiratory Illness (SARS), to perfect the technology behind the vaccines.

COVID-19 vaccination is not an experiment — all three vaccines approved in the U.S. have been shown to be safe and effective. The FDA approved them for emergency use due to the scale of the public health emergency.

I saw a video of someone shaking after they got the vaccine. Could that happen to me?

We’ve seen these kinds of videos circulate on social media since January. The clips are striking, but the side effect is unproven.

Shaking is not listed as a common side effect for any of the three vaccines approved for emergency use. Hives, swelling and wheezing are symptoms of a potential allergic reaction. Some scientists hypothesize that shaking after vaccination could be a result of functional neurological disorder, a condition triggered by stressful events such as medical procedures.

I’m opposed to abortion and read that the cells of an aborted fetus were used to develop the vaccines. 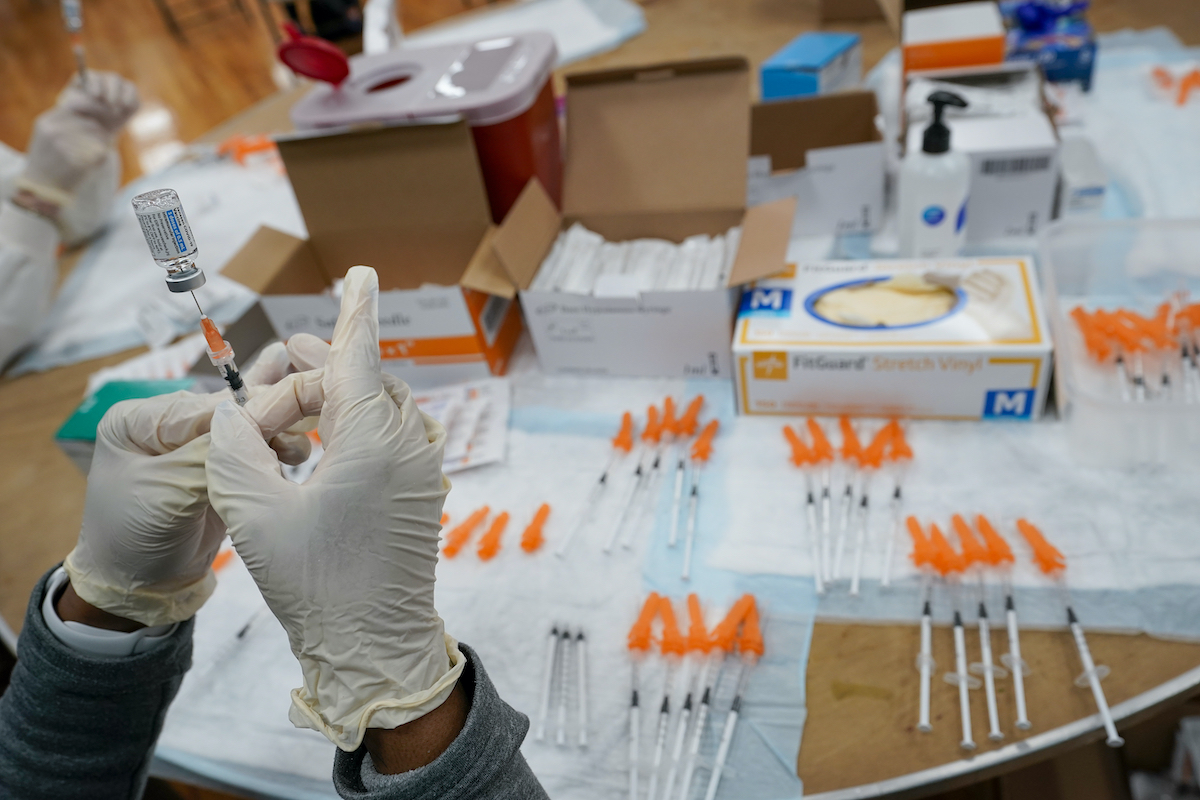 A Northwell Health registered nurses fills a syringe with the Johnson & Johnson COVID-19 vaccine at a pop up vaccinations site the Albanian Islamic Cultural Center on April 8, 2021, in the Staten Island borough of New York. (AP)

The vaccine uses a modified cold virus called an adenovirus, which trains the body’s immune system to recognize the coronavirus. These adenoviruses are grown in a cell line that was derived from an 18-week-old fetus aborted in 1985. Scientists cloned a cell from the fetus to create the cell line and grow adenoviruses. The cells themselves are essentially removed to manufacture the Johnson & Johnson vaccine.

Pope Francis said in late January that "everyone must take (a) vaccine" because "it is the moral choice." A commission appointed by the Vatican said all vaccines can be taken with a "clear conscience."

I’m young and healthy, so I don’t need the vaccine because I am not in a vulnerable group.

While they’re still at risk of developing a severe COVID-19 infection, children and young adults have fared better than adults over the past year. So why get vaccinated? It has to do with how vaccines work.

Public health officials say vaccines don’t only protect individuals from getting sick — they also help slow the spread of the coronavirus. For example, young and healthy people who aren’t vaccinated against COVID-19 could spread the virus to people who are more at risk of dying from the disease. Once enough people are vaccinated, the virus won’t be as easily transmissible, at which point the coronavirus could become less of a threat.

I had the virus already — don’t antibodies protect me?

Scientists are still studying COVID-19 antibodies, but they agree that people who recover from the virus do appear to develop some natural immunity to it. The big question is how long that immunity lasts — and how it compares to the vaccines.

Patients who survived severe coronavirus infections generally have higher antibody counts than those who had mild cases, meaning they’re more protected against the virus in the future. There’s no standard time frame for immunity, but the most conservative estimate is about four months.

The CDC recommends people who have already had COVID-19 still get vaccinated. That’s because the vaccine could create a bigger immune response, which better prepares the body to fight off the coronavirus in the future. Plus, the threat of a severe COVID-19 infection outweighs any benefits of natural immunity.

We follow the facts and share what we learn so you can make your own decisions. Support our mission today.

The American College of Obstetricians and Gynecologists, "Vaccinating Pregnant and Lactating Patients Against COVID-19"

Centers for Disease Control and Prevention, COVID-19 Vaccinations in the United States

Centers for Disease Control and Prevention, "Information about COVID-19 Vaccines for People who Are Pregnant or Breastfeeding"

Centers for Disease Control and Prevention, "Information about COVID-19 Vaccines for People with Allergies"

Centers for Disease Control and Prevention, "Why Are Childhood Vaccines So Important?"

PolitiFact, "Ask PolitiFact: How can COVID vaccines be safe when they were developed so fast?" March 29, 2021

PolitiFact, "No, COVID-19 vaccines do not contain nanoparticles that will allow you to be tracked via 5G networks," March 12, 2021

PolitiFact, "The facts on what the Catholic Church has said about the Johnson & Johnson vaccine," March 9, 2021

PolitiFact, "Tiffany misses mark with claim that young adults are not susceptible to coronavirus," April 8, 2021

PolitiFact, "Why you shouldn’t worry about getting Bell’s Palsy from the Pfizer COVID-19 vaccine," Dec. 11, 2020

ScienceAlert, "Terrifying Viral Videos of Shaking After COVID-19 Vaccines Are Not What They Seem," April 12, 2021

Stat News, "Shattering the infertility myth: What we know about Covid-19 vaccines and pregnancy," March 25, 2021

UChicago Medicine, "COVID-19 vaccines and pregnancy: What you need to know if you're pregnant, trying to get pregnant, or breastfeeding," March 10, 2021