The U.S. Capitol Building in Washington, D.C., was breached by thousands of protesters during a rally in support of President Donald Trump on Jan. 6, 2021. (Star Max via AP)

Facebook and Instagram posts are spreading false claims that President Donald Trump is set to impose martial law ahead of Joe Biden’s inauguration. Many of them allude to QAnon, a baseless conspiracy theory that’s banned on the platforms.

On Jan. 6, Trump fans stormed the U.S. Capitol as Congress counted electoral votes from the 2020 election. Among the rioters were supporters of QAnon, which claims Trump is secretly working with the military to fight an underground ring of cannibalistic, Satan-worshiping pedophiles.

The insurrection was openly planned on both mainstream and niche social media platforms for weeks. But in a Jan. 11 interview with Reuters, Facebook Chief Operating Officer Sheryl Sandberg deferred blame to other social networks.

"We again took down QAnon, Proud Boys, Stop the Steal, anything that was talking about possible violence last week," Sandberg said. "Our enforcement is never perfect, so I’m sure there were still things on Facebook. I think these events were largely organized on platforms that don’t have our abilities to stop hate, don’t have our standards and don’t have our transparency."

Facebook, which owns Instagram, has banned QAnon pages, groups and accounts since October, saying the conspiracy theory violates its policies against dangerous individuals and organizations. After the Capitol riot, Facebook also banned Trump’s account and content related to "stop the steal," a movement that falsely claims voter fraud affected the 2020 election outcome.

Over the past few weeks, QAnon slogans like "the great awakening" and "WWG1WGA" (short for the QAnon slogan, "where we go one, we go all") have been shared in scores of posts on Facebook and Instagram, according to CrowdTangle, a social media insights tool. Many of the posts make baseless claims about Trump imposing martial law or invoking the Insurrection Act, a federal law that empowers the president to deploy the military to suppress civil disorder, insurrection or rebellion. 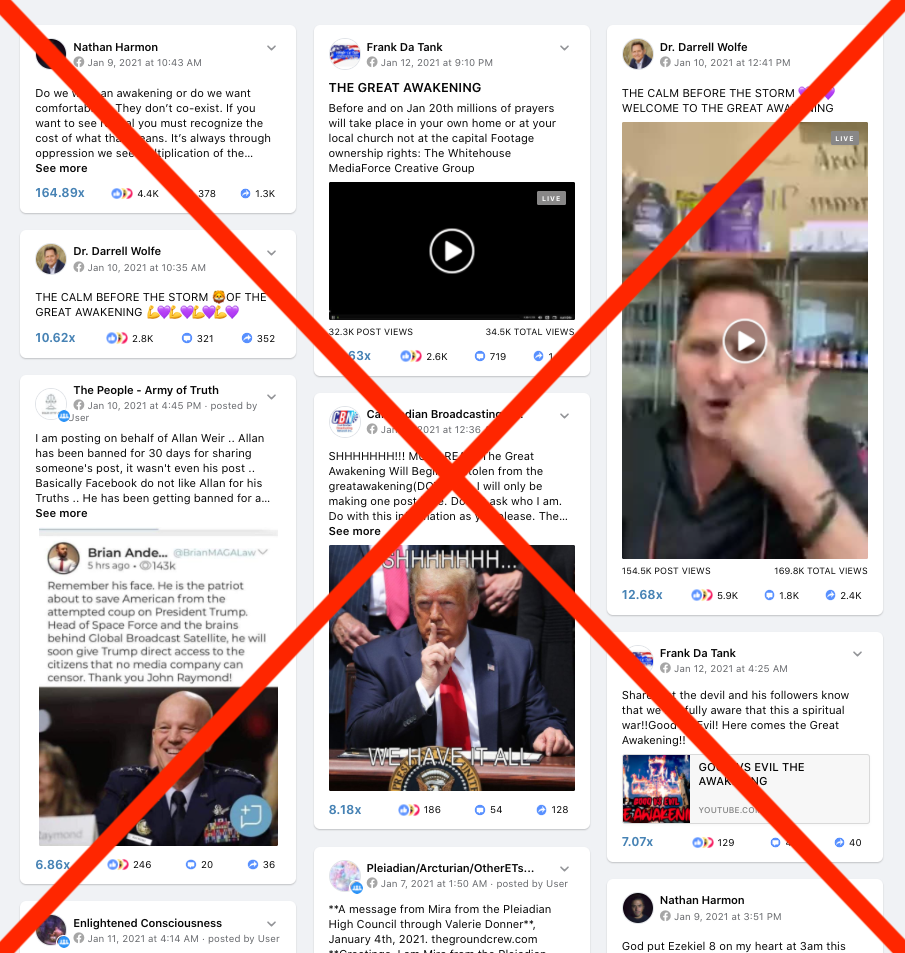 The overarching narrative: Trump is working to prevent Biden from assuming the presidency.

One popular video published Jan. 11 plays a series of clips from Trump speeches and rallies between transitions like "the deep state’s time is over" and "panic in DC" as soaring music plays in the background. The caption promises that "NOTHING Can Stop What is Coming!!!"

"Jan. 20 will be remembered as the day that the people became the rulers of this nation again," Trump says in the video, which pulls footage from the president’s inaugural speech in 2017.

"Now we are calling for a great reawakening," Trump says later in a snippet from his first speech to the United Nations in 2017.

The video ends with a satellite image of the United States showing all the states turning red. Then the date of Inauguration Day — Jan. 20, 2021 — flashes across the screen alongside "WWG1WGA."

The post, one of several we found on Facebook, was flagged as part of the company’s efforts to combat false news and misinformation on its News Feed. (Read more about our partnership with Facebook.) We reached out to Facebook for comment, but we haven’t heard back.

First Draft, a nonprofit organization that tracks online misinformation, told PolitiFact that the post appears to have originated on Parler before Amazon took the social network  offline for hosting "violent content."

The Facebook video doesn’t specify what will happen on Jan. 20, but the tenets of QAnon — as well as activity on other internet platforms — offer some clues.

According to the conspiracy theory, Trump’s campaign will culminate in something called "the storm." The event, which takes its name from some ambiguous comments that Trump made to reporters in October 2017, is a kind of judgment day when the president will unmask the cabal and punish his enemies.

RELATED: What is QAnon, the baseless conspiracy spilling into US politics?

Q, the anonymous internet persona behind QAnon, has predicted that the storm would happen on several different days, none of which have panned out. In a video posted after the riot at the Capitol, Trump said "a new administration will be inaugurated on Jan. 20."

But researchers who study QAnon say its supporters still think something will prevent Biden from taking office.

"A common claim is that the U.S. military will take over the country rather than allow Biden to become president," said Travis View, co-host of the QAnon Anonymous podcast. "Typical of QAnon theories, the details of what they believe will happen is fuzzy. But they remain convinced that something dramatic will happen that will ensure Trump stays in office."

Some social media users have published more specific claims about unrest leading up to Inauguration Day.

A post published Jan. 13, one of several we found on Facebook, says "military operations will be taking place in many of the major corrupt cities" at the behest of Trump, who will select former national security adviser Michael Flynn as his new vice president.

"Military takedowns and arrests begin this wknd and will continue forward for the next 13 days/nights," the post says. "Everyone will be getting emergency alerts on their phones, tv's, radios & internet. It will override all other broadcasts and could last for several hours at a time."

There is no evidence to back up that claim, which has also spread via forwarded text messages. 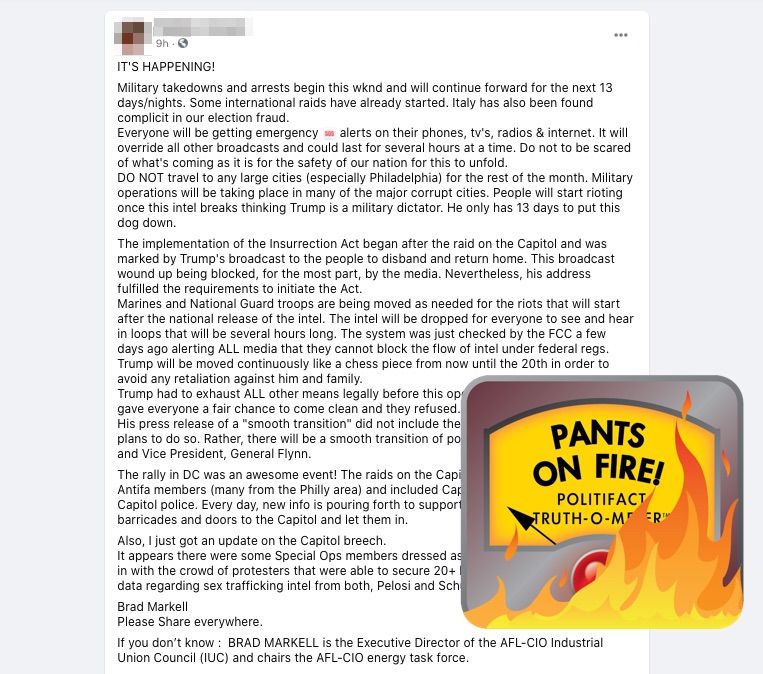 The post claims that Italy meddled in the 2020 presidential election (it didn’t), Trump has already invoked the Insurrection Act (he hasn’t), and anti-fascist activists known as antifa led the assault on the Capitol (they didn’t). NBC News reported that the "military takedown" rumor was first promoted by accounts linked to QAnon, which has claimed Trump would alert the country with a message about mass arrests and executions of Democrats.

QAnon doesn’t have as large a following on Facebook as it did prior to the company’s ban, and the conspiracy theory’s supporters have since flocked to alternative platforms. But the drip, drip of misinformation is still happening going into Inauguration Day.

"These sorts of narratives are clearly concerning," View said. "As it becomes clear that there is no secret plan for preventing Biden from taking office, some more militant members of the QAnon community may take matters into their own hands."

The New York Times reported that, since Jan. 6, Trump fans, militia groups and QAnon supporters have been planning armed protests at state capitols and in Washington. An FBI bulletin obtained by ABC News says such demonstrations are being planned in all 50 states, and thousands of National Guard troops have been deployed to the District of Columbia as officials brace for potentially violent protests.

"We have now long passed the point of simply asking: how can people believe in QAnon when so many of its claims fly in the face of facts?" wrote Marc-André Argentino, a Ph.D. candidate at Concordia University who studies QAnon, in a Jan. 7 Quartz article. "The attack on the Capitol showed the real dangers of QAnon adherents."

BuzzFeed News, "The Rioters Who Took Over The Capitol Have Been Planning Online In The Open For Weeks," Jan. 6, 2021

Email from Travis View, a QAnon researcher and co-host of the QAnon Anonymous podcast, Jan. 13, 2021

Facebook, "An Update to How We Address Movements and Organizations Tied to Violence," Aug. 19, 2020

Quartz, "QAnon and the storm of the US Capitol: The offline effect of online conspiracy theories," Jan. 7, 2021

The Washington Post, "QAnon reshaped Trump’s party and radicalized believers. The Capitol siege may just be the start." Jan. 13, 2021