The TikTok application icon is seen on an Apple iPhone X screen close-up in May 2019. (Shutterstock)

Russia’s invasion of Ukraine has fueled a surge of false and misleading content on TikTok. Countless videos are exploiting the platform’s defining features around audio creation and sharing in order to spread fake wartime footage purportedly filmed in Ukraine.

This flood of misinformation features much of the same types of deceptive postings that have plagued older social networking sites for years, including waves of old, out-of-context photos and videos falsely claiming to represent scenes from Ukraine.

These have spread even as the community guidelines on TikTok, which has more than 1 billion users, say that the platform does "not permit misinformation that causes harm to individuals, our community, or the larger public regardless of intent."

One video purported to show Russian soldiers parachuting into Ukraine but was actually several years old. Another clip claimed to show Russian and Ukrainian troops "face to face," but it dated back to 2014. And an ultra-viral video, which supposedly depicted Ukrainian soldiers saying goodbye to sobbing loved ones, was cut from a 2017 documentary film.

But TikTok has also played host to newer forms of misinformation not as common elsewhere, courtesy of a unique feature that helped fuel its rise in popularity: its audio functionality, which lets creators take the music or sounds off of other videos and pair them with their own visuals.

"Sounds and audio on Tik Tok is a big part of how misleading content is shared and can survive on the platform," said Ciaran O’Connor, who has written about TikTok sounds as an analyst at the Institute for Strategic Dialogue, a nonprofit focused on tracking online extremism. 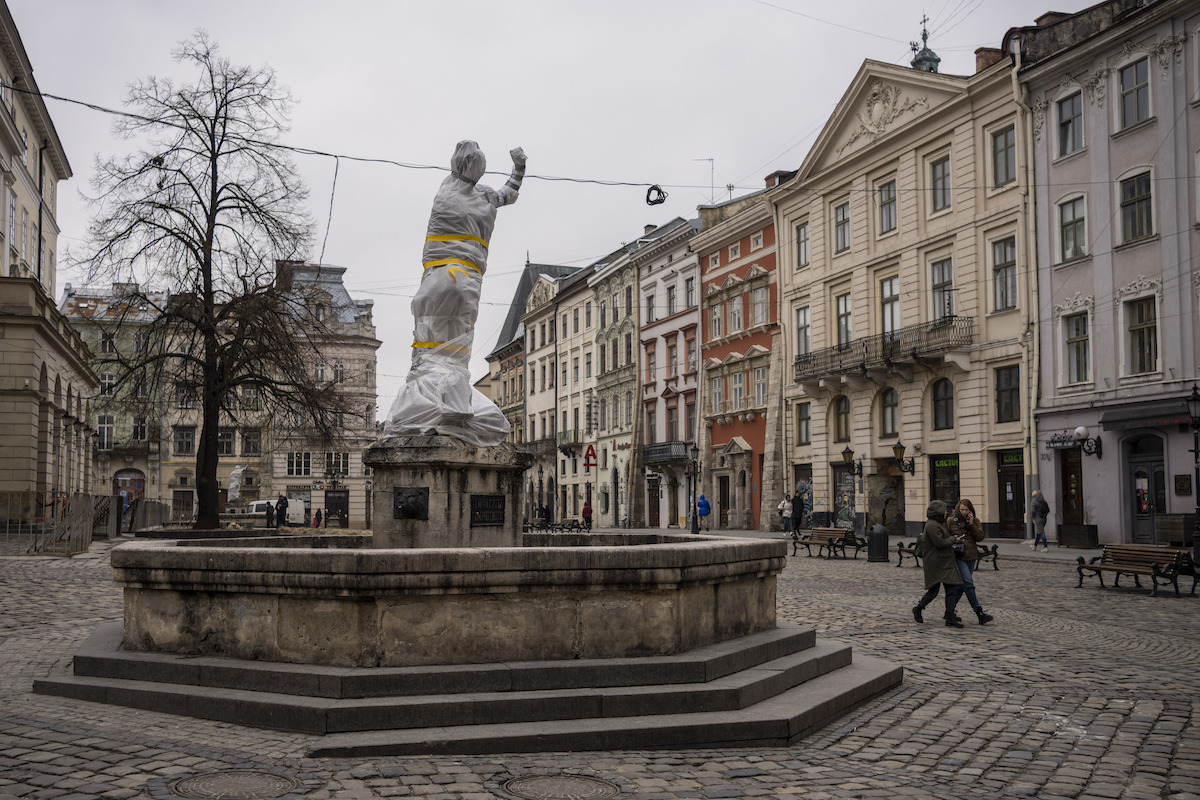 TikTok’s audio feature is the driving force behind the lip syncing and dancing videos that typically inspire viral trends on the platform. But in the fog of war, misinformers are taking advantage of the design, layering old or out-of-context audio on top of unrelated videos to create false footage purportedly captured amidst the chaos in Ukraine.

"Reuse of audio tracks is part of TikTok culture, and is part of what makes TikTok so enjoyable," said Mike Caulfield, a research scientist and affiliate instructor at the University of Washington’s Center for an Informed Public. "But what's great for expression isn't always a great fit for news."

The ability to repurpose audio is central to TikTok’s user experience.

The platform makes it easy to copy the audio behind other videos for reuse, allowing creators to pull from its library of original sounds, including snippets from music, TV shows and other TikTok videos. But the ease of use has also allowed users to dub audio of sirens, gunshots and other wartime sounds over videos that falsely claim to show the conflict in Ukraine.

"It's very much the backbone of the app," said Abbie Richards, a misinformation researcher focused on TikTok. "So it makes creating that kind of misleading content super easy."

One video that Richards found and wrote about in a piece published by the liberal watchdog group Media Matters for America saw a TikTok user upload audio from outside of the app and edit it onto an unrelated clip filmed with a camera — all to create the false impression that viewers were witnessing on-the-ground footage of a massive explosion in Ukraine. The video racked up millions of views and has since been deleted.

The footage in the video was shaky, Richards said. It showed someone filming as they ran from their balcony, while voices in the background could be heard repeatedly exclaiming, "Oh my god." Then the explosion sounded, and a man in the background yelled, "Ow, my leg!"

The spoken English was one sign that the video wasn’t filmed in Ukraine. The fact that viewers could not see the people speaking or the explosion that boomed was another, Richards said.

"It's just chaos," she told PolitiFact. "And really adding to the chaos is the sound. Otherwise, it would just look like somebody randomly running away from a balcony."

Searching Google, Richards found that the TikTok video had actually ripped the audio track from a 2020 YouTube video, which claimed to show the explosion that year in Beirut, Lebanon.

But editing in out-of-context audio is not the only way misinformers have used TikTok’s sounds feature to deceive. Many other users have poached soundtracks from existing TikTok videos, layering them over new visuals that have nothing to do with the context in which the audio was originally captured or presented.

On Twitter, Richards highlighted one example of this phenomenon. Over 13,000 videos were reusing the same sound of guns ringing out, which came from a 2021 video, and many of the top-performing videos that had stolen the sound were claiming to show footage of Ukraine.

The sound as it appeared on the 2021 video is no longer available on TikTok. But PolitiFact found a strikingly similar audio track featured on nearly 600 videos, including many that claimed in prominent text boxes to show the situation in Ukraine "live."

This PolitiFact video shows several of the hundreds of TikTok videos that all used the same gunfire sound.

Among the most-watched of those roughly 600 TikTok videos was a video that dubbed the gunfire audio over a clip of a plane taking off. The video received more than 2.7 million views and came from an account that has other Ukraine-related misinformation.

The plane in the video was actually one of the Blue Angels, the U.S. Navy’s flight demonstration squadron, and the video was years old. The same footage is in a 2017 post on YouTube.

This PolitiFact video shows how a TikTok video, created using the same gunfire sound featured in hundreds of other videos, falsely frame years-old footage of a U.S. Navy plane as footage from Ukraine.

TikTok’s live-streaming space, which gives users the ability to give monetary tips to video creators, has also become a breeding ground for false Ukraine footage. Various live streams claiming to show Ukraine are actually just videos streamed from the vantage point of a window, a balcony’s edge, or a rooftop, while an audio loop blasts the sounds of sirens.

"There’s this kind of scene, and a couple are looking on apartment blocks or buildings that are fairly nondescript," O’Connor said. "It could be Ukraine. It could also be maybe Ireland or somewhere like that in the middle of a city. And there's a siren sound that's playing on the app."

One such stream that PolitiFact viewed showed what appeared to be looped footage of a person’s boot twitching in front of a blown-out wall, all while the sound of a siren blared in the background. It was not clear where the video came from, but the stream got over 66,000 views.

How to avoid being duped

Asked about the misinformation exploiting TikTok’s audio functionality, a spokesperson for the company said it continues to work with fact-checking organizations that it has partnered with, including PolitiFact. (Read more about PolitiFact’s partnership with TikTok.)

"We continue to respond to the war in Ukraine with increased safety and security resources to detect emerging threats and remove harmful misinformation and other violations of our community guidelines," the spokesperson said in a statement.

TikTok has also rolled out a "digital literacy hub" on the app, the spokesperson said. The company already makes certain categories of content ineligible for recommendation on "For You" feeds, where users can scroll from one algorithmically recommended video to the next.

The platform’s design can make it challenging for users to be critical of what they’re consuming in the ways media literacy experts recommend.

"The content is often consumed in quick succession, and our critical faculties do better with a bit of a pause," said Caulfield, the University of Washington research scientist, who developed a four-step method for separating fact from fiction online.

Some of those steps can be difficult to take on TikTok, where users are often recommended videos from sources they don’t know, or who may be uploading content in a language other than English. And there’s another built-in obstacle: Experts believe the platform’s algorithm weighs watchtime, so the more time a person spends re-watching a video to determine if it’s true, the more that person is signaling an interest in seeing similar content.

Some users flagged videos and live streams that dub reused audio onto footage that they claim shows Ukraine, leaving comments that call out the video’s deception.

Experts recommend looking for comments like that and, overall, thinking before sharing.

"My best advice at the moment, at a bare minimum, is to definitely check and make sure that the audio matches the video, like that it is from the same source. The other is just to be skeptical of what you’re seeing in the first place," Richards said. "Especially in a moment where there is this information vacuum, we just see so much inauthentic content being created and distributed."

NPR, "TikTok sees a surge of misleading videos that claim to show the invasion of Ukraine," Feb. 28, 2022

Media Matters for America, "TikTok is facilitating the spread of misinformation surrounding the Russian invasion of Ukraine," Feb. 25, 2022

Statement from a TikTok spokesperson, March 3, 2022

Phone interview with Ciaran O’Connor, analyst at the Institute for Strategic Dialogue, March 2, 2022

Email interview with Mike Caulfield, research scientist and affiliate instructor at the University of Washington’s Center for an Informed Public, March 1, 2022