Bernie Sanders
stated on May 4, 2016 in a tweet:
"Increasing the min. wage to $15 an hour would reduce spending on food stamps, public housing and other programs by over $7.6 billion a year."

Though he’s significantly trailing Hillary Clinton in the Democratic delegate count, Bernie Sanders is keeping up the pressure on his primary rival, particularly on policy grounds.

In a tweet sent on May 4, 2016 -- the day after Sanders won the Indiana primary -- Sanders reminded followers about his stance on the minimum wage, which is more aggressive than Clinton’s. Sanders supports raising the wage to $15 an hour, while Clinton has backed a raise to $12 an hour. (Currently, it’s $7.25 an hour.)

"Increasing the min. wage to $15 an hour would reduce spending on food stamps, public housing and other programs by over $7.6 billion a year," Sanders tweeted.

Is that correct? Not really. 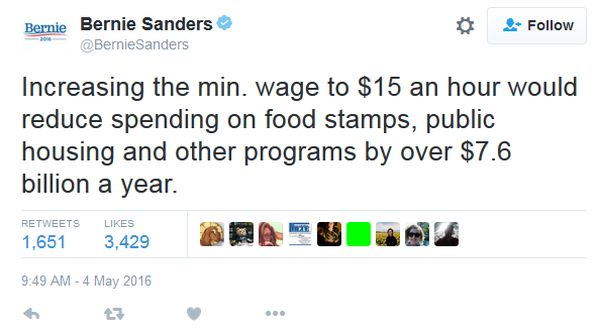 The source of Sanders’ statistic

The number comes from the Economic Policy Institute, a left-of-center think tank, based on a minimum wage hike to $10.10. "Raising the minimum wage to $10.10 would reduce government expenditures on current income-support programs by $7.6 billion per year -- and possibly more, given the conservative nature of this estimate," EPI wrote.

The author of the EPI paper, David Cooper, told PolitiFact that he and his colleagues did subsequently re-run the numbers -- not for a $15 minimum wage but for a $12 minimum wage. Their conclusion was that a bump to $12 would save an even higher amount than a bump to $10.10 -- specifically, $17 billion annually. So Sanders’ tweet, Cooper said, could actually be "an understatement."

But even if you agree with that argument -- and many economists would not -- changing the calculation to a $15 minimum wage could make a big difference.

Even Cooper acknowledged that there’s a degree of uncertainty about the impacts of a minimum wage hike as large as the one Sanders was referring to, if only because it hasn’t been studied.

"I don't think we know definitively whether $15 would be different, because it is larger than the increases that have been rigorously studied," Cooper said. However, he added, "If you think $15 would have some sizable negative effect on employment or hours, it's going to moderate those savings (on government assistance programs). We have no way to know by how much."

Other economists we checked with expressed even deeper skepticism. They said that even if you accept research that says modest minimum-wage increases don’t depress employment -- which, again, is a claim not all economists agree with -- it’s unwise to blithely assume that an increase to $15 will have no negative impact on hiring and hours worked.

Scaling that calculation up to a $15 minimum wage would almost certainly increase net job losses further, said Gary Burtless, an economist with the Brookings Institution.

"It’s very hard to believe that a minimum wage hike to $15 would produce the same adverse impact on employment as a hike to just $10.10," Burtless said. Indeed, the potential adverse impacts are "likely to be considerably bigger" at $15, he said.

Others agreed. "A larger hike is more likely to cause a decrease in employment opportunities, and that could result in an increase in the demands for government support rather than a decrease," said Tara Sinclair, an economist at George Washington University and the jobs site Indeed.

"These estimates are predicated on the notion that the minimum wage is a simple transfer from employers to employees, with no negative effects on employment," he said. "The higher the minimum wage goes, the worse of an assumption that is."

What the Sanders camp says

When we reached out to the Sanders campaign, they forwarded two supporting documents.

The second was a study from the University of Washington that found little or no evidence of price increases at grocery, retail, or gasoline stores in Seattle relative to the surrounding areas after that city raised its minimum wage.

However, while Seattle’s wage is eventually heading to $15, it has not reached that level yet, and the study only looked at the period after the wage increased from $9.47 to $11. That’s a jump of $1.53, not $7.75 -- the size of the federal increase if Sanders had his way.

The authors of the University of Washington paper acknowledge this. "We have little reason to think that our initial impact assessment will adequately capture the full impact of the minimum wage ordinance," they wrote. "As some employers will have until 2021 to fully adapt to higher wages, the complete impact of the $15 minimum wage in Seattle may not be known for nearly a decade."

One of the authors, University of Washington public policy professor Jacob L. Vigdor, told PolitiFact that "it's fair to say that we don't have evidence to support the public spending claim" made by Sanders.

Sanders tweeted, "Increasing the min. wage to $15 an hour would reduce spending on food stamps, public housing and other programs by over $7.6 billion a year."

Sanders based this on a study that looked at what would happen if the minimum wage were raised to $10.10, not to $15. In reality, no such study of a $15 wage hike exists -- and economists say there’s good reason to believe that jobs lost from a wage hike that large could be significant. It might even be big enough to increase the cost of government assistance, not lower it.

At the very least, a minimum wage increase this big is historically unprecedented, meaning that the degree of certainty in Sanders’ tweet is unsupported by academic evidence. We rate the claim Mostly False.

Congressional Budget Office, "The Effects of a Minimum-Wage Increase on Employment and Family Income," February 2014

Email interview with Tara Sinclair, economist with George Washington University and Indeed, May 4, 2016

Email interview with Gary Burtless, senior fellow at the Brookings Institution, May 4, 2016

Email interview with Jeffrey Clemens, professor of economics at the University of California-San Diego, May 4, 2016

Email interview with David Neumark, professor of economics at the University of California-Irvine, May 4, 2016

Email interview with David Cooper, economic analyst with the Economic Policy Institute, May 4, 2016

Email interview with Warren Gunnels, spokesman for Bernie Sanders, May 4, 2016