Bloggers
stated on April 5, 2020 in a fake news article:
Says the NBA is asking Donald Trump to “resign or we’ll never play again.”

The Golden 1 Center center empties out after the NBA basketball game between the New Orleans Pelicans and Sacramento Kings was postponed at the last minute in Sacramento, Calif., on March 11, 2020. (AP)

A fake news story shared on Facebook claims the NBA is considering canceling its season not because of the coronavirus, but because President Donald Trump is still in office.

The article, published on a website called "NewYork One News" on April 5, says players "held a secret vote" prior to the start of the season to suspend games until Trump is removed or voted out of office. As evidence, it cites anonymous sources.

"Since much of the league is made up of Hollywood actor and musician wannabes, these millionaire crybabies overwhelming voted to approve the measure," reads the story, which has been shared in pro-Trump and Fox News fan groups on Facebook. 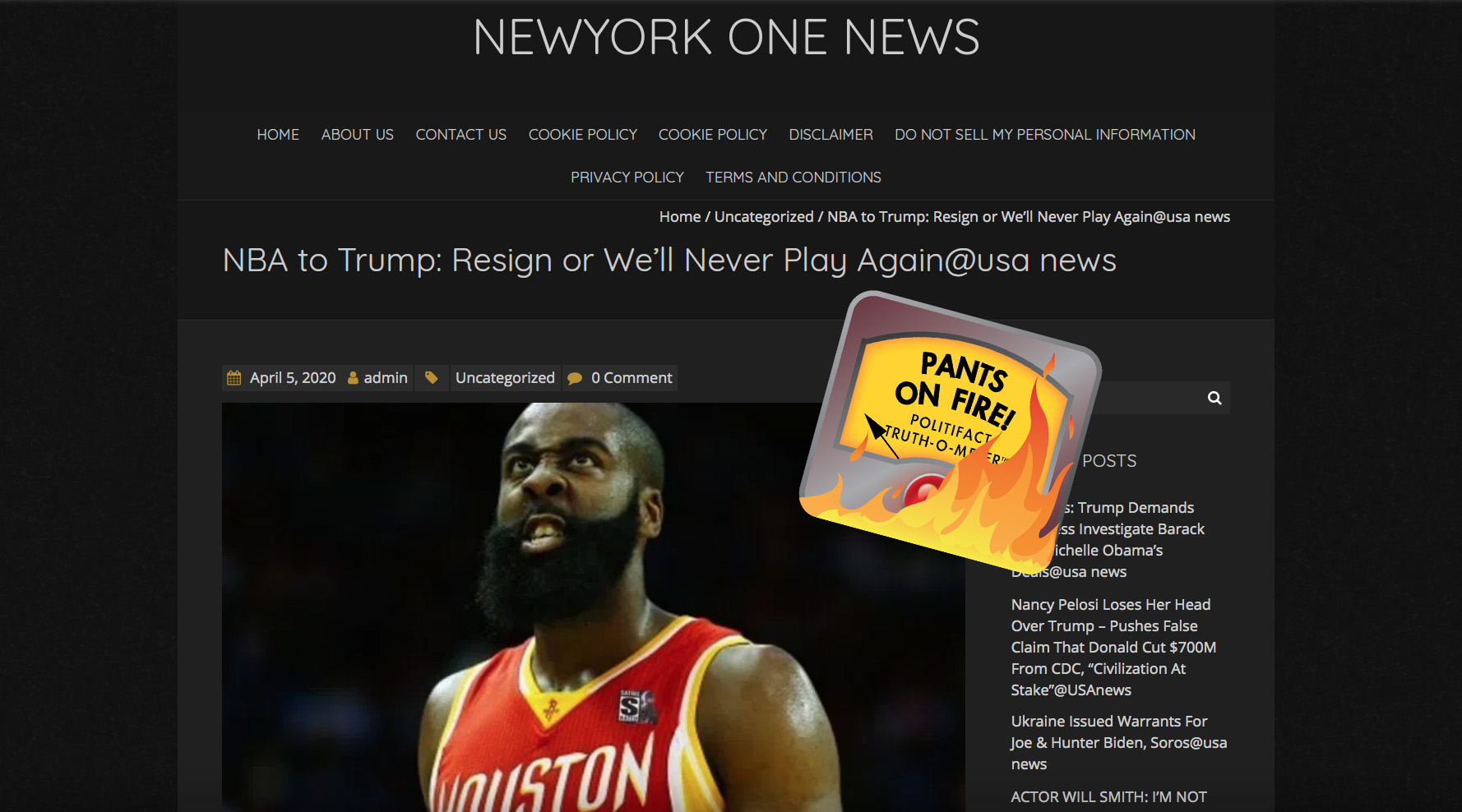 The NBA suspended its season in mid-March after a Utah Jazz player tested positive for the coronavirus. More recent reports suggest the league could cancel the rest of its season due to the pandemic.

But there is no evidence that NBA players voted to suspend games until Trump was removed from office. The fake news story was copied from a website that claims to be satirical.

The website, BustaTroll.org, says on its about page that it’s part of the "‘America’s Last Line of Defense’ network of parody, satire, and tomfoolery" and "everything on this website is fiction." The network is run by a man named Christopher Blair, a Maine man who has said his goal is to trick conservatives into sharing made-up content on Facebook.

Fake news websites often copy Blair’s stories to get clicks and generate digital advertising revenue. While Blair’s sites have disclaimers warning that the content is made-up, websites that copy his content typically do not. In January, we investigated how a network of more than 100 hoax sites republished Blair’s articles to become a popular source of misinformation on Facebook, where users shared the stories as if they were true.

Just like those sites, NewYork One News is bogus. Public domain records indicate the site was registered in mid-February and uses Google AdSense to monetize its articles.

PolitiFact, "How a disinformation network exploited satire to become a popular source of false news on Facebook," Jan. 23, 2020