NaturalNews.com
stated on February 3, 2020 in an article:
Says "the coronavirus was engineered by scientists in a lab."

Hospital staff wash the emergency entrance of Wuhan Medical Treatment Center, where some infected with a new virus are being treated, in Wuhan, China, on Jan. 22, 2020. (AP)

As the 2019 coronavirus continues to spread around the world, an anti-vaccine website has concocted a conspiracy theory about its source.

In a blog post published Feb. 3, Natural News, a website known to promote health misinformation, lays out an "irrefutable" conspiracy that the coronavirus is man-made.

"The tools for genetic insertion are still present as remnants in the genetic code. Since these unique gene sequences don’t occur by random chance, they’re proof that this virus was engineered by scientists in a lab," the story reads.

The article goes on to say that the World Health Organization and the Centers for Disease Control and Prevention are "covering up this inconvenient fact in order to protect communist China." Natural News does not provide evidence for the claim.

The story was flagged as part of Facebook’s efforts to combat false news and misinformation on its News Feed. (Read more about our partnership with Facebook.) It has been shared more than 2,700 times. 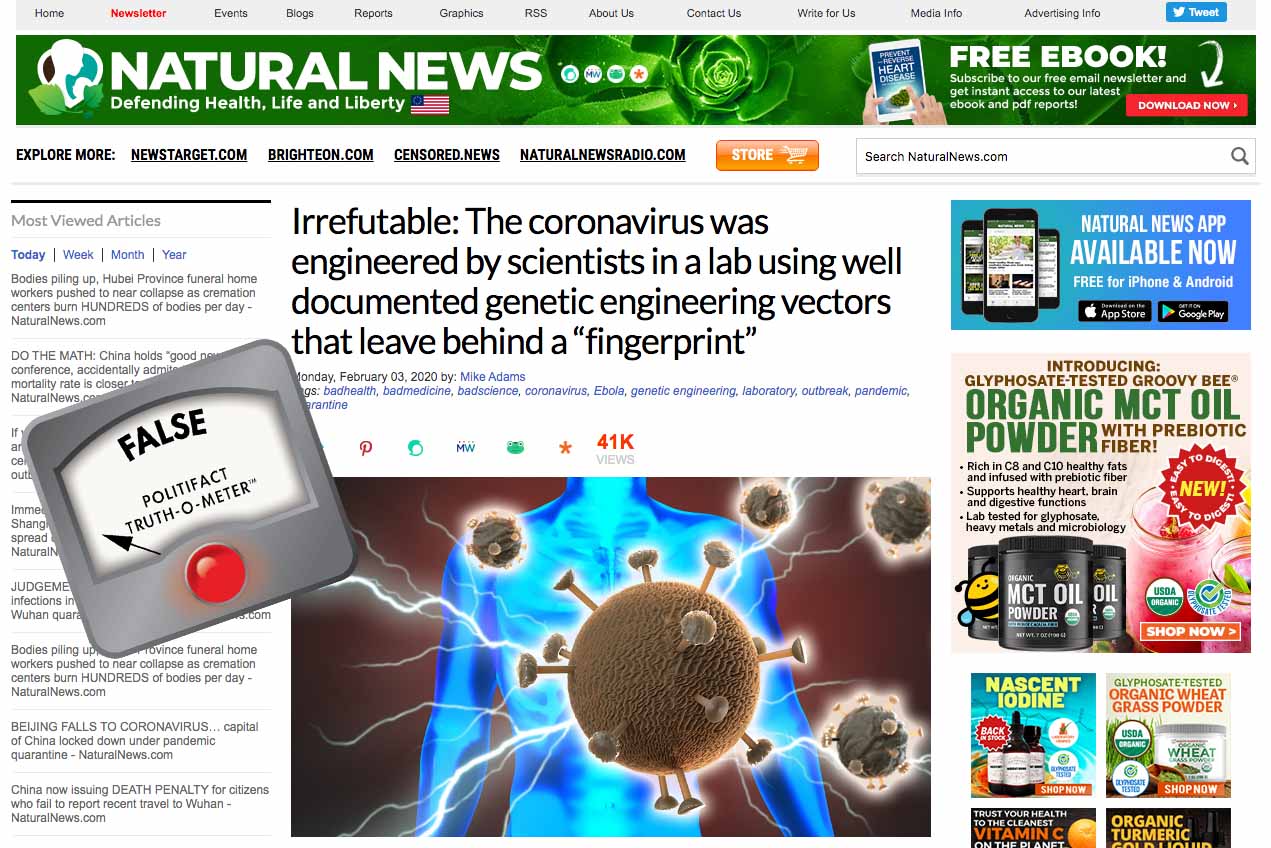 PolitiFact has fact-checked several hoaxes and conspiracies about the 2019 coronavirus, which has infected more than 37,000 people globally and killed 812 in China. The outbreak started in the central Chinese city of Wuhan in December and has since spread to 24 countries.

One of the most popular conspiracies about the coronavirus is that it was created in a lab, possibly as a bioweapon. We’ve previously said those claims are unproven — and the Natural News story has similar shortcomings.

Rush Limbaugh
stated on December 15, 2020 in a radio show segment
The American Medical Association rescinded a previous statement and now says "hydroxychloroquine is okay" for COVID-19.

The website says that "every virology lab in the world that has run a genomic analysis of the coronavirus now knows that the coronavirus was engineered by human scientists." But none of the researchers that has analyzed the virus has come to that conclusion.

According to the CDC, both the agency and Chinese authorities have isolated the genome of the 2019 coronavirus. Their findings suggest "a likely single, recent emergence of this virus from an animal reservoir."

We analyzed the eight publications the CDC lists on its landing page about coronavirus. None asserts that the virus was engineered by humans.

One study, which analyzed the genetic sequence of the coronavirus, was published Jan. 30 in the journal The Lancet. It says the 2019 coronavirus is a human betacoronavirus similar to Severe Acute Respiratory Syndrome (SARS) and likely comes from bats.

"Although our phylogenetic analysis suggests that bats might be the original host of this virus, an animal sold at the seafood market in Wuhan might represent an intermediate host facilitating the emergence of the virus in humans," the study reads.

Other blogs and social media users have speculated that a lab near Wuhan could be the source of the virus. The Wuhan National Biosafety Laboratory is a maximum-security biolab that deals with some of the world’s most dangerous pathogens, including Ebola and SARS. As of now, however, there is no evidence that the lab is the source of the outbreak.

The Natural News article is unsupported by evidence. We rate it False.

Natural News, "Irrefutable: The coronavirus was engineered by scientists in a lab using well documented genetic engineering vectors that leave behind a ‘fingerprint,’" Feb. 3, 2020

Donald Trump
stated on January 6, 2021 a speech on the Ellipse outside the White House:
"We won. We won in a landslide. This was a landslide.”

Facebook posts
stated on December 28, 2020 a video:
The Christmas Day explosion in Nashville, Tenn., was the result of a “missile strike.”

Facebook posts
stated on December 15, 2020 text posts and screenshots:
“One of the first nurses to receive the vaccine in AL is now dead.”

Bloggers
stated on December 6, 2020 an article on GreenMedInfo.com:
"The FDA knows that rushed-to-market COVID-19 vaccines may cause a wide range of life-threatening side effects, including death."