Facebook posts
stated on February 15, 2020 in an image:
High levels of sulfur dioxide in Wuhan “may be a sign of mass cremations of victims of the coronavirus."

A popular Facebook post is taking an image out of context to promote a hoax about the cremation of coronavirus victims.

The post, which was published Feb. 15, includes an image that claims to show a "spike in sulfur dioxide emissions just outside Wuhan." The image cites Instagram user @conspiracyplots, who published it the same day.

"Sulfur dioxide is a gas that is released when organic matter, such as human bodies, are burned," reads text underneath the image. "This alarmingly high level of the gas may be a sign of mass cremations of victims of the coronavirus." 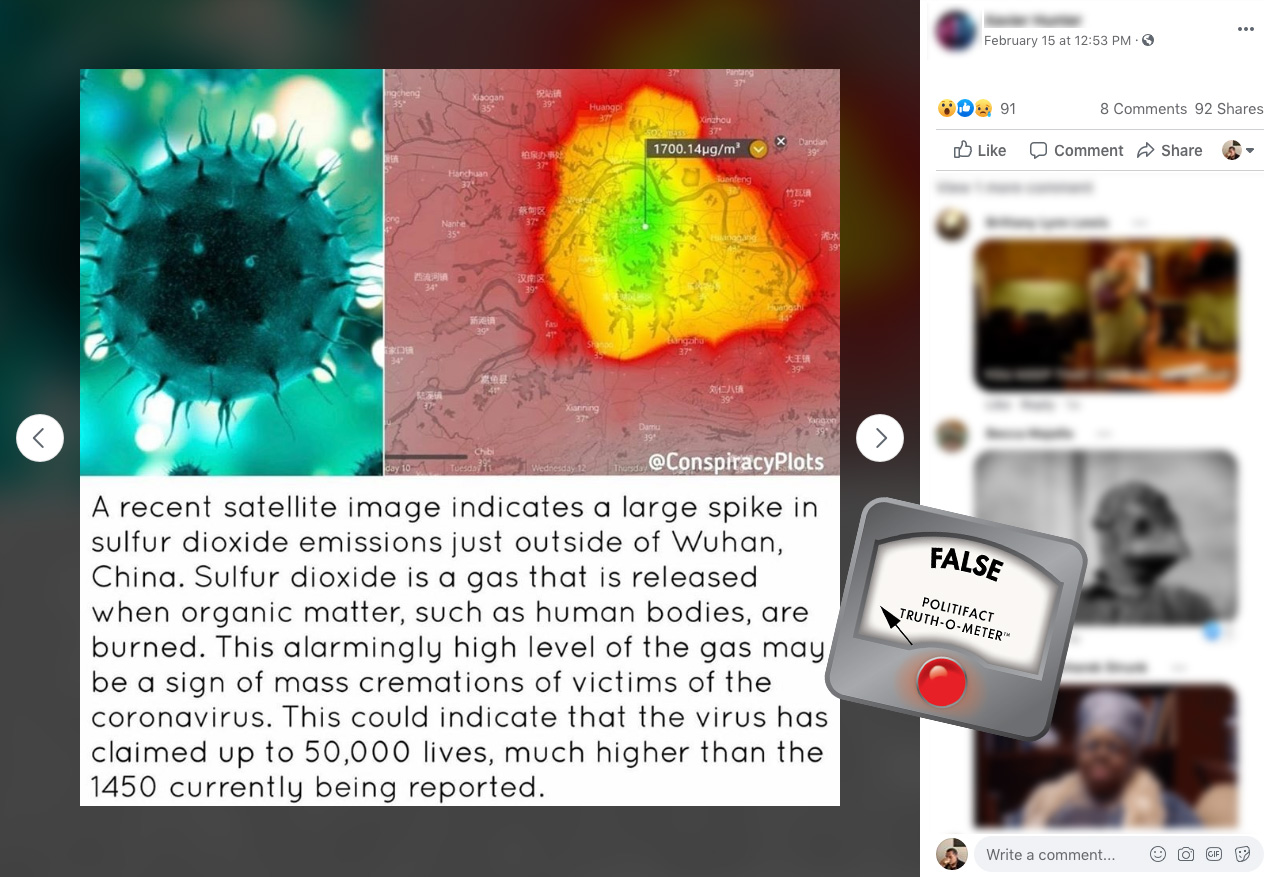 According to the World Health Organization, the 2019 coronavirus has infected more than 81,000 people in 37 countries. The vast majority of the 2,761 deaths have occurred in China.

The Chinese government has ordered for the swift cremation of patients who die after contracting the coronavirus. But the Facebook post does not show sulfur dioxide resulting from cremation.

Twitter user @inteldotwav first connected cremations in China with heightened levels of sulfur dioxide near Wuhan. In a Feb. 8 thread, the user posted a screenshot of a map from Windy.com, a website that tracks global wind and weather patterns. It has more than 12,200 retweets.

One of the possible reasons for the influx of sulfur dioxide, @inteldotwav said, is that "dead bodies are being burned on the outskirts of the city." Several tabloids uncritically reported the false claim and later retracted their stories after fact-checkers debunked them.

RELATED: Hoaxes about the coronavirus are now trying to prove human extermination

There are a few things wrong with the sulfur dioxide conspiracy theory.

Third, while the gas can be produced by burning organic matter, sulfur dioxide mostly comes from burning coal and oil. And there are several coal power plants and oil refineries near Wuhan.