Facebook posts
stated on February 25, 2020 in a video:
Coronavirus patients are being "cremated alive" in China.

Hospital staff wash the emergency entrance of Wuhan Medical Treatment Center, where some infected with the coronavirus were being treated, in Wuhan, China, on Jan. 22, 2020. (AP)

As American officials brace for new potential coronavirus outbreaks, a conspiracy theory about the cremation of victims in China is gaining traction online. The source is a website connected to Steve Bannon and an exiled Chinese billionaire.

A Facebook video published Feb. 25 by a page called China Declassified asserts that coronavirus patients in Wuhan are being "cremated alive." The Chinese city was where the virus, officially known as COVID-19, first broke out in December.

The 15-minute clip starts by showing two people wearing face masks in a car. Speaking in Chinese, a woman who is purportedly a Wuhan resident claims she witnessed Chinese officials put a coronavirus patient in plastic bags while still alive.

The video then cuts to unrelated footage of the coronavirus outbreak and a newscast from NTD News. 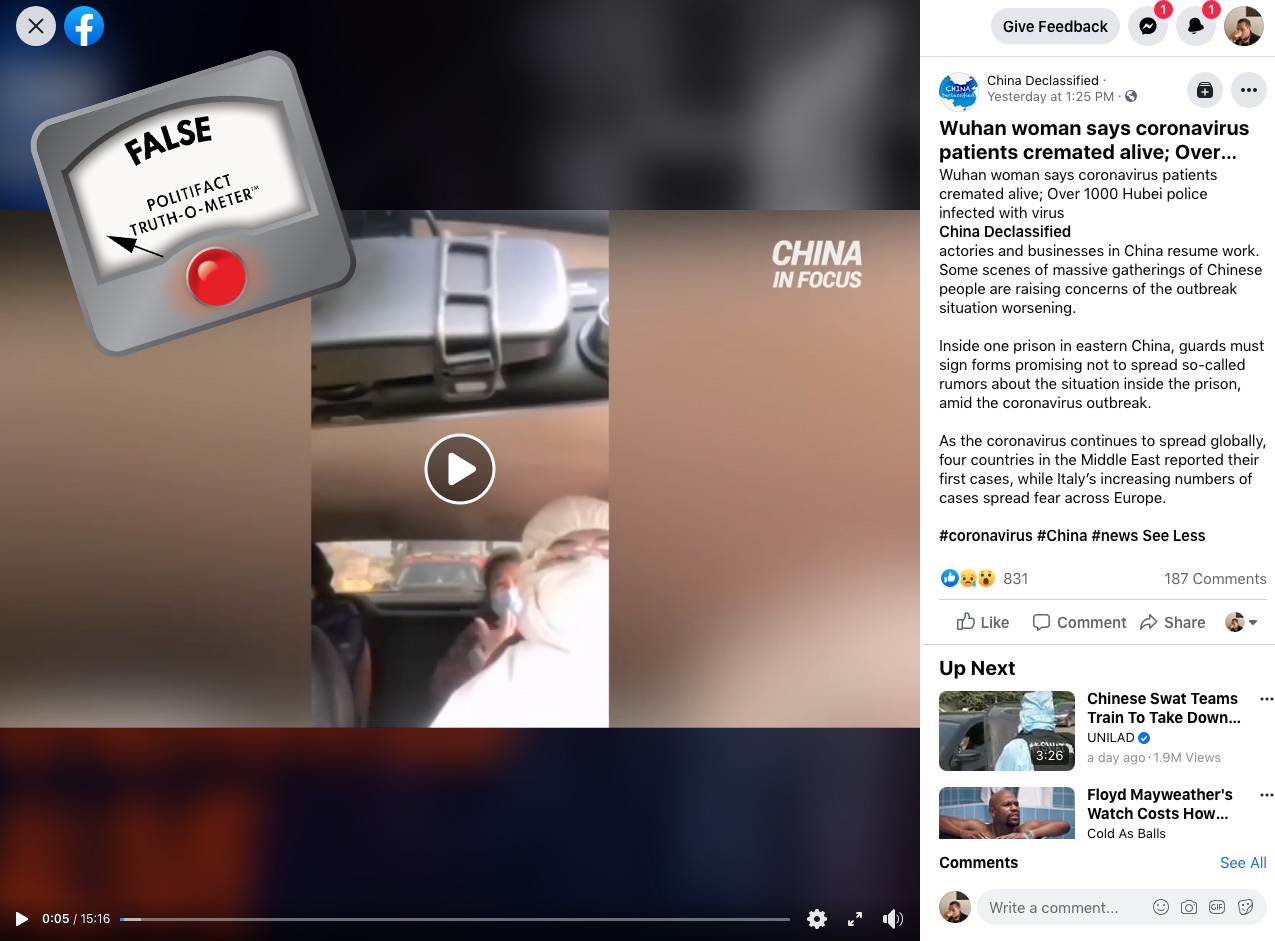 The post was flagged as part of Facebook’s efforts to combat false news and misinformation on its News Feed. (Read more about our partnership with Facebook.) It has been shared thousands of times on several different social media platforms.

According to the World Health Organization, the 2019 coronavirus has infected more than 81,000 people in 37 countries. The vast majority of the 2,761 deaths have occurred in China.

The Chinese government has ordered the swift cremation of patients who die after contracting the coronavirus. But there is no evidence they are being cremated alive.

About two months after the first 2019 coronavirus cases emerged in Wuhan, China’s National Health Commission issued an order requiring hospitals to notify funeral parlors and family members as soon as a patient dies.

"The funeral parlour is responsible for receiving and transporting the remains in time, setting up a special funeral service channel and a special cremation furnace, doing cremation work in accordance with the operating procedures, and issuing a cremation certificate," reads the order, which we translated using Google Translate. "Remains must not be stored or visited, and it is strictly forbidden to open the sealed remains bag during the whole process."

The order states that cremation can take place without their permission, and it prohibits funeral ceremonies.

The claim that officials are burning coronavirus patients alive stems from a YouTube video uploaded Feb. 24.

The vertical video, which has more than 46,000 views, shows the full clip that was posted by China Declassified. According to subtitles, the woman was purportedly hospitalized for the coronavirus and claims she saw officials put a male patient who was still breathing in several plastic bags and take him away.

The video was uploaded by Guo Wengui, a Chinese billionaire and political activist. Wengui fled China in 2014 in anticipation of corruption charges from the Communist Party. Since then, Wengui, who is a member of President Donald Trump’s Mar-a-Lago resort in Florida, has become known for his criticism of Chinese leaders.

A watermark for G News, the media arm of Wengui’s company Guo Media, appears on the YouTube video. The site, which also employs Steve Bannon, Trump’s former chief strategist and former executive chairman of Breitbart News, has previously published misinformation about the coronavirus. Other conspiratorial websites, such as pro-Trump outlet the Epoch Times, have amplified the video on social media.

We could find no other evidence that Chinese officials are cremating coronavirus victims alive. And to be clear, at no point does the video offer any firsthand evidence. We reached out to G News for the source of Wengui’s video, but we haven’t heard back.

China National Health Commission, "Notice on Printing and Distributing the Guidelines for the Disposal of Remains of Patients with Pneumonia Infected by New Coronavirus (Trial)," Feb. 1, 2020

The New York Times Magazine, "The Mystery of the Exiled Billionaire Whistle-Blower," Jan. 10, 2018

Snopes, "How a Pro-Trump Network Is Building a Fake Empire on Facebook and Getting Away with It," Nov. 12, 2019