Facebook posts
stated on November 4, 2020 in a screenshot:
"Six states can't get the votes counted. Six states in which @realDonaldTrump is leading. Six states where Dems are in charge."

A pro-Trump singer-songwriter is spreading misinformation about the ongoing vote count in several key battleground states.

"Six states can't get the votes counted," says text in the image, which was posted after 3 a.m. EST on Nov. 4. "Six states in which @realDonaldTrump is leading. Six states where Dems are in charge."

"Unbelievable," Villa wrote in the caption. "The Democrats are trying to steal this election from @realdonaldtrump. He WON. PERIOD!"

Villa’s post was flagged as part of Facebook’s efforts to combat false news and misinformation on its News Feed. (Read more about our partnership with Facebook.) It’s a screenshot of a Nov. 4 tweet from Villa, which has been shared more than 11,000 times.

We reached out to Villa for evidence to back up her claim, but we haven’t heard back. It’s unclear which states Villa was referring to, but her post is similar to other claims that said officials halted vote tallies in battleground states like Michigan, North Carolina and Pennsylvania to sway the results in favor of former Vice President Joe Biden. Those claims are inaccurate. 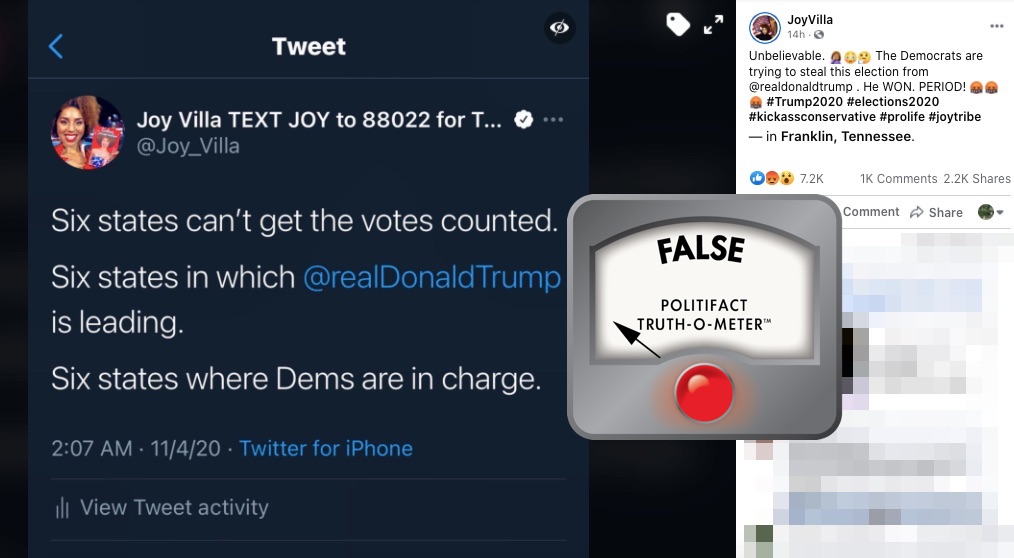 First, Trump has not won the election, despite claims from the president himself and social media users. A few key states that determine the path to the White House remain uncalled.

As of 5:45 p.m. EST on Nov. 4, the Associated Press had called a few battleground states in favor of Biden, including Wisconsin, Minnesota and Arizona. Other swing states, including Iowa, Texas, Ohio and Florida, have been called for Trump.

Some states in which Trump was leading overnight on Nov. 3 experienced delays in the ballot-counting process due to an influx of mail-in ballots, spurred by the coronavirus pandemic and preferred by Democratic voters. There is no evidence that states are deliberately stalling vote tabulation.

In three states — Michigan, Pennsylvania and Wisconsin, all of which have Democratic governors — election officials were not allowed to start counting mail-in ballots until Election Day or just before. That resulted in reporting delays overnight on Nov. 3, since mail ballots take more time to count than in-person votes.

Here’s the status of those states (which were all toss-ups around in the early morning hours of Nov. 4) as of 5:45 p.m. EST:

The situation in the South and the West is a little different.

Georgia, which has a Republican governor, experienced a delay after a pipe burst at a ballot counting facility in Atlanta. The Georgia secretary of state told reporters that, as of 5 p.m. EST, there were about 185,000 uncounted ballots in the state.

North Carolina, which has a Democratic governor, is finished counting in-person votes, but it will count provisional and absentee ballots that arrive by Nov. 12 as long as they’re postmarked by Election Day. Democrat-led Nevada, where polls closed later than other battleground states, also remains uncalled as it continues to count mail ballots, but Biden has an edge over Trump.

RELATED: Battleground states did not ‘stop counting’ votes on election night when Trump was ahead

Those delays do not indicate that anything is wrong — rather, they highlight the difficulty of holding an election during the coronavirus pandemic.

"Election results reporting may occur more slowly than prior years," says the U.S. Cybersecurity and Infrastructure Agency on a "rumor control" page. "This does not indicate there is any problem with the counting process or results. Official results are not certified until all validly cast ballots have been counted, including ballots that are counted after election night."

The Facebook post is wrong to say that battleground states "can’t get the vote counted" because Trump was ahead there. We rate it False.

The Hollywood Reporter, "Joy Villa Shocks in Pro-Trump "Impeached and Re-elected" Gown at the Grammys," Jan. 26, 2020

The New York Times, "Tracking Which News Outlets Have Called the Presidential Race in Each State," Nov. 3, 2020

NPR, "Why Vote Counting In Pennsylvania And Michigan Takes So Long," Nov. 4, 2020