Facebook posts
stated on November 9, 2020 in a series of videos:
Siri gave “CONFIRMATION of the Democrats' sinister plan to REMOVE Sleepy Joe immediately using the 25th Amendment and instate Kamala Harris as President!”

After four days of counting ballots, the 2020 presidential race was called for Joe Biden on Nov. 7. But some Facebook users say his election was a Democratic plot to put his running mate, Sen. Kamala Harris, in the White House.

Their evidence? Something Siri told some iPhone users over the weekend.

Southam’s post was flagged as part of Facebook’s efforts to combat false news and misinformation on its News Feed. (Read more about our partnership with Facebook.) Similar claims have been shared in hundreds of other posts, according to CrowdTangle, a social media insights tool. So we wanted to investigate. 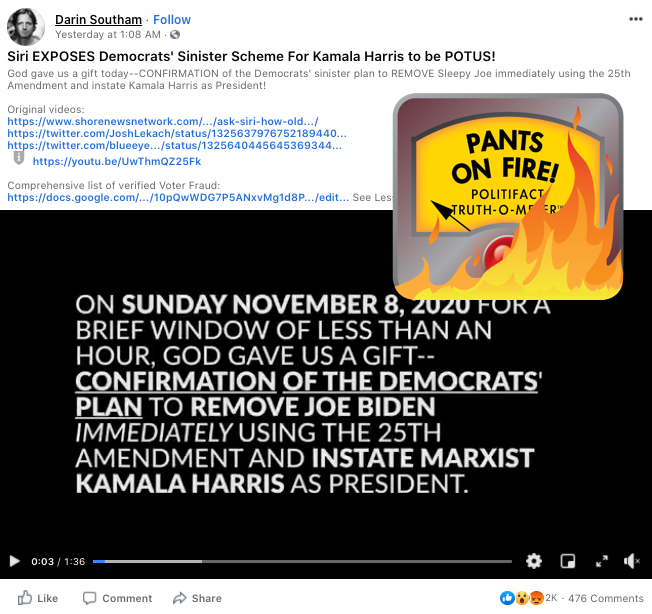 The 25th Amendment to the U.S. Constitution provides for the vice president to become president if the president is unable to do his or her job. But there is no evidence that Democrats are working to invoke the 25th Amendment against Biden — and if there were, it doesn’t stand to reason that Siri would reveal their plot.

The Siri responses were the result of a bug involving election data supplied by Wolfram Alpha, one of the websites that provide information to form Siri’s responses.

In one of the videos included in the Facebook post, Siri answered an iPhone user’s question with information from Wolfram Alpha, which describes itself as a "computational intelligence engine." Another version of the post shows that, at some point, Wolfram Alpha appeared to label Harris as president.

In a Nov. 9 tweet, the company acknowledged a problem with some of its data about the election, but said it had been fixed.

"The brief issue affecting data on Wolfram|Alpha about the US presidential election has now been corrected," the tweet says. "A bug in a new update process for handling uncertain/projected results caused garbled data to go live."

Danielle Rommel Mayer, director of outreach and communications, explained it this way: "A small mistake made by a data curator, and quickly aborted, led to a chain of issues within our new update system that caused an inconsistency to be introduced, and not detected by our automated testing. The ultimate result of this was that certain natural language queries produced garbled results that incorrectly accessed mismatched parts of (the) internal knowledgebase, without correct tagging."

In layman's terms: A mistake made by a data curator at Wolfram Alpha gave some iPhone users incorrect results when asking Siri about the age of the president. Rommel Mayer said the bug was fixed by 2:22 a.m. CST on Nov. 9.

The bug is not evidence that Democrats are trying to remove Biden, who will be the oldest president ever to take office.

The 25th Amendment has been the subject of conjecture and misinformation since House Democrats introduced a bill in October that would create a new body to take over the role of the Cabinet accordingly. The bill came days after President Donald Trump was diagnosed with COVID-19.

Trump tweeted Oct. 9 that Speaker Nancy Pelosi was "looking at the 25th Amendment in order to replace Joe Biden with Kamala Harris." There is no evidence that’s the case.

On Nov. 9, we tried asking Siri how old the president is. The assistant responded: "Donald Trump is 74 years old."

The Facebook post is not accurate and makes a claim based on a ridiculous premise that Siri would reveal a "sinister plan" by Democrats. Siri’s answer was the result of a mundane error. We rate this post Pants on Fire.

Congress.gov, H.R.8548 - Commission on Presidential Capacity to Discharge the Powers and Duties of the Office Act