Facebook posts
stated on October 2, 2020 in a series of images:
Says Donald Trump is not at Walter Reed National Military Medical Center, “he is on AF1.”

In this image released by the White House, President Donald Trump works in the Presidential Suite at Walter Reed National Military Medical Center in Bethesda, Md., on Oct. 3, 2020, after testing positive for COVID-19. (AP)

As Donald Trump fights to recover from the coronavirus, some social media users claim the president isn’t actually at a military hospital in Maryland.

"How can Trump Be In 2 Places at Once?!!! Is the World About to find out about Cl0nes?" another post asks. 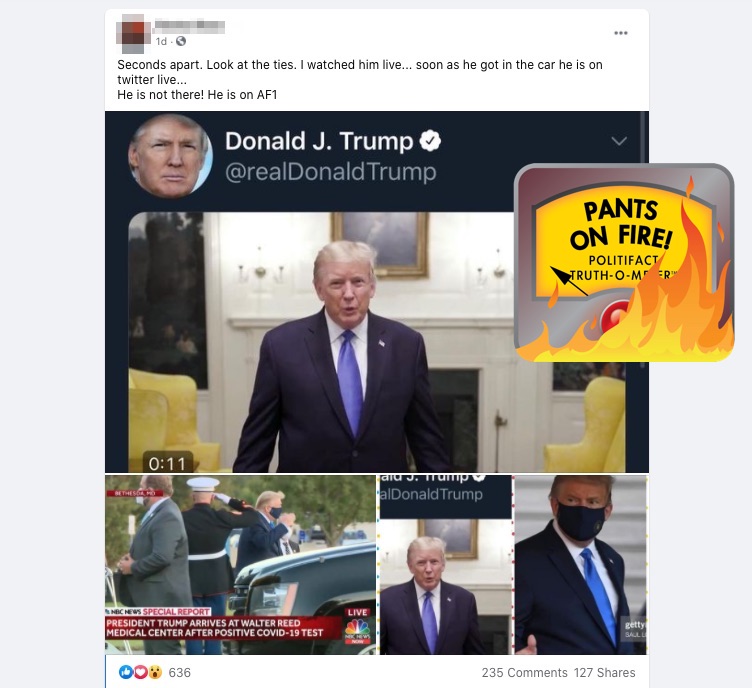 All of the posts were published by people who have promoted QAnon, a baseless conspiracy theory that says Trump is secretly fighting a cabal of Satan-worshipping, cannibalistic pedophiles. QAnon supporters have claimed that Trump’s hospitalization at Walter Reed National Military Medical Center is actually a cover for mass arrests and executions of his political foes.

There is no evidence that’s the case — and the Facebook posts are wrong to say that Trump is on Air Force One instead of staying at Walter Reed.

The posts rely on a mix of screenshots from QAnon accounts, photos of Trump and posts from Q, the anonymous internet persona behind the conspiracy theory. None of it proves Trump is on Air Force One. We reached out to the original poster for additional evidence, but we didn’t hear back.

How do we know Trump is at Walter Reed? Here’s a rough timeline of the president’s status over the past few days.

On Oct. 3, Trump’s medical team held a press conference on the president’s condition outside the hospital. Later in the day, Trump posted another video on Twitter thanking the healthcare workers at Walter Reed. The White House also released two photos that show Trump looking at documents or signing a piece of paper in the presidential suite at Walter Reed.

On Oct. 4, Trump’s medical team gave another update on his condition outside the hospital. Dr. Brian Garibaldi, a pulmonary physician, said the president could be discharged as soon as Monday.

A reporter for New York Magazine, Yashar Ali, debunked the claim that Trump wasn’t really at Walter Reed. Tweeting a version of the Trump video, he wrote: "I can't believe some of you conspiracy theorists are forcing me to do this, but a former USSS (Secret Service) agent who was on President Obama's detail has confirmed to me that this is indeed the larger office inside METU (Medical Evaluation & Treatment Unit) at Walter Reed."

There is also no evidence that Trump is faking his illness. That unfounded theory is outweighed by the significant amount of evidence showing that Trump does, in fact, have COVID-19.

PolitiFact, "The evidence that Trump is telling the truth about his positive coronavirus test," Oct. 2, 2020