Authorities apprehended Floyd Ray Roseberry of Grover, North Carolina, who parked a pickup truck on the sidewalk in front of the Library of Congress' Thomas Jefferson Building, as seen from a window of the U.S. Capitol on Aug. 19, 2021, in Washington. (AP

Soon after police negotiated the surrender of a North Carolina man who said he had a bomb in his truck outside the U.S. Capitol, conservative influencers on social media baselessly claimed that the standoff was a staged false flag event designed to make Republicans look bad.

The suspect, Floyd Ray Roseberry, appeared in federal court Aug. 20, one day after he drove his truck onto the sidewalk outside the Library of Congress. He was charged with threatening to use a weapon of mass destruction and explosives, according to court documents.

The charges undercut the "false flag" claims that trended on Twitter and spread to Facebook and Instagram, where they were flagged as part of Facebook’s efforts to combat false news and misinformation on its News Feed. (Read more about our partnership with Facebook.)

A false flag is an event in which the identity of the perpetrator is deliberately misrepresented so as to implicate another person or group. False flag conspiracy theories often spread after mass shootings and other major attacks, such as the Jan. 6 insurrection at the U.S. Capitol. 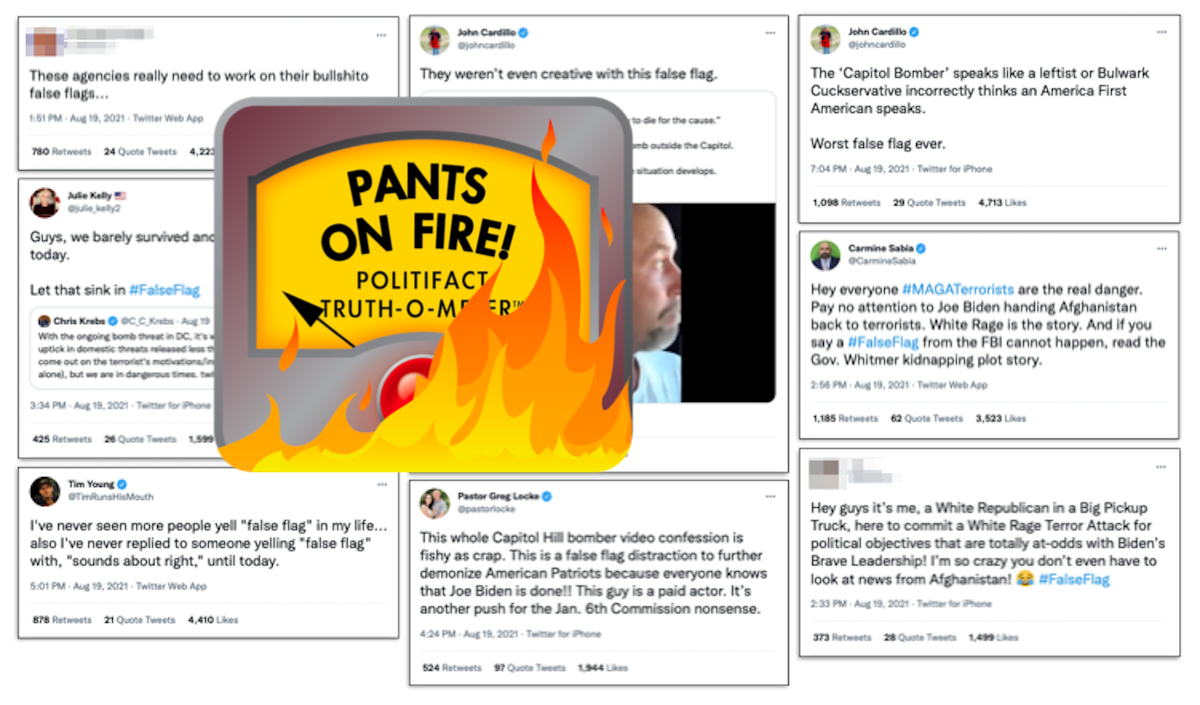 There’s no evidence that the Capitol bomb threat was a false flag, that it was staged, or that the suspect was actually an FBI agent, as some online rumors alleged. Roseberry confirmed his identity to investigators after his arrest, an FBI agent wrote in the affidavit.

"It was very much a real investigation," the Capitol Police told PolitiFact in a statement.

Roseberry traveled to Washington after telling his wife he was going fishing. He parked his truck, a black Chevrolet pick-up with no license plates, near the Capitol. Photos and video footage from the day depicted the scene as he engaged with and surrendered to police.

From his truck, Roseberry broadcast a live video to Facebook. He claimed to have explosives and demanded to speak with President Joe Biden. Facebook later removed the video and took down accounts associated with Roseberry from Facebook and Instagram, a spokesperson said.

Also in the video, Roseberry said that the 2020 election was stolen, called himself a "patriot," and stated that the "revolution starts today" — comments that reflected the beliefs of many of the pro-Trump rioters who are now facing charges after storming the Capitol on Jan. 6.

Similarly, the Washington Post spoke to people who know Roseberry, including his ex-wife, who described her shock at seeing his face on social media. She said she had received calls all day from friends and family who were expressing the same disbelief.

Congressional staffers and Washington residents who were at or near the Capitol as the threat unfolded also spoke to the Post. None indicated that the event, which prompted evacuations, was or seemed to them like a false flag.

Mark Fenster, professor of law at the University of Florida and the author of a book about conspiracy theories, said false flag claims are "an especially powerful version of how conspiracy theories try to instruct people that what they see, are told, and believe are wrong."

"A false flag claim turns what seems on its face to be an event that is easily explicable — the Capitol riot was conducted by far-right supporters of President Trump — into its opposite," Fenster said. He said such claims have been around for a long time, bolstered by the fact that some actual "false flag" operations have occurred or been planned in the past.

Tweets and other social media posts claimed that the Capitol bomb threat was a false flag.

There’s no evidence that the standoff that forced evacuations from the Capitol was a false flag.

There’s lots of evidence it was not, including photos, videos, witness statements, and court filings that lay out the charges against Roseberry and say he confirmed his identity to the FBI.

We rate these claims Pants on Fire!

The Washington Post, "Man claiming to have bomb near U.S. Capitol is in custody after standoff, police say," Aug. 19, 2021

Email interview with Mark Fenster, professor of law at the University of Florida, Aug. 19, 2021