Facebook posts
stated on January 5, 2021 in a video:
32,000 votes for David Perdue “disappeared” during the Georgia Senate runoff election.

An official counts ballots for Georgia's Senate runoff election at the Georgia World Congress Center on Jan. 6, 2021, in Atlanta. (AP)

Democrats are projected to take control of the Senate after Georgia’s runoff election, but on Facebook, some people are casting doubt on the vote-counting process. 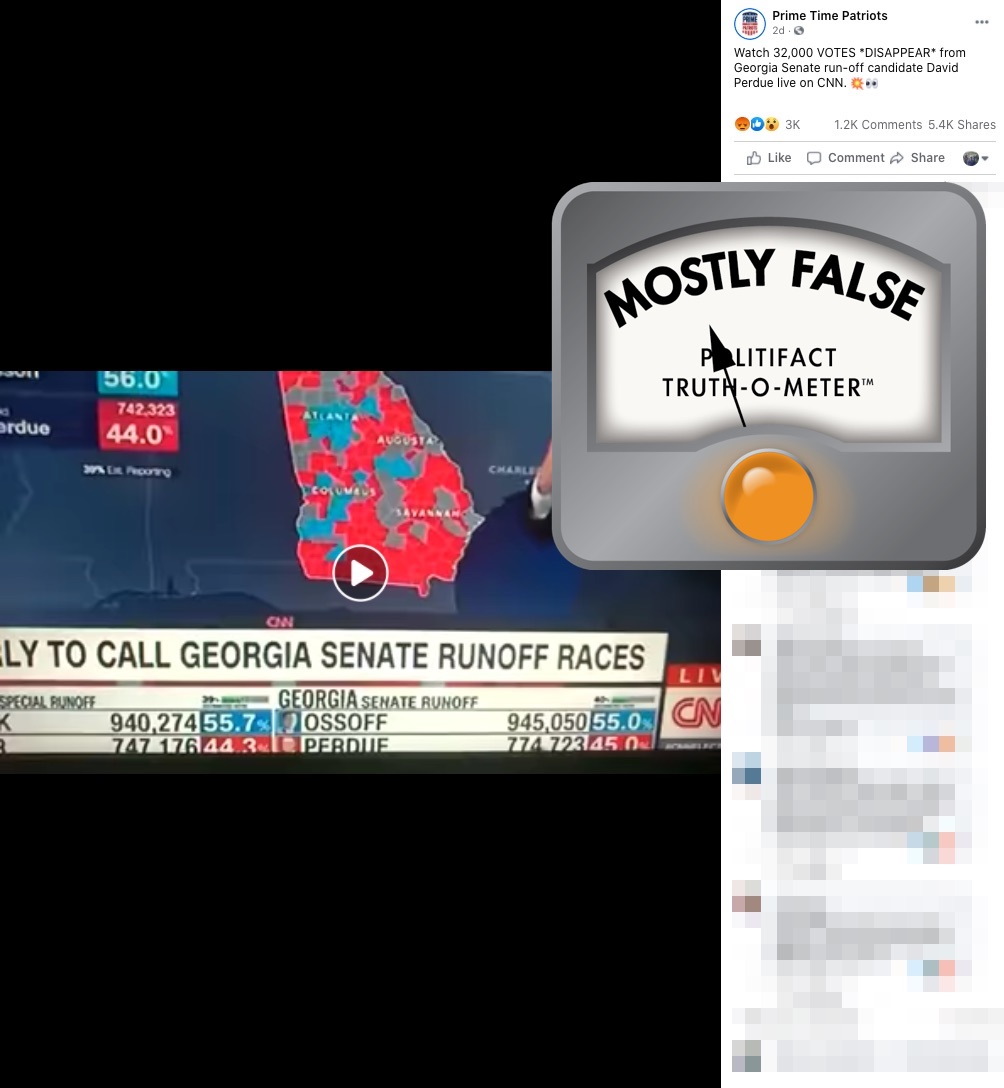 Prime Time Patriots also published the video on YouTube, where it has more than 27,000 views. We found dozens of similar claims about disappearing votes for Perdue using CrowdTangle, a social media insights tool.

After the 2020 presidential election, run-of-the-mill clerical errors in the vote counting process were taken out of context to spin a false narrative of voter fraud. So we wanted to take a closer look at claims that Perdue lost votes during the runoff.

Those claims are wrong — the Georgia secretary of state’s office told PolitiFact its data did not reflect a drop in votes for Perdue at any point. The tally appeared to change during CNN’s broadcast because the firm that the network gets its data from corrected an error.

Many news organizations don’t get their vote tallies directly from the states — they get them from third-party organizations. CNN receives data from Edison Research, a company that contracts with the National Election Pool, a consortium of American news organizations, to provide real-time vote results.

Rob Farbman, executive vice president of Edison Research, told PolitiFact in an email that the vote drop for Perdue actually corrected a previous mistake in the vote counting process.

"The vote drop for Perdue happened after we corrected an error that had erroneously added 32,000 to Perdue’s vote count in Bibb County," he said. "The incorrect vote was entered by a data entry operator reporting results collected by an Edison reporter stationed at the Bibb County Office. This error was corrected within five minutes and accounts for the brief additional 32,000 votes for Perdue."

We reached out to CNN for a comment, but we haven’t heard back.

RELATED: How will the Senate work under a 50-50 split?

Email from the Georgia secretary of state’s office, Jan. 6, 2021

The New York Times, "How Claims of Dead Michigan Voters Spread Faster Than the Facts," Nov. 6, 2020