House Democrats have filed an article of impeachment against President Donald Trump for "willfully inciting violence against the government of the United States" after the riot at the U.S. Capitol on Jan. 6 that temporarily stopped Congress from counting electoral college ballots.

With only nine days until Inauguration Day, the Democrats’ move to impeach Trump is unlikely to result in his removal from office. But a viral social media post says it could have lasting effects on his future in public life.

The post, published by the liberal Facebook page The Other 98% on Jan. 9, outlined four potential consequences for Trump if the House votes to impeach him for a second time:

"For those wondering if it’s worth impeaching him this time, it means he:

The post was flagged as part of Facebook’s efforts to combat false news and misinformation on its News Feed. (Read more about our partnership with Facebook.) Celebrities like comedian Jim Gaffigan and advocacy organizations like the March for Science have shared the post to millions of followers. 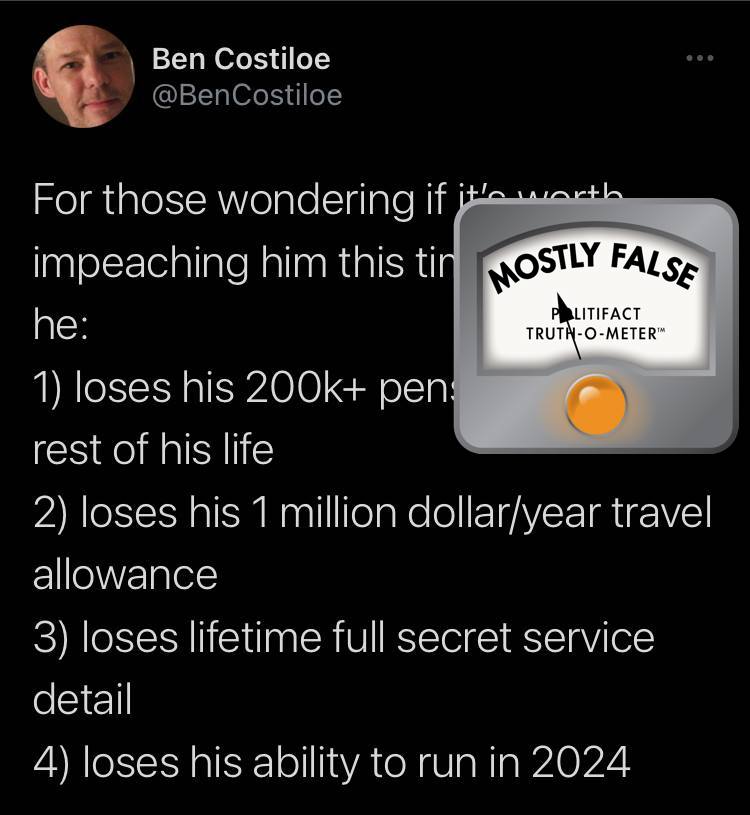 The source of the screenshot in the posts is a Jan. 8 tweet from Ben Costiloe, a 57-year-old man who lives in Texas. He told PolitiFact that he copied the text from something he saw on Facebook.

"I looked at it, and they didn’t have any followers," said Costiloe, whose own Twitter following has grown more than tenfold since publishing the post. "I thought about it and said, ‘Well, this isn’t completely true, but it could be true in a perfect world.’ So I threw it out there."

But Costiloe’s viral tweet paints a misleading picture of what could happen if Trump is impeached again.

If the Democratic-controlled House votes to impeach Trump, he would not automatically lose his post-presidency perks — two-thirds of the Republican-controlled Senate would have to vote to convict and remove Trump. Trump could lose his ability to run for office after he leaves the White House, but it would not happen solely as a result of impeachment.

The Constitution says, "Judgment in Cases of Impeachment shall not extend further than to removal from Office, and disqualification to hold and enjoy any Office of honor, Trust or Profit under the United States."

Most of the benefits afforded presidents were passed as part of the Former Presidents Act. Two benefits mentioned in Costiloe’s tweet — an annual lifetime pension of about $200,000 and annual travel allowance of up to $1 million — are enumerated in the law, which passed in 1958. The law says those benefits apply to presidents "whose service in such office shall have terminated other than by removal pursuant to section 4 of article II of the Constitution of the United States of America."

That section of the Constitution spells out the process by which a president may be removed from office "on Impeachment for, and Conviction of, Treason, Bribery, or other high Crimes and Misdemeanors."

"Impeaching him does nothing; only convicting him would," said Brian Kalt, a law professor at Michigan State University. "And under current law (the Former Presidents Act), convicting him only strips him of those benefits if he is convicted while still in office (which looks certain not to happen)."

Meanwhile, a 1962 law provides Secret Service protection for former presidents, at their request, "for a reasonable period after he leaves office."

"The FPA provides some limited security and travel expenses to former presidents and their spouses, but only if they aren't using the Secret Service protection that is provided under the other separate law," said Demian Brady, director of research for the National Taxpayers Union Foundation. "So the FPA's benefits specifically limit its benefits in the case of impeachment and removal, but the other law that provides Secret Service protection does not. A separate law would be required to (do) that."

Congress could pass a new law to strip Trump of his post-presidency benefits, and it would not require the same two-thirds vote that a conviction in the Senate would. But impeachment alone — even the second in Trump’s one-term presidency — wouldn’t disqualify Trump from receiving some benefits.

On the last point of Costiloe’s tweet, Kalt said Trump could lose his ability to run for office again "even after he has left office," if the Senate votes to convict him.

The Senate has never convicted an impeached president, much less a former president. However, Michael J. Gerhardt, a law professor at the University of North Carolina-Chapel Hill, wrote in a post for the Just Security law forum that, "if an impeachment begins when an individual is in office, the process may surely continue after they resign or otherwise depart."

"Understandably, members of Congress and the American people might lose the appetite for subjecting a president to impeachment once he has left office for good," he wrote. "But that is a political choice not a constitutional directive."

If the Senate did vote to convict Trump, the Constitution doesn’t specify how many votes are required to also disqualify him from holding public office. In the past, the Senate has used a simple majority vote to bar three people, all federal judges, from holding office.

A Facebook post says that if Trump is impeached again, he will lose his lifetime pension, travel allowance, Secret Service detail, and his ability to run for public office.

That claim misses the mark on most counts.

If the House votes to impeach Trump, the Senate would have to convict him while he’s still in office in order to revoke his lifetime pension and travel allowance. With only days until Biden takes over the White House, that prospect is unlikely, and Trump’s Secret Service detail would remain unaffected.

After Trump leaves the White House, the Senate could bar him from holding public office. Congress could also change the law to deny Trump his benefits. But neither would happen simply as the result of impeachment.

RELATED: Using the 25th Amendment or impeaching Trump: Could they happen?

Business Insider, "Here are all the US presidents who have been impeached," Feb. 6, 2020

Just Security, "The Constitution’s Option for Impeachment After a President Leaves Office," Jan. 8, 2021

Vox, "How Congress can permanently disqualify Trump from office after impeachment," Jan. 8, 2021