Jim Banks
stated on September 16, 2021 in a letter:
Says he is the "ranking member" of the House select committee investigating the Jan. 6 attack on the U.S. Capitol.

In at least one letter requesting information from a federal agency related to Congress’ probe of the Jan. 6 riot at the U.S. Capitol, Rep. Jim Banks falsely claimed that he is the top Republican on the House select committee investigating the attack.

Banks acknowledged that much on the House floor Oct. 21, when he criticized House Speaker Nancy Pelosi, D-Calif., for blocking him from serving on the committee. He is not listed as a member of the committee, and his official website does not say he is a part of it.

Yet he signed at least one letter, which was revealed Oct. 21 by Rep. Liz Cheney, R-Wyo., as the "ranking member," the term for the leading member of the minority party on a committee.

PolitiFact obtained a copy of one letter that Banks, an ally of former President Donald Trump, sent to Interior Secretary Deb Haaland on Sept. 16. The letter was entered into the congressional record by Cheney and first reported by CNN. Other letters went to the Justice Department, the Defense Department, and the Department of Homeland Security, the Daily Beast reported. 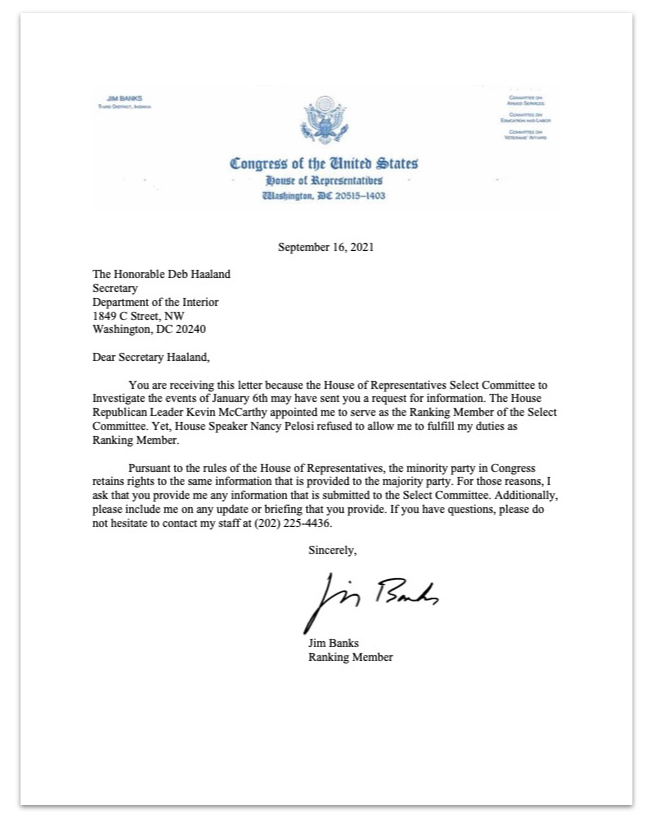 A copy of the Sept. 16 letter that Rep. Jim Banks sent to Interior Secretary Deb Haaland, which was obtained by PolitiFact. The letter was entered into the congressional record by Rep. Liz Cheney.

"You are receiving this letter because the House of Representatives Select Committee to Investigate the events of January 6th may have sent you a request for information," Banks wrote in his letter to Haaland. "The House Republican Leader Kevin McCarthy appointed me to serve as the Ranking Member of the Select Committee. Yet, House Speaker Nancy Pelosi refused to allow me to fulfill my duties as Ranking Member."

"I ask that you provide me any information that is submitted to the Select Committee," Banks wrote. "Additionally, please include me on any update or briefing that you provide."

Asked about the letter, a Banks spokesperson sent PolitiFact a statement criticizing focus on the signature as "a bizarre Democrat narrative meant to distract from the actual contents" of the letter.  "The letter — if read in full — tells the whole story: It clearly states that Rep. Banks was refused the opportunity to fulfill his duties as ranking member," the statement said.

House Minority Leader Kevin McCarthy, R-Calif., had initially tapped Banks to serve in that role as one of five Republicans on the 13-member Jan. 6 committee. But after Pelosi blocked the appointments of Banks and Rep. Jim Jordan, R-Ohio, and asked McCarthy to recommend two different Republicans in their place, McCarthy withdrew all five appointments, leaving Pelosi to round out the roster with Cheney and Adam Kinzinger, R-Ill., as the only Republicans.

In a statement, Pelosi cited "concern about statements made and actions taken by these members" as reason for excluding them. Banks, for example, claimed that the committee was created "solely to malign conservatives" and insisted on investigating the Biden administration and protests that occurred over the summer of 2020 in addition to the events on Jan. 6.

Republican senators previously killed an effort passed by the House to create an independent commission to investigate the Jan. 6 riot, similar to the body that investigated the 9/11 attacks.

Banks claimed in the signature of at least one letter to a federal agency that he is the "ranking member" of the House select committee investigating the Jan. 6 attack.

UPDATE, Oct. 26, 2021: This fact-check was updated to include a statement from Rep. Jim Banks’ office, which was sent to PolitiFact after publication. Our rating remains the same.

PBS Newshour on YouTube, "WATCH LIVE: House votes on whether to hold Steve Bannon in contempt of Congress," Oct. 21, 2021

Axios, "Pelosi says she did not reject Jordan and Banks over Electoral College objections," July 22, 2021

The New York Times, "Why Jim Banks and Jim Jordan Were Blocked From the Capitol Riot Panel," July 21, 2021

House Speaker Nancy Pelosi, "Pelosi Statement on Republican Recommendations to Serve on the Select Committee to Investigate the January 6th Attack on the U.S. Capitol," July 21, 2021