Facebook posts
stated on April 2, 2022 in a Facebook post:
Says Barack Obama tweeted, “Has anyone checked to make sure Donald Trump doesn’t have a Russian birth certificate?”

A fabricated tweet makes it look as though former President Barack Obama suggested publicly that his successor, Donald Trump, was born in Russia.

"I think most Americans would agree that I’m a level-headed individual, not a man who’s prone to indulging in conspiracy theories," says the tweet, which was created to look like it came from Obama’s verified Twitter account on March 16, 2022. "I’ve certainly had a fair number directed at me. But has anyone checked to make sure Donald Trump doesn’t have a Russian birth certificate?"

The tweet alludes to the "birther" conspiracy theory that Trump promoted for years about Obama, which falsely claimed that Obama was born in Kenya and ineligible to be president. It also alludes to Trump’s business ties to Russia and relationship with Russian President Vladimir Putin, who he recently called a "genius."

But the tweet is not real. Obama’s tweets on March 16 were posts sharing a trio of articles from the New York Times, Vox and USA Today that he said were "worth reading" about the war in Ukraine, followed by his picks for the NCAA Tournaments in men’s and women’s basketball. 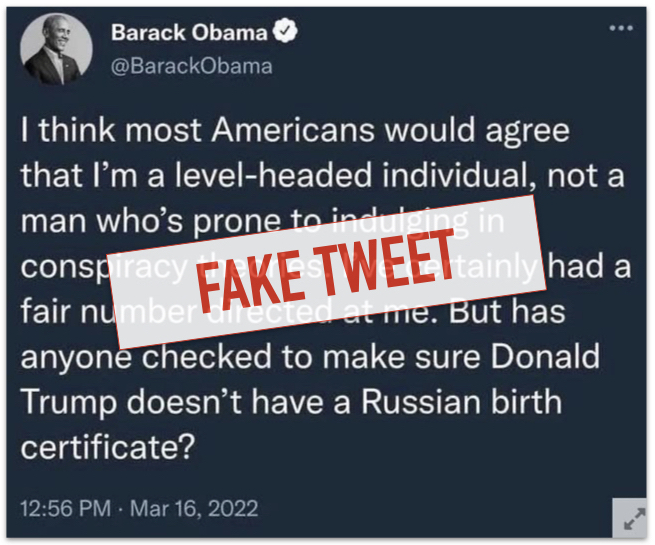 The fake tweet referencing Trump’s birth certificate does not appear on Obama’s Twitter page, nor does it appear on archived versions of it. It also doesn’t show up on Politwoops, a database of deleted tweets from politicians run by ProPublica, or in any credible news reporting.

Still, images purporting to show screenshots of the tweet have been shared widely across Twitter, Facebook and Instagram amid Russia’s invasion of Ukraine, racking up tens of thousands of likes and comments, according to CrowdTangle, a social media insights tool.

The earliest iterations of the fake tweet appeared on Reddit on March 16, PolitiFact found via reverse image searching. A Reddit user who creates fake tweets as a form of satire told Reuters that the fake Obama tweet was her creation.