Facebook posts
stated on July 2, 2020 in a meme:
People carrying guns can’t wear face masks to protect against the coronavirus because it’s a “class 4 felony.”

A popular meme of Kevin Hart and Keanu Reeves is spreading misinformation about face mask requirements and concealed-weapon permits.

Rapper King Chip shared the meme in a July 2 Facebook post. It shows a fictional exchange between Hart and Reeves.

"STOP! You have to wear a mask in here," the comedian says in the meme.

"I can’t, it’s a class 4 felony violating section 24-1(a)(9) prohibiting a mask while carrying a gun," the actor responds.

The post was flagged as part of Facebook’s efforts to combat false news and misinformation on its News Feed. (Read more about our partnership with Facebook.) Similar posts have been shared tens of thousands of times, according to CrowdTangle, an audience metrics tool. 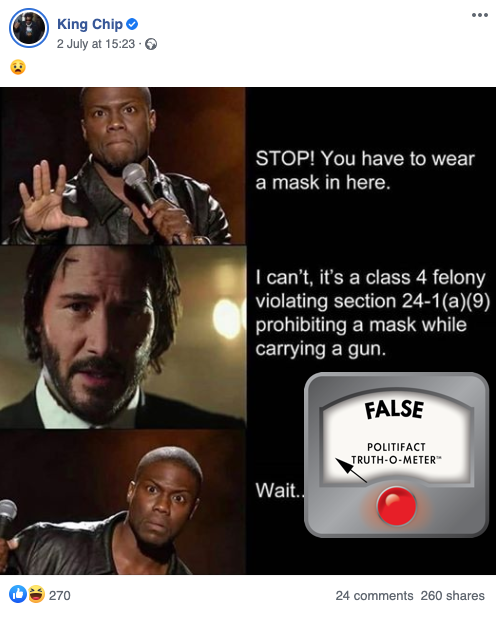 We’ve previously fact-checked inaccurate claims about face mask rules and concealed-weapon laws, so we wanted to investigate this Facebook post.

There is no federal law that bans carrying a concealed weapon while wearing a mask. The Facebook post comes from a blog post about an Illinois statute that prohibits carrying a firearm while wearing a face covering. But the Illinois State Police said that law does not apply to lawful concealed-weapon permit holders who abide by the state's COVID-19 mask requirements.

The claim stems from an April 25 article on a website called Illinois Leaks.

Illinois Leaks is run by the Edgar County Watchdogs, a nonprofit 501(c)(4) organization that aims to expose government corruption and waste. The article focuses on Illinois Gov. J. B. Pritzker’s April 30 executive order, which required the public to wear face coverings in public to slow the spread of the coronavirus. The order went into effect May 1.

It does neither of those things.

The source of the Illinois Leaks article is a state statute that says it’s illegal for someone to carry a gun when "hooded, robed or masked in such manner as to conceal his or her identity." Violating that law is punishable by a class four felony, which comes with a maximum prison sentence of three years, or six years for an extended term.

On its face, the article seems to have a point about the letter of the law and Pritzker’s executive order. But the spirit of those rules paints a different picture.

A statement published in late April by the Illinois State Police says the executive order "was not intended to negatively impact permit holders under the Illinois Concealed Carry Act while legally carrying firearms."

"The executive order does not require or suggest that law enforcement should arrest or criminally charge conceal carry license permit holders for wearing protective masks while in public as long as they are complying with the other provisions of the Illinois Concealed Carry Act and are not committing any other violations of Illinois law," the state police said.

The Illinois attorney general’s office told us that it would be up to the discretion of local prosecutors whether to bring charges against someone for violating the statute. The state police said in its statement that it expects police officers "will use appropriate judgment" and state’s attorneys "will likewise exercise sound prosecutorial discretion."

According to some tallies, about 15 states, as well as cities and counties, have anti-mask laws on the books that pre-date the coronavirus pandemic. Some states, especially those in the South, enacted those laws around the turn of the century to combat the Ku Klux Klan, whose members don white hoods.

One of those laws is in North Carolina. It prohibits people from covering their faces in public, but that law is currently suspended and does not mention firearms at all. We couldn’t find any other state where wearing a protective mask while carrying a concealed weapon is currently banned.

A Facebook post says wearing a face mask while carrying a firearm in public is a class four felony.

There is no federal law that bans carrying a concealed weapon while wearing a mask. There is a law against being "hooded, robed or masked" while carrying a gun in Illinois, but the Illinois State Police said the state’s COVID-19 mask requirements do not require law enforcement to arrest lawful concealed-weapon permit holders.