Tweets
stated on June 1, 2020 in a hashtag:
Says officials in Washington, D.C., are “jamming all communications.”

Demonstrators gather in Lafayette Park to protest the death of George Floyd on June 1, 2020, near the White House in Washington. (AP)

It had only been June for two hours when SoyBoy2020 sent the tweet.

The post was the first instance of the hashtag #dcblackout on Twitter that day. It got four retweets and 13 likes — not bad considering SoyBoy2020 has only five followers.

Under normal circumstances, it might have ended there. But by the end of June 1, #dcblackout had become a viral conspiracy theory on Twitter, highlighting how uncertainty surrounding Black Lives Matter protests around the country can lead to the rapid spread of misinformation on social media.

On May 31, demonstrations over the death of George Floyd, a black man who died in Minneapolis police custody after a white officer kneeled on his neck, hit a fever pitch in Washington, D.C. Protesters faced off with police and National Guard troops overnight. Multiple fires burned near the White House, and the Washington Monument was surrounded by smoke.

In the early hours of June 1, Twitter users like SoyBoy2020 used the chaos to plant the seeds of a false narrative about a government crackdown on protesters.

The hoax goes like this: To quell unrest at Black Lives Matter demonstrations, officials in Washington started "jamming all communications." That move prevented protesters from using their cell phones to contact each other.

"how does dc go from being on fire to being completely silent?? somethings not adding up," wrote one of the first Twitter users to share the hashtag, which has been mentioned hundreds of thousands of times.

RELATED: Fact-checking misinformation about the George Floyd protests in Minneapolis

Washington officials say there’s no evidence to support allegations of a communication blackout in the city.

"This appears to be misinformation. We have no confirmation of a cell phone blackout," said Alaina Gertz, a public affairs specialist at the Metropolitan Police Department, in an email.

D.C. Police Chief Peter Newsham and representatives from Verizon and AT&T have also debunked the claim. But that didn’t stop #dcblackout from taking off on Twitter.

By 3 a.m. on the East Coast — one hour after the first mention — the hashtag had been used tens of thousands of times. By 7 a.m., it was showing up in Twitter’s list of trending topics.

It’s not uncommon for hashtags containing misinformation to trend on Twitter. But experts say #dcblackout appears to have been part of a coordinated social media disinformation campaign.

Using a tool called Botometer, which detects whether Twitter accounts have bot-like characteristics, we determined that dozens of the accounts that first shared #dcblackout appear to be automated or partially automated. Others pivoted from tweeting infrequently or about other subjects to posting about Black Lives Matter protests — one sign that a coordinated disinformation campaign is afoot.

As people started waking up on the East Coast, the hashtag quickly grew as it was shared among protest sympathizers looking for answers. It incorporated other pieces of misinformation, such as a photo from the ABC show "Designated Survivor" that some Twitter users claimed showed Washington in flames.

One of the photos that was going around, looked similar to the photo above but was actually a screengrab from the ABC Show Designated Survivor. Make sure you do a reverse image search of photos before you share them, especially as news is quickly unfolding. pic.twitter.com/SOYHOE1ysH

Then things got weird.

Linvill noticed that several Twitter accounts started sharing the exact same language about #dcblackout. It started with a tweet from someone named Bethany at 9 a.m.

Yeah...... as someone seeing #dcblackout trending, who lives and works in the DC metro area, and who has friends telecommuting into DC rn..... This hashtag looks like misinformation. "No social media from DC" because we were asleep. Stop scaring people. #dcsafe

Botometer suggests that Bethany is a real account holder. But her tweet was copied verbatim hundreds of times by other accounts — including some that appeared to have been hacked.

This is alarming. Lol pic.twitter.com/7xbibbJBul

One of them was Jason Elia, an author and filmmaker who has a verified account on Twitter. At 11:18 a.m., he tweeted the exact same words that Bethany posted more than two hours before.

However, in a follow-up tweet, he said it wasn’t him.

The fuck?! I swear I did not tweet this. I’m in fucking Oklahoma City currently. I hate DC and very few reasons would ever get me to go there. Also I only tweet from iPhone. https://t.co/snRsQFgy4l

Hacking Twitter accounts is a tactic that disinformation campaigns employ to turn authentic users into propaganda machines. ProPublica reported that a recent coronavirus-related operation that uses hacked accounts has ties to the Chinese government.

In this case, Linvill said the goal of the disinformation campaign was probably to sow confusion by manipulating the conversation on both sides of the hashtag.

"This is not some guy in his basement," he said.

We reached out to Twitter repeatedly for a comment on #dcblackout, but we haven’t heard back. Spokesman Brandon Borrman told the Washington Post that the company has taken action against some of the accounts sharing the hashtag.

"We’re taking action proactively on any coordinated attempts to disrupt the public conversation around this issue," he said. "We are actively investigating the hashtag #dcblackout and during that process have already suspended hundreds of spammy accounts that tweeted using the hashtag."

On Twitter, users doubting the #dcblackout conspiracy theory added to its rise. Around noon, the bulk of accounts tweeting with the hashtag were authentic, according to Hoaxy, another tool that measures Twitter accounts with bot-like characteristics. 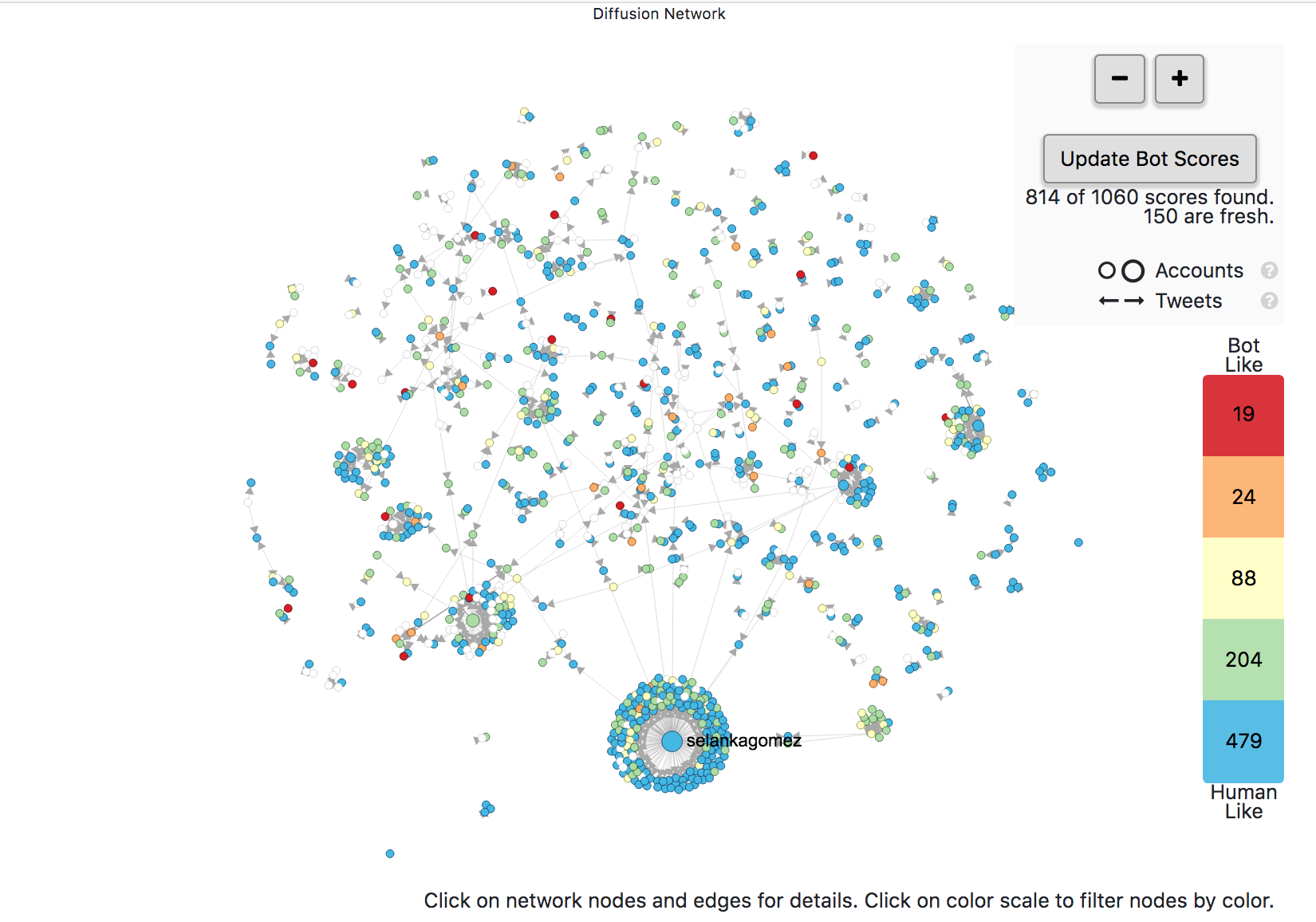 By 1 p.m., Google search results for the hoax returned no news articles about it, creating what misinformation researchers call a "data void," where the absence of credible information about a topic provides a fertile environment for misinformation to proliferate.

The conspiracy theory that Washington officials were restricting the communications of Black Lives Matter protesters also made its way to other social media platforms.

We found several examples of claims related to #dcblackout shared by political pages on Facebook. Some of the pages had names with terms used by far-right extremists and were created within the past few weeks.

Linvill said disinformation campaigns like #dcblackout prey on unsuspecting social media users to push a specific narrative. To avoid them, he suggests staying vigilant about what you share and how you protect yourself online.

"You have to realize that your social media account is a tool that other people want access to for a variety of reasons," Linvill said.

There’s no evidence of any effort. Experts say #dcblackout appears to have been part of a coordinated social media disinformation campaign that grew on Twitter and spread to other platforms.

The Guardian, "Fires light up Washington DC on third night of George Floyd protests," May 31, 2020

Mother Jones, "Inside the Bizarre Misinformation Campaign About a Hoax Blackout in DC," June 1, 2020

NPR, "'None Of This Is True': Protests Become Fertile Ground for Online Disinformation," June 1, 2020

ProPublica, "How China Built a Twitter Propaganda Machine Then Let It Loose on Coronavirus," March 25, 2020