Democratic Sen. Kamala Harris is the former attorney general of California. She has called herself the state’s "top cop." But Vice President Mike Pence said she would defund the police if Joe Biden is elected president.

"Americans can’t afford the radical left’s agenda," reads a message at the bottom, which links to a fundraising page for President Donald Trump’s re-election campaign.

The ad stands in contrast to some of the Trump campaign’s other messaging on Harris, which has criticized her as an overzealous prosecutor. We reached out to Pence’s press office, as well as the Trump campaign, for evidence or a comment, but we haven’t heard back.

Setting aside whether Harris could, as vice president, single-handedly dismantle police departments, is it true that she supports defunding the police? We took a closer look. 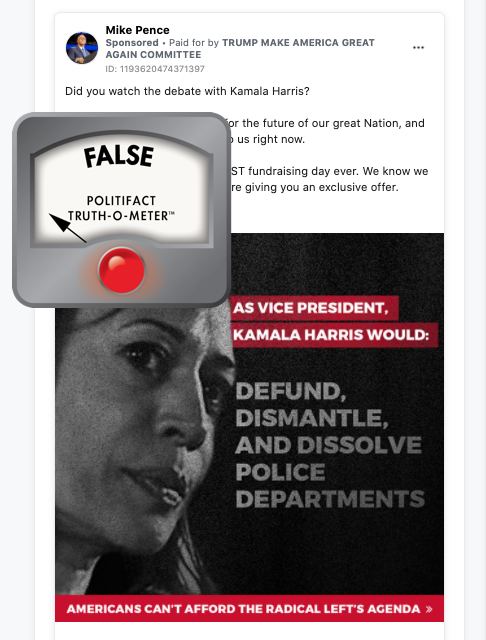 Pence’s ad is wrong. The Biden campaign says his administration would not work to defund the police, and Harris has not explicitly said she supports those calls.

Following the death of George Floyd, a Black man, in Minneapolis police custody in May, activists protesting against police brutality started to call for defunding the police. While some activists said they wanted to eliminate police departments entirely, others said lawmakers should reroute some of their funding toward other community services.

Biden says in his platform that, if he were elected, he "will not defund the police." We’ve previously rated several claims False for saying the opposite.

"He will condition federal funding on departments undertaking reforms," the platform says. "And, he will invest an additional $300 million in community-oriented policing, so officers can get out of their cruisers and get to know the communities they serve."

Harris, who co-sponsored a Senate bill that calls for criminal justice reform, also hasn’t said she wants to dismantle or dissolve police departments.

When Harris was a candidate for the Democratic presidential nomination, her criminal justice platform did not mention defunding or dismantling police departments. Her plan called for increasing funding for things like body cameras, mental health professionals, and "officer safety and wellness."

"Joe Biden and Kamala Harris do not support defunding the police, and it is a lie to suggest otherwise," said Sabrina Singh, Harris’ press secretary. "Throughout her career, Sen. Harris has supported increasing funding to police departments and boosting funding for community policing."

What Harris has said about police funding

While Harris has called for "reimagining" public safety in the United States, she has not said she supports defunding police departments.

In an early June episode of "The View," host Meghan McCain asked Harris:"Are you for defunding the police?"

After some back-and-forth about the definition, Harris demurred.

Harris has reiterated those talking points in several media appearances:

While Harris has alluded to some key points of the "defund the police" movement, she hasn’t offered her support. The Hill reported in June that, before she joined the Biden campaign, Harris was trying to "straddle the divide on the left over police reform."

Pence said in a Facebook ad that, as vice president, Harris would "defund, dismantle, and dissolve police departments."

In media appearances, Harris has called for "reimagining" public safety across the country. But she hasn’t explicitly said she supports defunding police departments, and Harris has said she doesn’t want to get rid of law enforcement.

Pence’s ad is inaccurate. We rate it False.

The Hill, "Harris grapples with defund the police movement amid veep talk," June 11, 2020

PolitiFact, "‘Defund the police’ movement: What do activists mean by that?" June 9, 2020

The Washington Post, "Trump and allies struggle to find a focused attack on Harris," Aug. 12, 2020