Facebook posts
stated on October 12, 2020 in a text post:
Says Joe Biden’s “capital gains tax means that when you sell your home you’ll owe taxes of 40% of your profit!”

If Joe Biden wins this year’s presidential election, you may have a big tax bill coming your way should you decide to sell your home — at least, that’s according to some folks on social media.

An Oct. 12 text post on Facebook claims the Democratic presidential candidate would dramatically increase capital gains taxes, affecting anyone who sells their home.

"Biden’s capital gains tax means that when you sell your home you’ll owe taxes of 40% of your profit!" the post says over a background of poop emoji. "Let that sink in."

The source of the post is a Trump-supporting real estate agent based in Eugene, Ore. We reached out to her for evidence to back up the post, but we haven’t heard back. So we looked into it. 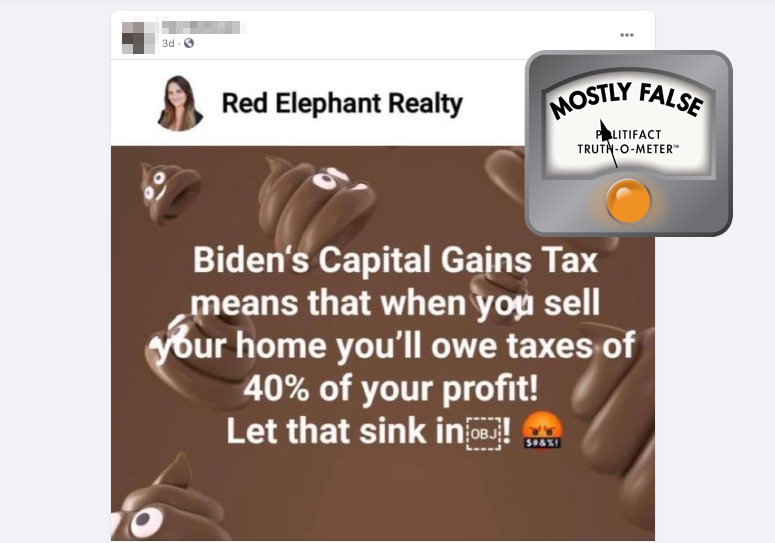 The post is wrong — several fact-checkers have debunked it.

Biden would increase capital gains taxes for Americans who make more than $1 million per year. Those taxes apply to home sales if sellers make hundreds of thousands of dollars in profit.

A capital gain is the difference between what someone paid for an asset, also known as the "basis," and what they sold it for. The capital gains tax is the main federal tax that the Internal Revenue Service imposes on real estate.

Biden has not proposed changing those exemptions. He also hasn’t advocated raising taxes on Americans making less than $400,000 per year, as we’ve reported.

Viral image
stated on November 3, 2021 in a Facebook post
Bergen County in New Jersey gave more votes to the Democratic gubernatorial candidate after all the ballots were counted.

On his official campaign website, Biden says he would double the long-term capital gains rate from 20% to 39.6%. His administration would use that money to help pay for Biden’s health care plan.

However, the 39.6% tax rate would only apply to those making more than $1 million per year. That means Biden’s proposal would not affect the vast majority of people — 8.5% of Americans make more than $200,000 annually.

According to the Internal Revenue Service, the capital gains tax rate "is no higher than 15% for most individuals."

What does that look like in practice? Let’s break it down.

Let’s pretend you’re married and file taxes jointly. You and your partner’s combined annual income is $650,000, putting your household in the IRS’ top federal income tax bracket. You decide to sell your house, which you purchased for $400,000. To your surprise, you get your full asking price of $700,000.

RELATED: No, Joe Biden doesn’t want to impose a federal tax on homes

Your capital gain would be $300,000 on the home — several times higher than the nationwide average. Since your household’s annual income is less than $1 million, Biden’s proposed capital gains tax rate would not apply to you. And since you’re married and file taxes jointly, you probably wouldn’t owe the IRS capital gains taxes anyway.

So in what real estate scenario would Biden’s proposed capital gains tax rate kick in?

For the vast majority of Americans, that is unlikely — and far from a blanket tax on home sales, as the Facebook post says.

Lead Stories, "Fact Check: Biden's Capital Gains Tax Does NOT Mean That When You Sell Your Home You'll Owe Taxes Of 40% Of Your Profit," Oct. 13, 2020