Facebook posts
stated on October 24, 2020 in a text post:
"The daughter of Sen. Coons (D-DE), along with 7 other underaged girls are featured on Hunter's laptop! - Breitbart News"

The unproven claims of a Delaware Senate candidate have inspired a rash of conspiratorial Facebook posts about Joe Biden’s son.

"BREAKING: The daughter of Sen. Coons (D-DE), along with 7 other underaged girls are featured on Hunter’s laptop! - Breitbart News," the post says.

The post was flagged as part of Facebook’s efforts to combat false news and misinformation on its News Feed. (Read more about our partnership with Facebook.) The claim has also made its way to TikTok and YouTube.

Since the New York Post published a story Oct. 14 in which it claimed to have information from a computer hard drive owned by Hunter Biden, similar unproven attacks against him have swirled on social media. So we took a closer look at this claim. 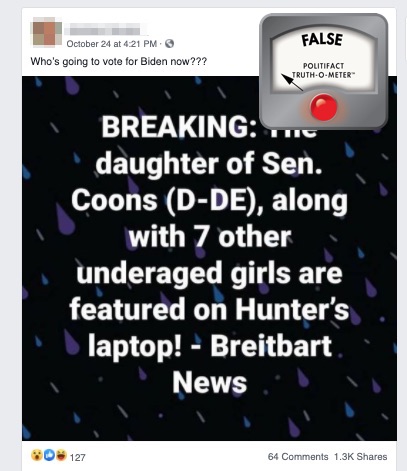 There is no evidence that a computer hard drive previously belonging to Hunter Biden contains illicit images of Coons’ teenage daughter. The claim comes from a U.S. Senate candidate who has previously shared posts related to QAnon, a baseless conspiracy theory about child sex trafficking.

On Oct. 24, Lauren Witzke, a Republican who’s running against Coons to represent Delaware in the Senate, tweeted an audio clip from an interview with Breitbart News. The post has been shared more than 8,700 times and amplified by conservative outlets like the Gateway Pundit.

During the interview, Witzke made a variety of accusations against Joe Biden, including that he is "owned by China." While discussing Hunter Biden’s purported laptop, she said: "Chris Coons' daughter, in addition to seven other underage girls, are also featured on the laptop."

Breitbart did not independently report this as news, as the Facebook posts make it seem.

Coons is one of Joe Biden’s biggest supporters in Washington, and his daughter has previously been the subject of disinformation that falsely claims Biden is a pedophile. One often-used photo shows Biden touching her arm as he leans in to whisper something.

In her interview with Breitbart, Witzke cited "sources close to and that have deep knowledge in the investigation." We reached out to her for evidence to substantiate her comments, but she did not offer any. We haven’t heard back from the Biden campaign.

Her comments play into QAnon, a baseless conspiracy theory that claims President Donald Trump is secretly fighting a cabal of Democratic, Satan-worshipping, cannibalistic pedophiles. Before winning Delaware’s Republican primary in September, Witzke tried to distance herself from QAnon. But Witzke has been photographed wearing a T-shirt sporting a giant "Q" and tweeted a slogan used by its supporters.

There is no publicly available evidence to support Witzke’s claim — and neither Breitbart nor the New York Post have reported such a finding.

The New York Post’s story about Hunter Biden relies on information from a computer hard drive that the tabloid said it received from Rudy Giuliani, President Donald Trump’s personal lawyer. The computer was supposedly left unclaimed at a Delaware computer shop, the owner of which called the FBI and a Giuliani associate after noticing a sticker for the Beau Biden Foundation on the laptop. We are not able to verify the emails cited in the Post’s article, which claims Hunter Biden set up a meeting between his father and a Ukrainian businessman.

But the story does not establish that such a meeting ever took place, and the Post did not report that Hunter Biden possessed images of minors. The FBI declined to comment for a previous fact-check due to its practice of "neither confirming nor denying the existence of an investigation." Giuliani also hasn’t returned our messages about the hard drive. No other news organizations have seen or corroborated the data supposedly on the laptop.

Because of that, we can’t say for certain what is or isn’t on the hard drive at the center of the New York Post’s story.

The Facebook posts say, "The daughter of Sen. Coons (D-DE), along with 7 other underaged girls are featured on Hunter's laptop!" The posts are attributed to Breitbart, but the conservative news and opinion site did not publish such an allegation. A U.S. Senate candidate, running against Coons, repeated this claim in an interview with Breitbart. The candidate offered no evidence to back up her claim about illicit material on a computer hard drive connected to Hunter Biden.

We rate the unproven claim False.