L. Lin Wood
stated on January 25, 2021 in an interview with the Patriotically Correct Radio Show:
“I believe, without having definitive proof, that the military is in charge of our country ... because Joe Biden is an illegal president.”

Nearly a week after President Joe Biden was inaugurated, supporters of Donald Trump are still spreading conspiracy theories that he isn’t actually running the country.

In a Jan. 25 interview with the conservative Patriotically Correct Radio Show, Lin Wood, a defamation lawyer, said Biden’s presidency is a sham.

Later in the video, Wood floats the theory that Biden has been signing blank pages or executive orders "prepared for him by the people that control him." The clip was published on Facebook and flagged as part of the company’s efforts to combat false news and misinformation on its News Feed. (Read more about our partnership with Facebook.) 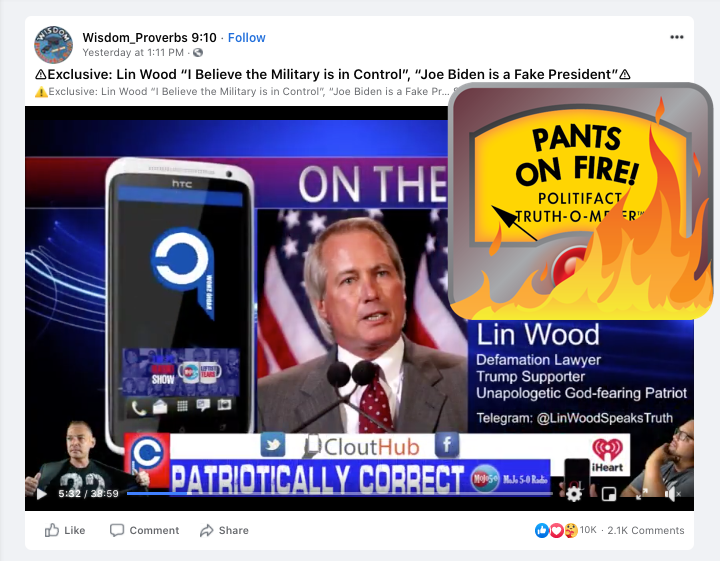 Wood was banned from Twitter in early January after he promoted the Capitol insurrection and false claims about the results of the 2020 presidential election. He has also promoted the baseless QAnon conspiracy theory; Wood’s claims about "little children being abused, molested, and sacrificed" by "leaders in our government" were aired on the Patriotically Correct Radio Show before his appearance.

We’ve previously fact-checked false statements from Wood about the 2020 election, as well as rumors about a military takeover of the federal government. So we wanted to take a look at this post, too.

Biden is not an "illegal president," and there is no evidence that the military is running the country.

Biden’s election was legal, and followed the process spelled out in Article II of the Constitution. All 50 states and the District of Columbia have certified their election results, which Congress finalized on Jan. 7. Biden won 306 electoral votes, while Trump won 232. Since Biden got more than 270 electoral votes, he is the rightful president.

Biden was duly sworn into office Jan. 20, after which he and first lady Jill Biden moved into the White House. Trump gave a farewell speech the same day.

There is no credible evidence that voter fraud affected the election outcome. Here’s how we know that:

Before Inauguration Day, QAnon supporters said the military would take over the federal government instead of Biden becoming president. That did not come to pass, and the U.S. is not under a military dictatorship.

We reached out to Wood for a comment, but we haven’t heard back.

His statement is inaccurate and ridiculous. We rate it Pants on Fire!

RELATED: A note to our readers who think President Trump won

Constitution of the United States