What we know about the source of the coronavirus pandemic

This undated electron microscope image made available by the U.S. National Institutes of Health in February 2020 shows the Novel Coronavirus SARS-CoV-2, yellow, emerging from the surface of cells, blue/pink, cultured in the lab. (NIAID-RML via AP)

Since the beginning of the coronavirus pandemic, theories have swirled online about its source. Many early posts claimed the virus originated in a Chinese lab as a bioweapon.

PolitiFact and other fact-checkers debunked those conspiracies. Now, there is new reporting that suggests the virus could have come from a lab in Wuhan, China, the epicenter of the outbreak.

Washington Post columnist Josh Rogin reported April 14 that officials at the United States Embassy in Beijing sent two official warnings to Washington about safety problems in the Wuhan Institute of Virology. In 2015, the facility became China’s first lab to achieve the highest level of international bioresearch safety. That designation meant the lab could experiment with the world’s most dangerous pathogens — including coronaviruses that come from bats, like the novel coronavirus and Severe Acute Respiratory Syndrome.

Yahoo News published a similar story on April 14. A day later, Fox News cited anonymous sources to report that the researchers at the Wuhan Institute of Virology may have been studying the novel coronavirus, and that patient zero worked at the lab.

"There is increasing confidence that the COVID-19 outbreak likely originated in a Wuhan laboratory, though not as a bioweapon but as part of China's attempt to demonstrate that its efforts to identify and combat viruses are equal to or greater than the capabilities of the United States," the network wrote.

When asked about the reporting during the April 15 coronavirus press briefing, President Donald Trump said the federal government is "doing a very thorough examination of this horrible situation that happened."

The media reports emphasize that there is still no conclusive proof that the coronavirus came from the lab. But they present new information about the potential source of the pandemic, so we wanted to review publicly available evidence about the source and spread of the coronavirus — and what is still unproven.

Scientists widely believe that bats are the source of the novel coronavirus.

SARS-CoV-2, the official name of the virus that causes COVID-19, is a betacoronavirus, like Middle East Respiratory Syndrome and Severe Acute Respiratory Syndrome. All three viruses have their origins in bats, according to the U.S. Centers for Disease Control and Prevention.

Specifically, scientists have linked the genetic structure of the novel coronavirus to the horseshoe bat, which is common in southern and central China. The virus is "zoonotic," meaning it spread from animals to humans, according to a report from 25 international experts, including some from China and the U.S., convened by the World Health Organization.

Although betacoronaviruses originate in bats, they sometimes can jump to another species before infecting humans. Chinese researchers have found a possible link between COVID-19 and pangolins, a mammal covered in scales.

Scientists still aren’t sure how the novel coronavirus made the jump from its intermediate host to humans. Despite a popular narrative online, there is no evidence that eating meat was part of the equation.

Past epidemics could offer some clues. Scientists first thought the Ebola outbreak started with the consumption of bat meat in Guinea. But Time reported that patient zero was likely infected by bat droppings that contaminated something she put in her mouth. MERS was also primarily spread through contact with live camels as opposed to camel meat.

The coronavirus outbreak was first documented in Wuhan in December. But the first actual case of COVID-19 was in November, according to Chinese government data.

The South China Morning Post reported March 13 that, based on government data it had obtained, the earliest case of the novel coronavirus was Nov. 17 in a 55-year-old resident of Hubei Province. From that point on, one to five new cases were reported each day, but health care workers did not know they were dealing with a new virus until December.

"Chinese authorities have so far identified at least 266 people who were infected last year, all of whom came under medical surveillance at some point," the newspaper reported. "Some of the cases were likely backdated after health authorities had tested specimens taken from suspected patients." 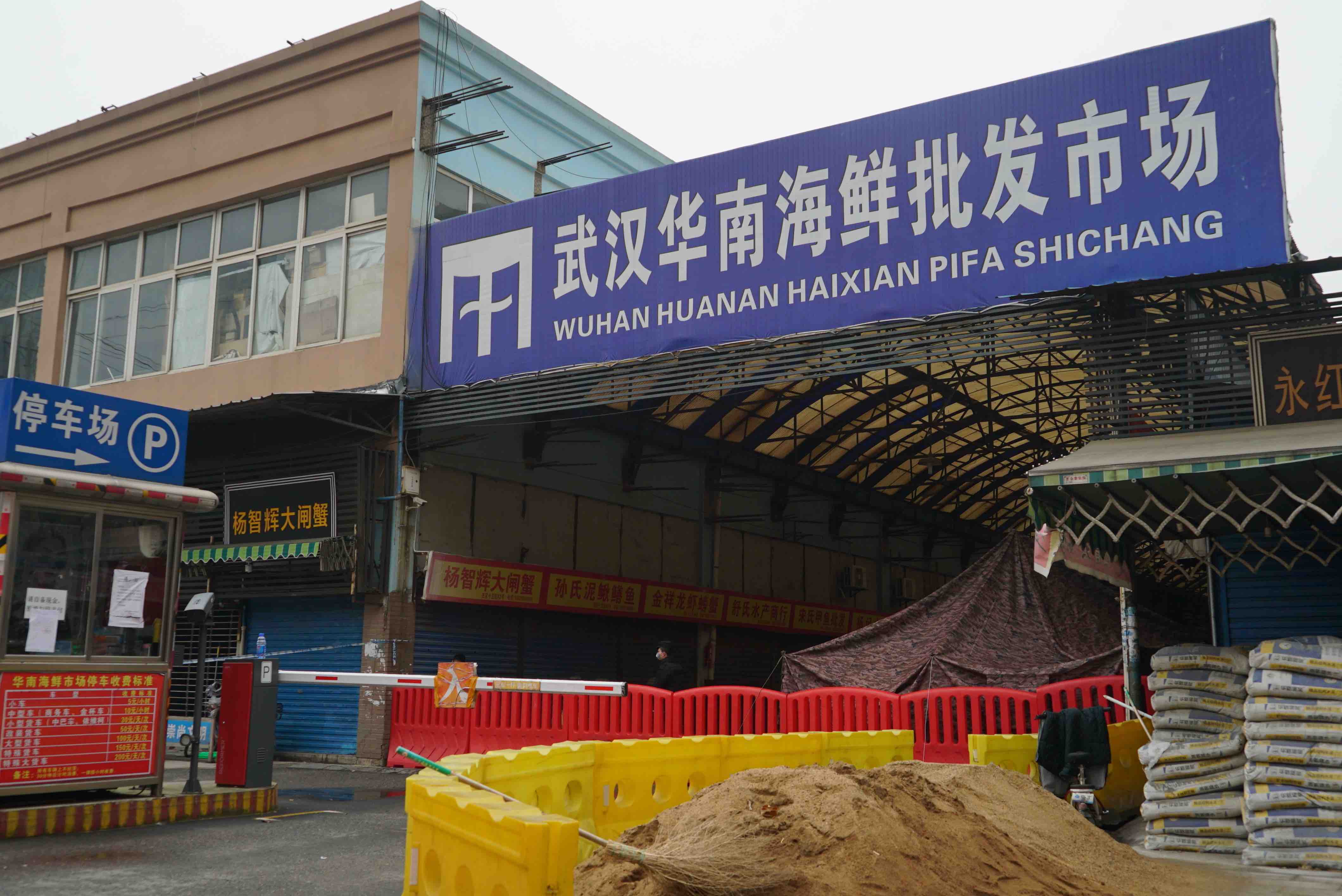 The Wuhan Huanan Wholesale Seafood Market, where a number of people related to the market fell ill with a virus, sits closed in Wuhan, China, on Jan. 21, 2020. (AP)

One of the earliest coronavirus cases in Wuhan was in early December. At first, many of the patients in the city had some link to a large seafood and live animal market, suggesting animal-to-person spread, according to the CDC. Later, a growing number of patients reportedly did not have exposure to animal markets, indicating person-to-person spread.

On Dec. 27, Wuhan health officials were told that the disease was a new coronavirus. Four days later, China notified the WHO about the outbreak.

As the number of coronavirus cases ballooned in China and spread to other countries, social media users and bloggers started to speculate that the virus escaped from a lab near Wuhan.

At the time, there was no evidence to back up those claims, and health officials are still investigating the source of the pandemic. But given recent media reports, let’s review what we know about a lab that conducts infectious disease research near Wuhan.

The Wuhan National Biosafety Laboratory is a maximum-security biolab that deals with some of the world’s most dangerous pathogens. It is housed within the Wuhan Institute of Virology, which is part of the larger Chinese Academy of Sciences and has been the subject of reporting from outlets like the Washington Post and Fox News.

The lab is located southeast of central Wuhan — about 8.5 miles from the animal market connected to the earliest reported cases in the city. The Chinese government started building it in 2005 after the 2003 SARS epidemic to prepare for and respond to future outbreaks, according to a CDC report. The lab was completed in 2015.

The Wuhan National Biosafety Laboratory has experimented with human betacoronaviruses in the past. In 2017, researchers published a study of SARS-related coronaviruses based on five years of surveillance in "a cave inhabited by multiple species of horseshoe bats in Yunnan Province, China."

Nature magazine reported in February 2017 that some scientists outside China were concerned about pathogens escaping from the lab given the fact that it had happened elsewhere in the country. A 2004 outbreak of SARS was linked to a Beijing research lab, from which the WHO said the virus spread to the public.

US officials investigating source of coronavirus

American intelligence agencies are investigating whether the novel coronavirus could have originated in a lab, despite denials from the Chinese government and the Wuhan Institute of Virology.

"We know that this virus originated in Wuhan, China. We know that there is the Wuhan Institute of Virology just a handful of miles away from where the wet market was," Secretary of State Mike Pompeo said during an April 15 interview on Fox News. "There’s still lots to learn. The United States government is working diligently to figure it out."

Despite the speculation, the Trump administration officials have been careful to say that all evidence points to the fact that the coronavirus occurred naturally. When asked during an April 14 press briefing about the possibility that the coronavirus leaked from a lab, Joint Chiefs of Staff Chairman Gen. Mark Milley said the evidence is "inconclusive."

RELATED: Timeline: How Donald Trump responded to the coronavirus pandemic

Research shows that the virus could not have been created in a lab, as many conspiracy theories have suggested. An article published March 17 says the genetic makeup of the coronavirus, documented by researchers from several public health organizations, does not indicate it was altered.

However, that finding does not preclude the possibility that Chinese researchers were studying the novel coronavirus in a lab when it managed to spread outside the lab, although the government has denied that notion.

The Wuhan Institute of Virology said in a February statement that the rumors had "caused severe damage to our researchers who have been dedicated to working on the front line." When asked about Fox News’ reporting during an April 16 press briefing, Zhao Lijian, a spokesman for China’s Foreign Ministry, denied it.

"China's position with regard to the origin and transmission routes of the novel coronavirus is clear," he said. "It is a matter of science on which we should only rely on the findings of scientists and medical experts."

Fox News, "Sources believe coronavirus outbreak originated in Wuhan lab as part of China's efforts to compete with US," April 15, 2020

PolitiFact, "No evidence that coronavirus was faked to cover up ‘5G Syndrome,’" March 9, 2020

The Wall Street Journal, "How It All Started: China’s Early Coronavirus Missteps," March 6, 2020

The Washington Post, "Early missteps and state secrecy in China probably allowed the coronavirus to spread farther and faster," Feb. 1, 2020