Former Lt. Gen. Thomas McInerney speaks during a video in which he makes a variety of false claims. (Screenshot from YouTube)

In a video viewed tens of thousands of times on Facebook, a retired Air Force officer makes a slew of inaccurate and baseless claims about everything from the Capitol insurrection to the coronavirus pandemic.

The video, one of hundreds we found on Facebook, shows former Lt. Gen. Thomas McInerney speaking to a group of eight un-masked people as classical music plays in the background.

Over 19 minutes, McInerney — a former Fox News analyst and military adviser for the Trump campaign — spins a conspiracy theory that claims Democrats coordinated with the Chinese government to create COVID-19 and commit voter fraud to oust President Donald Trump. As a result, he said, Trump is using the aftermath of the Capitol insurrection to pursue justice. 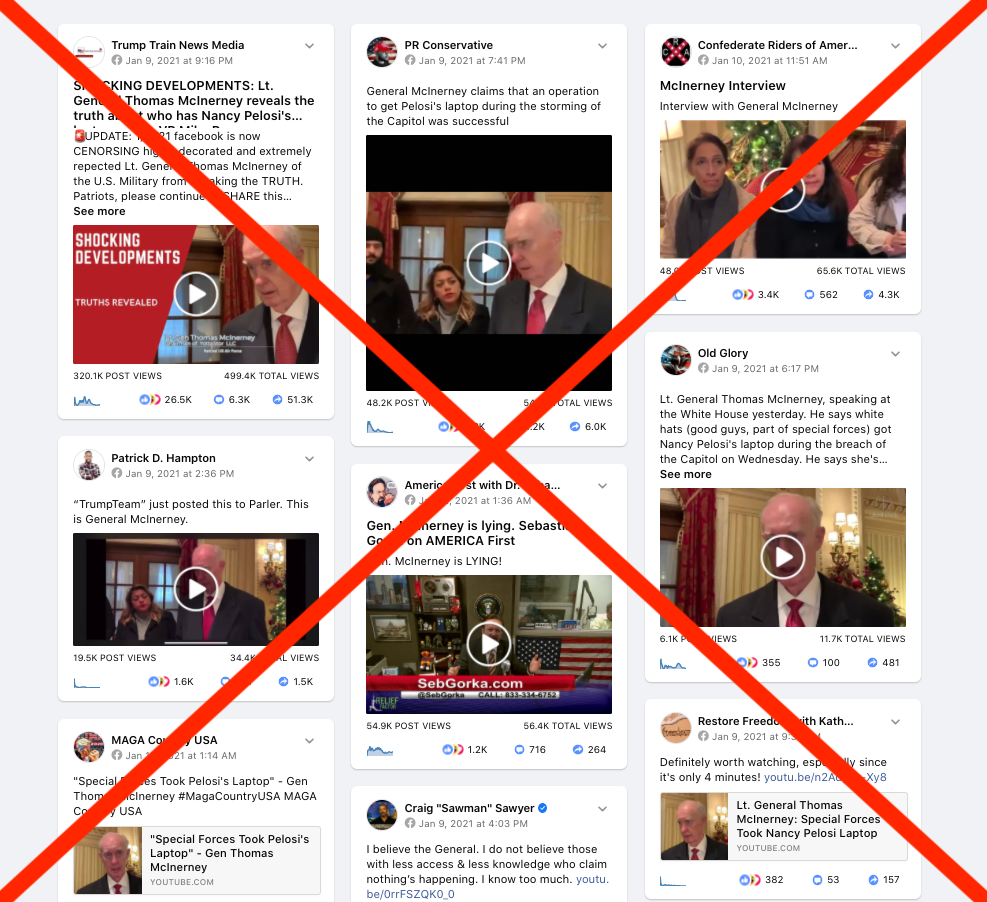 The location and source of the video is unclear, but the earliest version we could find was published Jan. 8, 2021, on YouTube by Ann Vandersteel, who has previously promoted the Pizzagate conspiracy theory (an earlier version of QAnon). From there, it was copied to other YouTube channels and promoted on Twitter, Facebook and Parler, before the platform was taken offline.

PolitiFact debunked several of the false claims McInerney made during the video. We reached out to McInerney through his company YottaStor for a comment, but we haven’t heard back.

Claim: ‘COVID-19 was a biological attack on the world … it was a direct attack on the election and they knew what was going to happen’

McInerney’s claim is one of the longest-running falsehoods about the pandemic. The scientific community and international public health organizations have said the coronavirus emerged from bats and later jumped to humans.

Scientists worldwide have publicly shared the genetic makeup of the coronavirus thousands of times. If the virus had been altered, there would be evidence in its genome data. But there isn’t.

Claim: ‘A program called Hammer and Scorecard (was) going to be used as a cyber warfare tool to change the voting — and it did’

Since Election Day, Trump fans have spread a conspiracy theory that says a CIA package of computer programs hacked into the 2020 presidential election results. The theory claims one program, called Hammer, cracks into protected networks, while another, called Scorecard, changed vote totals.

Chris Krebs, former head of the Cybersecurity and Infrastructure Security Agency, said in a Nov. 7 tweet that the theory was "nonsense." One of the main promoters of Hammer and Scorecard was a discredited military contractor who claimed to have created the programs.

There is no evidence of voter fraud affecting the outcome of the 2020 election. Election officials in every state said there was no sign of significant voter fraud.

Claim: ‘The attack on the Capitol was done by antifa’

After Trump supporters breached the U.S. Capitol on Jan. 6, social media users and allies of the president claimed antifa, a loose coalition of left-wing activists, was to blame. But specific individuals who were rumored to be antifa activists don’t actually support the movement, and a report that claimed a facial recognition firm had identified members of the movement was later corrected.

Meanwhile, plans to "storm the Capitol" were drawn up in the open on social media forums and pro-Trump websites. Video and photographs from Washington show people wearing and waving Trump-branded hats, T-shirts and flags. Some rioters celebrated their participation or live-streamed the events, including a West Virginia GOP lawmaker.

Claim: ‘I got (a) call Tuesday night at 11:30 that the ISI from Pakistan was now in the voting machines in Georgia’

There is no evidence that a foreign country hacked voting machines in Georgia.

In November, the state’s top elections official ordered an audit of a random sample of voting machines to determine whether any had been hacked or tampered with. The audit found "no sign of foul play."

Georgia also conducted two recounts — including one conducted by hand — that reaffirmed Biden’s victory. The secretary of state’s office has debunked other claims that people were able to hack into Georgia’s voting systems.

Claim: An Italian military satellite was ‘changing votes’ in the 2020 election

The theory goes like this: An employee in the U.S. embassy in Rome worked with a board member of Leonardo, a defense contractor, to commit voter fraud in the 2020 election. Leonardo used a military satellite to change votes from Trump to Biden in key battleground states.

Those claims are baseless.

Federal and state officials have said there is no evidence that voting systems were breached during the 2020 election, or that voter fraud affected the outcome. CISA said on its rumor control page that bad actors would not be able to change election results without being caught.

Claim: In Georgia, ‘cases underneath the table’ at a voting center were evidence of voter fraud

This is wrong — we rated a similar claim False.

The video McInerney referenced was introduced by Trump lawyer Rudy Giuliani and his team during a Dec. 3 hearing with Georgia state legislators. At the time, social media posts claimed the footage showed election workers at State Farm Arena in Atlanta illegally counting suitcases filled with ballots after observers left the room.

"The 90 second video of election workers at State Farm arena, purporting to show fraud was watched in its entirety (hours) by @GaSecofState investigators," Sterling tweeted, linking to a fact-check from Lead Stories. "Shows normal ballot processing."

In reality, the video showed workers processing ballots in standard containers while observers were still in the room. Georgia officials said no one was told to leave; some observers exited after election workers had finished their jobs.

Claim: ‘There was some people in there that was special forces mixed with antifa and they took her (House Speaker Nancy Pelosi’s) laptop and they have that data’

McInerney is wrong about antifa, and he is also wrong to say that the U.S. Army Special Forces took a laptop with incriminating information about House Speaker Nancy Pelosi from her office during the Capitol riot.

PolitiFact confirmed that a laptop was stolen from a conference room in the Capitol, but Pelosi spokesman Drew Hammill said that the laptop was only used for presentations.

The Daily Beast, "Team Trump Finally Disavows Pizzagate Theorist Who Boasted of Being on 2020 Board," Jan. 23, 2019