Tucker Carlson
stated on November 1, 2021 in his documentary series "Patriot Purge":
“Jan. 6 is being used as a pretext to strip millions of Americans, disfavored Americans, of their core constitutional rights.”

In the first part of Tucker Carlson’s controversial and conspiratorial documentary series attempting to rewrite the events of Jan. 6, the Fox News host claimed that the attack on the U.S. Capitol is being used as a front to justify a "purge" of Donald Trump voters and a new war on terror.

The series started airing Nov. 1 on Fox Nation, Fox News’ subscription streaming service. It was produced as part of a multiyear deal Carlson signed to make specials for Fox Nation, and it was co-written by Scooter Downey, who previously directed films for far-right figures. On Fox News’ flagship morning show, "Fox & Friends," Carlson defended the series as "rock-solid factually."

Yet the first installment of the three-part documentary, titled "Patriot Purge," advances several conspiracy theories about the insurrection, including that the violence of the day was spurred on by left-wing instigators and agent provacateurs in disguise, and that the siege may have been a trap orchestrated by the FBI. It also includes sympathetic interviews with conservatives involved in the day’s events, such as "Stop the Steal" organizer Ali Alexander.

The film opens with a video montage juxtaposing footage and commentary related to the Sept. 11, 2001, attacks, the Abu Ghraib prison, Guantanamo Bay and Islamic terrorism with footage and commentary about Jan. 6 and the government’s prosecution of the rioters. Elijah Schaffer of BlazeTV, a conservative outlet, is heard describing the Jan. 6 charges as "political persecution."

A little more than two minutes in, Carlson took over the screen, saying:

"In the years after 9/11, the media and the national security state used exaggerated threats and outright deception to associate certain ideas with certain events. This was the first war on terror. Now, it’s happening again.

"The very same corrupt interests in Washington that pushed the Iraq War under false pretenses are now pushing the lie of a domestic white terror. They are tying white nationalist terrorism to Trump voters. They’re tying Jan. 6 to 9/11. They’re tying millions of law abiding Americans to al-Qaida and ISIS. Jan. 6 is being used as a pretext to strip millions of Americans — disfavored Americans — of their core constitutional rights, and to defame them as domestic terrorists."

Carlson provided no evidence to explain how "millions of Americans" are getting stripped of their "core constitutional rights." Regardless, the claim is far from accurate. And the hundreds of charges brought after Jan. 6 were handed down to people who broke laws as they stormed the Capitol, clashed with police and disrupted congressional proceedings in an effort to overturn the 2020 election results. Most were Trump supporters. 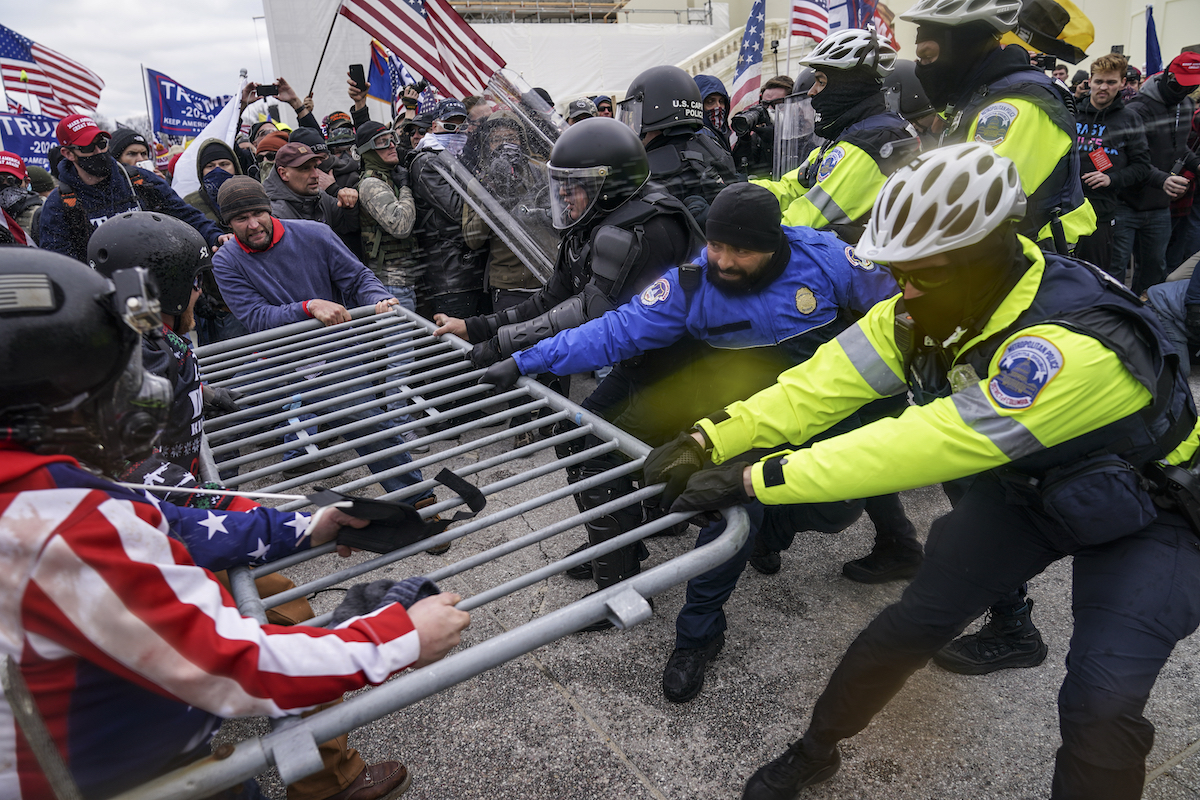 Supporters of President Donald Trump try to break through a police barrier at the U.S. Capitol in Washington on Jan. 6, 2021. (AP)

"I’m not aware of anyone being stripped of constitutional rights because of alleged involvement in the Jan. 6 assault on the Capitol, let alone ‘millions’ of people," said David Alan Sklansky, professor of law and faculty co-director of the Criminal Justice Center at Stanford Law School.

​​Fox News did not offer a comment for this fact-check.

Nine months after the violent and deadly attack, the Justice Department has arrested about 650 people for involvement, including on charges related to destroying or stealing property, carrying firearms or other weapons, assaulting officers, obstructing official proceedings, and conspiracy. The case details are often spelled out in publicly available arrest warrants turned over to judges.

More than 85% of those people were charged in part using evidence from their own or others’ social media accounts, according to George Washington University. Some live streamed their participation in the day’s events, while others defended or boasted about it on social media.

The riot also included members of some white supremacist groups, along with members of far-right extremist militia organizations like the Proud Boys and Oath Keepers.

But there’s no evidence that anywhere close to the 74 million people who voted in 2020 for Trump have been stripped of constitutional rights post-Jan. 6. An estimated 2,000 to 2,500 people entered the Capitol on Jan. 6, according to the Washington Post. One- to two-thirds of them, then, have not been arrested. And among those who have, the arrests haven’t extended beyond the people who were involved that day.

Even among those charged, there’s no evidence that their constitutional rights are under threat, said Michael Jensen, a senior researcher at the University of Maryland’s National Consortium for the Study of Terrorism and Responses to Terrorism. "Nor are there any legal proceedings, legislative debates, or law enforcement actions underway that could result in that outcome." 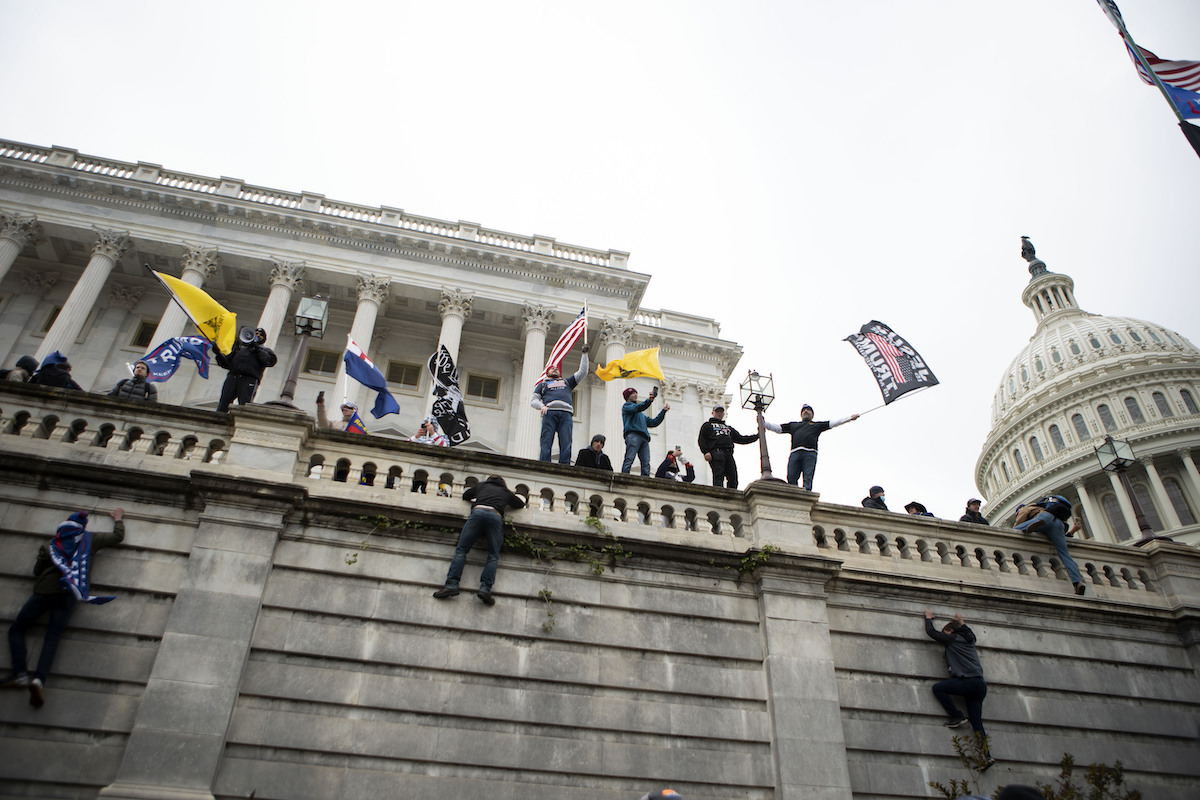 A federal judge in October referred a D.C. jail to the Justice Department after finding that it failed to turn over information needed to approve surgery for a defendant’s broken wrist. Some Jan. 6 rioters have also spent time in solitary confinement, PolitiFact reported in July.

But as PolitiFact reported at that time, the vast majority of the Jan. 6 defendants have been released from custody while awaiting trial.

"More than 90% of the individuals who have been charged for participating in the insurrection have been granted release pending trial," Jensen said, citing the Justice Department’s public database of cases stemming from Jan. 6.

Of those who have pleaded guilty and been sentenced, only a handful have been set to serve any time in jail, Jensen said, and most will serve only 45 days. "These are hardly draconian criminal justice outcomes," Jensen said.

Nationwide, a significantly lower rate of federal defendants are released pretrial. And an August analysis from the Associated Press countered conservative claims that the pro-Trump rioters on Jan. 6 have experienced harsher treatments than protesters arrested over the summer of 2020.

"It's ridiculous to compare the post-Jan. 6 investigation and prosecutions to what happened after 9/11. People were held without charges post-9/11. People were tortured," added Sklansky, the Stanford Law School professor. "There is nothing remotely equivalent to that happening."

In "Patriot Purge: Part 2," released Nov. 2, Carlson furthered the same theme, telling viewers there is "a new war on terror" focused on "hunting down American citizens, purging them from society, and throwing some of them into solitary confinement." He claimed that the government’s response to Jan. 6 is really "a purge aimed at the legacy Americans" and "inconvenient citizens who vote the wrong way." And he warned, "It took a decade for the federal government to find Osama bin Laden. They can find you a lot faster. They likely already have."

In his film, Carlson said, "Jan. 6 is being used as a pretext to strip millions of Americans — disfavored Americans — of their core constitutional rights."

There is no evidence that the hundreds of people arrested for participating in the assault on the Capitol have been stripped of their constitutional rights, let alone that millions of Trump supporters are also under threat of losing their rights.

There is also nothing pretextual about the prosecutions, which have targeted only those who breached the Capitol, assaulted police or committed other crimes during what was an historic attempt to overturn an election. Many rioters posted about their involvement on social media.

The Guardian, "Revealed: majority of people charged in Capitol attack aren’t in jail," May 28, 2021

PolitiFact, "‘Everything we trained for’: How the far-right Oath Keepers militia planned for violence on Jan. 6," Sept. 23, 2021

PolitiFact, "Misinformation and the Jan. 6 insurrection: When ‘patriot warriors’ were fed lies," June 30, 2021

PolitiFact, "The ridiculous claim that those at the Capitol Jan. 6 resembled a 'normal tourist visit,'" May 13, 2021

Email interview with Michael Jensen, senior researcher with the National Consortium for the Study of Terrorism and Responses to Terrorism at the University of Maryland, Nov. 2, 2021